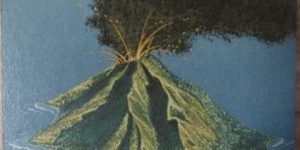 Welcome back to Consigned, Cool, & Collected, wherein we here at Back to the Past stop to smell the roses and admire the cool stuff we sell. Today we’re looking at some lots from our October 14th session of Magic Cards, Comic Books, & Collectible Toys, specifically Magic: The Gathering “Dual Lands” cards and why the ten of them were worth around $2000 total.

Inspired by the legendary tabletop role-playing game Dungeons & Dragons, Magic: The Gathering is the brainchild of Mathematician and game designer Richard Garfield. In 1991, he was pitching a cooperative board game called “RoboRally” to various publishers and one of them was a brand new outfit established by Boeing system analyst Peter Adkison named Wizards of the Coast.

Adkinson liked the game, but felt it was entirely too ambitious for his fledgling company to publish at the time. He mentioned to Garfield that he was looking for a portable game that could be played in the downtime at gaming conventions, an idea that stuck with Garfield after the meeting. Revisiting a system he’d been working on on-and-off since childhood, then named “The Five Magics”, Garfield developed a card game centered around battling with color-coded card types in a magical setting reminiscent of D&D’s world. It was designed so that the player could build their customized deck the same way that an RPG player built a custom character. Magic: The Gathering was born.

It was a HUGE hit for Wizards of the Coast and almost single-handedly launched the American Trading Card Game industry – if you caught the Yu-Gi-Oh! reference in this article’s title, you can (indirectly) thank Richard Garfield for that.

The source of magical power in MTG is “Mana” and it is generated by “Lands” cards. Simply put, the player lays down a water-based land card, like an Island, and it generates Blue Mana that lets you fuel the abilities of water-based cards like Merfolk.

In the very first set of cards, which was just called “Magic: The Gathering” when it debuted but has since picked up the name “Limited Edition” (since the second set was called the Unlimited Edition), there were ten Lands cards that had something special about them: they generated two types of Mana rather than one. This made the cards very versatile and offered a terrific advantage to players who utilized them, which is why Richard Garfield had them designated as rare, I.E, less likely to be found in booster packs, to prevent them from breaking the game. They would continue to be part of the core set of cards through the 1994 revised edition, the printing we had.

Dual Land cards have remained a fixture of the game’s design, but those original cards remain highly sought after to this day. The Volcanic Island is perhaps most sought after, if our results are anything to go by, in part because it was not part of the original “Alpha” printing of cards due to a mistake. It makes it just that little tiny bit rarer than the other nine.

Rarities like these are why it never hurts to let collectibles experts, like us here at Back to the Past, look through your stuff before deciding it belongs in the trash. And for the history of even MORE cool stuff as it floats through our humble shop, keep your eyes right here for more Consigned, Cool, & Collected items.