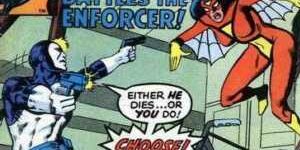 No, not the fabled snipers who keep spoiler factories Tom Holland and Mark Ruffalo in line, the Ghost Rider and Spider-Woman villain from the 70s! He’s the subject of this week’s My Hero, our regular dip into the depths of our artful Custom Action Figure Collection.

The Son of a Big Shot

Charles Delazny, jr. was the son of fictional movie studio executive Charles Delazny, sr. and he broke way bad. Adopting a blue & white costume, he embarked on a career as a costumed mercenary under the name “The Enforcer”. His first battles were with Ghost Rider in the pages of 1977’s Ghost Rider #21-24, in which the burning biker was hot on the trail of a disintegrator ray The Enforcer had hired another costumed gun-for-hire to steal for him. He battled the Spirit of Vengeance with little success, losing his ray in the process despite escaping to fight another day.

The Enforcer’s next major assignment was working as the, well, chief enforcer for the criminal Committee. In this capacity, he battled the Werewolf By Night and got beaten again. He would later blackmail Spider-Woman into aiding him in a scheme to retire, a scheme that (predictably) backfired.

His final assignment came from Madame Masque, who hired The Enforcer to kill Iron Man. Unfortunately, he wouldn’t even meet old shellhead before he became the first victim of the Scourge of the Underworld in 1985’s Iron Man #194. After Scourge’s capture, he would claim to be Delazny’s heretofore unmentioned brother and that he’d embarked on his murder spree to avenge the family’s honor…only to be killed by a different Scourge, throwing the whole story into question.

My first encounter with the Enforcer would have been when I read the Official Handbook of the Marvel Universe, specifically its coverage of Scourge’s many victims. I fell in love with the character when the second one, Delazny’s heretofore unmentioned nephew Mike Nero, took up the costume in Dark Reign: Made Men #1 back in 2009. I’m a sucker for super-villains for hire, and remain bummed that Nero’s only made a couple of appearances. Still, I have the artfully crafted figure from our custom collection to console me.