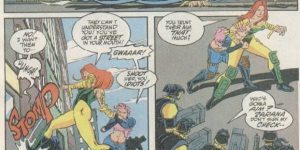 Welcome back to Hammer Drops, your source for tips and tricks for getting the best value from your collection!  Today, we’re taking a look at the G.I. Joe: A Real American Hero Alley Viper (1994) figure we recently sold on eBay for a cool $72.56.

While the G.I. Joe franchise dates back to 1964 and is quite literally the original action figure, the particular iteration we’re looking at today began in 1982. Shrinking the scale to 3.75″ from 12″, Hasbro’s G.I. Joe: A Real American Hero line focused on a wide and highly collectible range of unique figures. It also, for the first time in the line’s history, provided Hasbro’s military men with an enemy to fight: the terrorist army known as Cobra!

Unlike the G.I. Joe team, which consisted of dozens of unique characters, Cobra’s ranks were bolstered by generic soldiers call “Vipers” that were subdivided into various specialties with unique uniforms. The Alley Vipers, Cobra’s urban warfare unit, were originally introduced in 1989 with two updated versions arriving in toy stores before the line’s cancellation in 1994. The one we sold is specifically the third and final version.

Simply put, things are rarely cancelled at the height of their popularity. Creative works may end voluntarily while still going strong, but generally speaking, corporate works like comic books, network TV shows, and toylines only end suddenly when they don’t sell anymore.

Such was the case with G.I. Joe, which ended with figures meant for 1994 and 1995 in various states of production. Ergo, this Alley Viper would have been among the very last G.I. Joe toys released. That, dear reader, is why a generic trooper (even one mint-on-card) with a repainted body would sell for $72.56: it didn’t sell very well back in 1994. That means the number of high quality specimens out in the world is going to be much lower than that of most figures from the ARAH line.

The same general rule has proven true of final issues of long-running titles that have faded in and out over the years, like Vampirella or Aquaman, too. Even the uninitiated know that the first issue of a comic or the first wave of a toyline can have some serious collectible appeal, but collectors often look the hardest for those specimens released near the end! Turning experts like those of us at Back the Past loose on your collection helps make sure things like that don’t get missed, so contact us if we can be of assistance.

Come on back in two weeks for even more Hammer Drops!