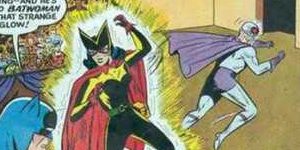 Welcome back to My Hero, where I present you with an obscure character from Back to the Past’s Custom Action Figure collection and tell you why they’re worth knowing. Today, we’re looking at the only classic Starman not folded into James Robinson’s expanded Starman mythos in the 90s – the villainous one from 1960’s Detective Comics #286.

Detective Comics #286 saw Batman & Robin once more team up with the original Batwoman, who had recently added a nifty belt from Tibet to her costume. The trio battled a new costumed crook named Star-Man, whose forehead mounted star charm granted him fantastic strength and power over gravity.

These powers were making him a most dangerous opponent until Batwoman’s mere presence seemed to weaken him. After the crook retreated to fight another day, the Dynamic Duo discovered that Batwoman’s new belt was more than just a fashion accessory – it was the final component needed to make Star-Man’s charm an unstoppable power source! Functioning at the belt’s buckle, it would grant the wearer far greater versions of the powers it bestowed on its own. Conversely, the belt without the charm would drain a body’s life energy until the wearer died while counteracting the charm’s powers. It was the Silver Age of Comics, rules on magic artifacts were often precise, complex, and contradictory.

Batwoman, being a true hero, decided to keep wearing the belt to battle Star-Man – sure, it would be bad if the crook got his hands on it but it is also the only thing that can counteract his powers. She manages to weaken him enough that the Dynamic Duo can take him off the board and combine his charm with the belt, saving Batwoman’s life. The trio then resolves to destroy the belt, lest it be misused again.

The name “Starman” has a proud history at DC Comics, and pretty well all the different versions were used by writer James Robinson in his seminal 1994-2001 series. Heck, even a 1957 one-off story where Batman assumed the name was folded into the mythos, with Justice Society member Dr. Mid-Nite taking up the name as a favor to the Golden Age Starman!

This version and his mystical star belt were, so far as I can tell, the lone exception to that. That makes the character a fun historical oddity in DC’s publishing history, certainly more noteworthy the many other one-off Batman villains of the Silver Age.