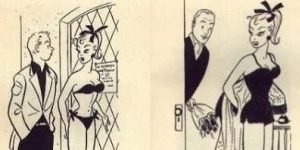 Welcome back to Consigned, Cool, & Collected, where we pause to appreciate the cool stuff we here at Back to the Past are surrounded by every day. Today, since we’ve spent so much time on so-called Boy’s Toys lately, we’re looking at some reproduction dolls from Mattel’s “My Favorite Barbie” line from our eBay store. Plus, we’re looking at what was going on with the famous fashion doll when these designs were originally created.

The initial idea for that would become the Barbie doll originated from observations made by Ruth Handler, wife of Elliot Handler AKA the “el” in “Mattel”,  while watching her daughter play with paper dolls. Barbara Handler would often cast her dolls in “grown-up” rolls during play, and her mother noted that there was no doll on the market filling that niche.

A trip to Europe in 1956 would introduce Ruth to the “Bild Lili” doll, a buxom fashion doll based on the star of a comic strip chronicling the misadventures of a high-class sex worker. Presenting the German doll to her husband as a proof that her idea could work, Elliot pretty shamelessly cribbed its design to bring a Mattel version to market in 1959. Naming it after the daughter that inspired the initial idea years before, Barbie was born.

Two major things happened to Barbie in 1961: she met a boy, and she got sued. With Barbie having been majorly successful for two years, Mattel decided it was time for the toyline to expand and their girl to start going with a boy far more wholesome than any of her inspiration Bild Lili’s suitors. Thus, the buff-but-bland Ken – clad in swim trunks to accompany Barbie’s standard swimsuit – made his debut on store shelves.

Speaking of Barbie’s German predecessor, 1961 saw rival toy company Louis Marx and Company sue Mattel for patent infringement on the Bild Lili doll, which they had recently licensed from German manufacturer  Greiner & Hausser for release in the U.S. The suit would drag on for two years before ultimately being settled out of court. In the meantime, befitting someone going through a tough time, Barbie adopted a drastic new hairstyle: a “bubble cut”  thought to be inspired by then First Lady Jackie Kennedy.

1964 featured Barbie getting yet another new haircut and making financial moves to secure her legal future. On the business side of things, Mattel bought Greiner & Hausser’s copyrights, trademarks, and patents on the Bild Lili doll outright for $21,600 (that’s $181,356.39 in 2020 dollars, which frankly still seems pretty low). Thus, no more could rivals license the doll and either compete with or try to destroy Mattel’s flagship fashion doll.

And to celebrate, Barbie got a fashionable new swirl ponytail look to replace the bubble cut.

It seems silly that something as simple as a new hairdo could mark a major epochal change in a doll, but it does and that’s why letting experts like us at Back to the Past have a look at your collection before handing it off to your grandkids is a good idea. And for more toy history, keep our blog bookmarked for more stuff that’s Consigned, Cool, & Collected!