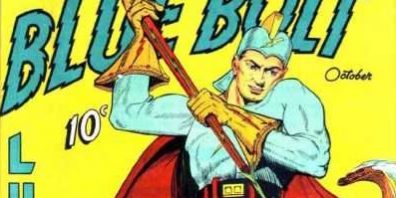 Welcome back to My Hero, wherein we here at Back to the Past identify and delve into the obscure characters from our custom action figure collection. Years ago, we purchased the life’s work of an artist and comic fan whose chosen medium was granting forgotten comic characters the action figure immortality denied to them by major toymakers. This week’s selection is early Joe Simon creation The Blue Bolt! 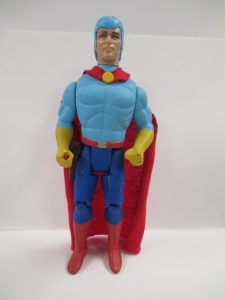 The Blue Bolt as he appears in our custom figure collection. His head fin was lost in transit, but he is otherwise dead-on.

Blue Bolt Comics #1 hit stands in June 1940, one of the earliest comics to share the name of one the characters featured inside! Harvard football hero Fred Parrish was practicing with two of his teammates on a remote mountaintop when they were struck by lightning. Fred was the lone survivor and returned to their private plane to make his way back to civilization. Once in the air, the plane was struck by lightning and crashed in a deep valley.

Fred awoke in the subterranean laboratory of Dr. Bertoff in the underground nation of Deltos. Bertoff had healed Fred’s injuries using radium AND harnessed the lightning still in the young man’s body to give him fantastic abilities. To repay his benefactor, Fred used those new powers to become The Blue Bolt and fend off an invasion from the stygian kingdom of Voltos, ruled by the wicked Green Sorceress.

Fred would split his time between foiling crooks on the surface and battling the Green Sorceress’ forces underground until the onset of World War II. At that point, he forsook Deltos for good and focused his efforts on Nazi fighting. After the war, he went about as far from Deltos as he could and became a private pilot for a news magazine in his civilian ID until his series converted to horror in 1953.

Simon & Kirby: The Beginning of a Beautiful Friendship 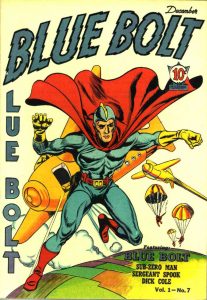 The Blue Bolt as he appeared in Golden Age comics.

Blue Bolt’s origin and subterranean science fantasy adventures are reminiscent of trailblazing Space Opera/American Isekai action heroes like Flash Gordon and Buck Rogers, with the difference that he could return home whenever he wanted. Blue Bolt’s “superhero to two civilizations” schtick was pretty gosh-darned unique until DC aped it for Adam Strange, knowingly or otherwise. While the character’s first appearance was written and drawn by Joe Simon, the second issue of the series saw him team up with Jack Kirby for the first time. Their legendary partnership would go on to give the world Captain America, among many others, and it started on Blue Bolt Comics.

Even with the character’s interesting circumstances and important spot in comics history, he still remains hopelessly obscure. As such, anybody looking to put him on their shelf has to look to customizers like the lovable loon behind the My Hero Collection to fulfill their wishes. Come back next week for another selection from the collection and hit up Comic Book Plus to in the meantime to read the adventures of the Blue Bolt. And if you’ve got collection like this– be it original art, custom action figures, convention sketches, whatever – and are looking to sell it, we would love to help you!