Just What Is a Pickle Castor? 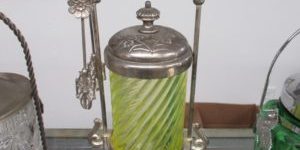 Welcome back to Consigned, Cool, & Collected, where we stop to learn a bit of the backstory behind the cool collectibles we sell. Today sees us taking a step away from our usual pop cultural comfort zone by looking at Pickle Castors, a type of antique item that just came into the shop.

In Victorian England, the pickle castor was initially introduced as just another fancy piece of serving ware, meant to carry pickled produce. Being able to have one was a kind of status symbol, as it usually correlated to being able to afford household servants. Simply put, pickling veggies simply wasn’t a standard pastime for urban households but it was something that you could ask your kitchen staff to do for you. As such, a pickle castor was a way of bragging “We can pay people to pickle stuff and then put in this ornamental jar to garnish our dinner with” for a household.

Between 1860 and 1890, the pickle castor grew in popularity and therefore grew in complexity. The glass jar portion of the castor would typically be an ornate piece of glass and the metal holder-and-matching-tongs grew increasingly detailed to compliment that. The designs would include flowers, gargoyles, basically anything you’d find on an ornate metal gate.

Like most popular status symbols, pickle castors eventually fell out of fashion and became seen as tacky. This coincided with the end of the Victorian era in 1901 fairly closely, leaving the already mostly-non-functional pieces to languish at the back of china cabinets or be thrown away. We have to imagine that the great depression and second World War did their part to do in many of specimens as well.

Fast forward a century past the height of the Pickle Castor’s popularity, to the 1980s. The collector’s market for antiques was growing, and the appreciation of the handmade glassware of yesteryear was one of its largest sectors. The public rediscovered the pickle castor as part of that and made it a highly sought after item once more, with particularly well-preserved original specimens selling in the four figures. The glass in particular is the selling point, though you can easily find original metalwork with reproduction glass. Market demand has fallen since the 80s, but these can still be $100+ pieces.

Our specimens, which include a mix of genuine antiques and some vintage  glass reproductions, are in that range. It can be tricky to spot the originals versus the reproductions, so that’s one reason why you should let us have a look at the unrecognizable oddities in your granny’s china cabinet before carting them off to goodwill – you never know when something might be worth being Consigned, Cool, & Collected!