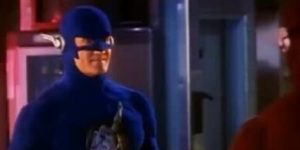 Welcome back our ongoing examination of the voluminous My Hero Collection of custom action figures! This one takes us away from the world of comic books, though not very far, as today’s hero is Pollux from the 1990 TV series The Flash!

Bringing a Proud Tradition to Television

Before we talk in detail about Pollux, we gotta go into the history of the Reverse-Flash concept. 1949’s Flash Comics #104, the final issue of the series, featured a Flash story wherein Jay Garrick did battle with a criminal “Rival Flash” with speed powers of his own. Jay’s successor, Barry Allen, would pick up his own Rival Flash in the form of Professor Zoom, The Reverse-Flash in 1963’s Flash #139. Barry’s successor Wally West got his own speedster rival in 1987’s The Flash #5, though Speed Demon (his girlfriend’s estranged and deranged husband) would have a very short tenure as a bad guy. Suffice it to say, the rival speedster was a well-entrenched concept by the time The Flash hit TV screens, and nowadays nearly every single speedster in the sizable Flash family has at least one Reverse-Flash double.

Which brings us to “Twin Streaks“, the eighteenth episode of the show’s only season. In that episode, the Intellagen Corporation is trying to re-create The Flash’s powers for commercial purposes. The problem is that all their test subjects burn out and die before they can get any useful data, so they conspire to steal a sample of The Flash’s blood and clone him directly. They dubbed the clone “Pollux” and set about educating him, as they had created a fully-grown man with super speed powers and the emotional intelligence of a toddler.

Unfortunately, their ability to control Pollux is sorely lacking and he escapes the lab to go joyrunning – wearing his blue Flash costume with the Intellagen logo on the front. A chance encounter with the REAL Flash (Barry Allen) and his girlfriend Tina McGee gives Pollux an identity crisis and a crush, neither of which are helped by his creators angrily informing him that he’s not even a real human. This sets him up for a series of conflicts that end with the scientists dead and Pollux taking a bullet meant for Barry Allen in an act of heroic sacrifice.

I fully experienced The Flash TV series when I got the complete series DVD set for Christmas in 2006, though I have vague memories of catching reruns on TV before that (including this episode). I love the series for capturing the weird, Batman 1989-influenced superhero aesthetic that defined the comic book movies of my elementary school years (The Shadow, The Phantom, Dick Tracy, The Rocketeer, and of course the two Tim Burton Batman flicks). From a comic-character-nerd standpoint, I like Pollux because he is a perfect reflection of what non-Flash speedsters were in late 80s & early 90s DC Comics (which is to say, ethically questionable science experiments geared at recreating The Flash) while still fitting much better into the Reverse-Flash role than most of his comic contemporaries. Like the whole TV series, Pollux is a mere footnote in the history of The Flash, but I was beyond delighted to find we had a custom action figure of him. For that reason, he’s My Hero…this week.