Kenner: The King of the Action Figure 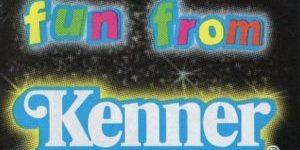 Welcome back to Consigned, Cool, & Collected, where we stop to look deeper into the cool stuff we at Back to the Past deal with every day. Today we turn our eyes to our eBay store and this nifty 1997 Kenner Toys Trailer VHS tape and the last days of the King of the Action Figure.

The Birth of the Modern Action Figure

We’re going to skip a lot of history and jump right to 1978, the year that Kenner debuted its Star Wars toyline. While it may not have created the idea of the 3.75-5″ action figure, the original Star Wars line certainly popularized it and made it a key feature of toy store shelves. It was a massive success that put Kenner on the map as one of the big boys in the toy market.

Kenner would follow up that success with, in addition to toys for successive Star Wars movies and cartoons, the Super Powers Collection of DC Comics action figures. They would briefly lose that license to rival Toy Biz, but would reclaim it in time for the debut of Batman Returns and Batman: The Animated Series in the early 90s thanks to Toy Biz’s increasingly cozy relationship with DC’s rival Marvel Comics. A highly successful toyline based on The Real Ghostbusters would take up the slack left by the loss of Batman and friends.

1991 saw Kenner’s corporate parent, Tonka, acquired by G.I. Joe & Transformers maker Hasbro. Hasbro would use Kenner as their primary action figure brand in the 1990s, with a focus on movie and TV licenses. They produced toys based on DC Comics’ properties (including comics, TV shows, and movies), Jurassic Park 1 & 2, Aliens, Predator, Terminator 2, Waterworld, Disney’s Gargoyles, Saban’s V.R. Troopers, professional sports, American Gladiators, and much more. Heck, Hasbro even put them in charge of attempts to revive their flagship franchises with G.I Joe: Extreme and Transformers: Beast Wars, with the latter proving a big success.

1995 saw Kenner bring Star Wars back to toy store shelves after ten years of dormancy, with the company being a key part of 1996’s Shadows of the Empire multimedia initiative. The Special Edition re-releases of the original Star Wars films in 1997 only drove the popularity of their figures to new heights.

The High Note & The End

The tape in question, which consists of commercials and sizzle reels for Kenner’s various lines, comes from arguably one of Kenner’s best years of the 1990s. 1997 saw both Beast Wars: Transformers & Superman: The Animated Series entering their second year on televisions and toy store shelves, the aforementioned Star Wars re-releases driving revived interest in the property’s merchandise, the release of the deliberately toyetic Batman & Robin, and the debut of the The New Batman Adventures on televisions and toy store shelves.

It would take just two years to bring it all crashing down. First, an attempt to continue the Jurassic Park line past the movies, called Jurassic Park: Chaos Effect, debuted in 1998 and under-performed without an active media tie-in. The Beast Wars: Transformers cartoon came to an end in 1999, the same year that Kenner went all-in on Star Wars Episode One: The Phantom Menace. While the movie was a hit, sales of the toys did not match. Hasbro had to trim some fat and closed the Kenner offices in Cincinnati, folding some its employees and all of its brands into Hasbro central in Rhode Island.

Thus was the end of the King of Action Figures, not with a bang but with a whimper. They changed the face of the American toy store forever, and produced a lot of the nifty vintage action figures we’ve been auctioning off from the Florida Collection, of late. Kenner is long gone, but far from forgotten.

That makes this VHS tape of old commercials a pop cultural artifact worthy of a museum, a fact that might escape the untrained eye. That’s why it pays (often literally) to let us here at Back to the Past look at your collection before hauling it to the donation center – you never know when we’ll find something that should be Consigned, Cool, & Collected.