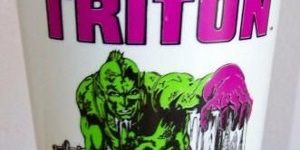 Hey, how you doin’?  I’m back this week with a repeat Fabulous Find, looking at the 1975 Marvel Comics Slurpee cups.  In 1975, I was a young man attending college and working in the college’s bookstore to earn some extra bucks and I discovered that the chain store, 7-11, was selling their slurpees in plastic cups featuring different Marvel Comics characters!  So at lunch time, or on breaks, I use to drive up to the local 7-11 and buy myself a slurpee in one of the Marvel cups.

I soon discovered that I couldn’t drink enough slurpees to get all of the individual cups I desired, so I started taking my fellow bookstore employees with me and I convinced them to buy slurpees too, and then give me their cups! I soon discovered that there tended to be duplicate cups purchased and as a collector I wanted different cups, not doubles!  Generally this wasn’t a big problem, because most 7-11 clerks were willing to go through a few cups to try to get ones I wanted, but occasionally the employee refused to “dig” through the cup dispenser.  Then, let me tell you, I was definitely an unhappy customer!

Of course, this led to trips to find new and different 7-11s that might have different cups for sale!  I think we pretty much covered a ten mile radius in my /our efforts to find different cups.  Sometimes we only had enough time to drive to the 7-11, buy the slurpees and rush back to the bookstore!  At the time I had no idea that there were sixty (60) different cups.  I just checked the ones I still own and I only have twenty-six (26) of the sixty cups in my limited collection.  So less than half, which I guess is a good thing, otherwise if I had closer to a full set, I’d be trying to buy the missing ones to complete the collection.

Here’s the checklist which I found on line for 1975 Marvel Slurpee cups: 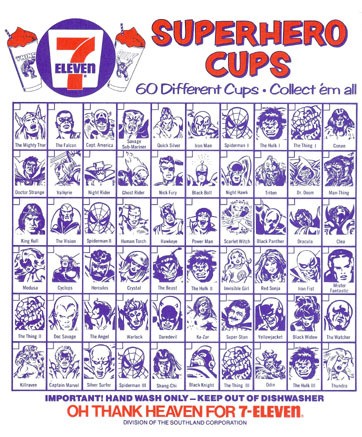 Some of my favorite cups, at least of the ones I own, are the Inhuman Triton, drawn by Neal Adams, Killraven, from Amazing Adventures’ War of the Worlds feature, drawn by P. Craig Russell, Conan by Barry Windsor Smith, Nick Fury by Jim Steranko, as well as, the Man-Thing drawn by Michael Ploog!

Here’s a closer look at a couple of the cups from my collection: 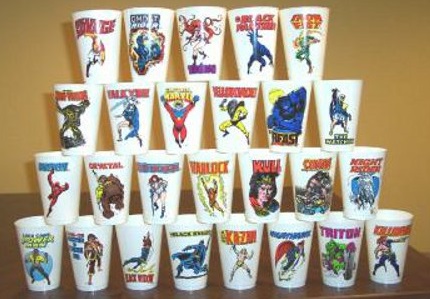 One nice thing about this series was that the cups provided the characters name and or logo on the same side as the character, as you can see from the pictures.  Plus, on the reverse side was a “head shot” of the character telling you about themselves.  For example on the Triton cups, the reverse shows his head and a word balloon which read; “As one of the Inhumans, I am considered an outcast by mankind.  They fear the power to swim the seven seas, the power to commune with those who dwell in the deep … They fear the power that is Triton!”  Pretty darn cool, eh?

Another example, from the back of the Spider-Man cup that I have; “The Green Goblin! Doctor Octopus! The Lizard! None of these insidious masters of evil would ever have bothered Peter Parker … I guess I was asking for trouble the day I became the Amazing Spider-Man!”  Here’s a closer look at both the front and back sides of a couple of cups: 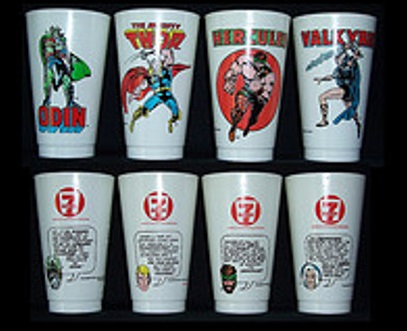 So there you have it, this week’s revised Fabulous Find, but believe it or not, that is not all of the 7-11 Slurpee cups I have in my collection!  Oh, no, the Marvel cups proved to be so popular that in 1977, Marvel and 7-11 teamed up once again to bring an all new set of Marvel character cups to us collectors and fans!  So sometime in the future you can expect one more column on that edition of cups, though who knows when I’ll get around to those!  I wouldn’t want to overload your sweet tooth, now would I?

So till next time, go out an enjoy a Slurpee, tell them I sent ya!  Not that that will get you anything.  Anyway, please come back again next week for a new RETRO REVIEW and again in two weeks for another, hopefully new, Fabulous Find.  Til then, be seeing you …