My Golden Age: Our Hero Finds a Lifelong Friend

I met my best friend when I was ten years old. It was the summer of 1992, the fourth of July, to be exact. My parents were invited to a barbecue at a friend’s house, from church. I, being ten, got dragged along, whether I wanted to or not. Doomed was I to spend a day full of overhearing adults say things like “well Marnie, my back pain is flaring up again” or “Oh! I haven’t eaten there. What’s that you say? Affordable but such large portions!?” Neither of these discussions interested me at the age of ten, and just so we’re clear, they still don’t at thirty.

When I wandered into the backyard, I noticed a kid named Chris I recognized from Sunday School, sitting under a tree, by the pool. I headed over there and we begin talking about whatever kids talk about at ten (I can assure you it had nothing to do with physical ailments or the price of the Big Boy special). Noticing our boredom, Chris’s dad suggested that we head next door and grab some of Chris’s toys to play with (What luck that he lived next door to that boring party!). We headed over there and to my ninja turtle-backpack-loving (continuity!!!) surprise, Chris loved the turtles as well. We spent the afternoon discussing turtles, why Indiana Jones was a far better hero than anything Stallone or Schwarzenegger could possibly aspire to be (C’mon! He was a Professor! Nerds unite!) as well as a multitude of other subjects near and dear to the hearts of children. A friendship was started, a tiny spark lit. We talked every now and then, stayed in touch at church (we didn’t go to the same school unfortunately, if we had, he would have backed me up on the backpack nonsense for sure) and would occasionally get to hang out when our parents met for Bible study. All that was about to change.

One Saturday morning, with my love of the Teenage Mutant Ninja Turtles waning, I begged and pleaded with my mother to take me to the local Toys R Us so that I could check out the X-Men figures. That’s right, I was about to turn my back on one set of mutants, only to fall madly in love with another group of mutants, and not the high school puppy love, but full on ‘til death do I part, for better or worse, sticking with the ups and down love. We headed to the store and my wonderful mother allowed me to pick an action figure out. I chose Gambit (I will defend him to my death! He’s a good character!) and I got a free comic to boot! (Continuity again!!!) I headed home super excited with my toy, my newfound love for the 90’s X-Men cartoon, and a comic book! How fantastic! Now, how do I break this to my turtle loving friend Chris, will he understand? Will this be the schism that tears my only friendship apart?

I called Chris up on the phone, from my memory this is how the conversation went…

Me: “Hey Chris, I’ve got something to tell you, don’t make fun of me. You know that X-Men show? I’ve sort of been getting into that lately and I went out and bought one of the toys. It’s probably super nerdy, please don’t make fun of me. I’m just kind of over the turtles and this thing has got me really excited.”

Chris: “That’s so weird, I just got home from Target, my dad took me there, and I got an X-Men toy too! I got a guy named Cyclops. I’ve been watching that show too, I just didn’t say anything because I didn’t want you to make fun of me.” 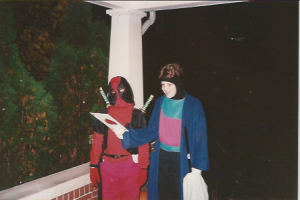 We became inseparable. We both got pull lists at a local comic shop (anyone remember Cardomics in Plymouth?). My mom would pick us both up from our respective schools on Wednesday and before we would head to Bible class we would swing by the comic shop and pick up our books. We’d play with our action figures afterwards, and on weekends we would spend the entire time at one or the others house. The first comic show I ever went to was with Chris. We went as Gambit and Deadpool for Halloween (seriously, who cosplays as Deadpool in 1993?

Only one kid. My best friend.) We read our comics together on the floor, we built Blackbird jets and Danger Rooms out of cardboard. My poor mother would spend her Saturdays driving us around to different toy stores trying to find new figures, I’d spend every Easter break at his parent’s cabin in Big Rapids and every time we went up there we’d pretend our X-Men/Marvel universe team had crash landed in The Savage Land! We got into music at the same time and would make soundtracks for our toy adventures, and when we were older we convinced a local theatre to show us X-Men a night early because Chris signed up for the Navy and was getting sent to boot camp the day it came out. So there we sat, our last night before our first long separation since we’d met. I’d just a month earlier lost my mother, and now I was about to lose my best friend. We sat in silence and watched the film, something we’d waited ten long years for. 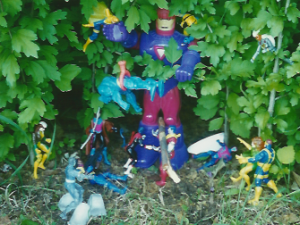 Things were never quite the same, after that. You get older, it’s part of life. Chris has been in the Navy ever since and away from home, I toured with a band for years, we got girlfriends, I got married. We’ve never lost contact, but it became more sporadic, no longer did we talk every day, now we were lucky if we talked a few times a month. He’d come home occasionally, and when he did everything would fall right back into place, like no time had passed at all. We’d talk comics, listen to music, go hunting for toys, watch Raiders. Eventually a few months would go by and he’d get called away. Sometimes I get pretty bummed when he’s not around, but then I realize that we both made a best friend all those years ago, one that’s never going away: comics. Every time I miss that kid, I’ve got bookshelves full of back issues that contain memories of all our adventures past. I can open any issue of Uncanny X-Men and remember where we were when we got it, what song was playing on the radio in the background when I read it. That’s the greatest thing about comics, they are a wonderful escape. We both needed that escape, from school, from other kids, from everyday life, we still do. When I’m having a bad day there is nothing in the world that can make me feel better than folding back the spine of a comic book and getting lost with the X-Men while the scour the Shi’ar galaxy. When I miss my best friend, it’s nice to know I can go home and visit him in characters and stories that remind me of him, all while knowing that somewhere, he’s escaping to that same world.

“Tune in next time for another installment of “My Golden Age” wherein our hero gets his first taste of freedom!”