As part of Avengers month (plus), leading up to the opening of the movie; The Avengers, this week I am looking at Thor # 377, from Marvel Comics.  It is cover dated November 1983 and features a really strange looking image of the title character, Thor!  Or does it?  Who is this strange looking creature wearing Thor’s costume, swinging Thor’s hammer and breaking Thor’s masthead?  The cover is drawn by Walt Simonson, who makes his debut as writer and artist on The Mighty Thor!  And what a debut it is!  Take a look at that striking cover! 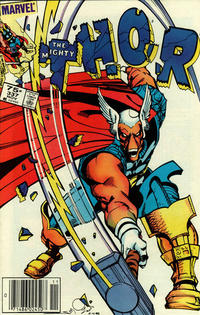 This issue is scripted, penciled and inked by Walt Simonson.  The story is simply entitled; “Doom!”.  The book opens with three pages of Surtur forging some sort of weapon, then abruptly shifts to Doctor Donald Blake walking through Grant park in Chicago.  He is deep in thought when he is “kidnapped” by two strong-arm types and tossed into a car!  Once inside he discovers that he has been grabbed by Nick Fury and S.H.I.E.L.D.  He is taken up to their Shield Helicarrier and shown an alien space ship on course for Earth’s Solar System!

Again the scene shifts, this time to Asgard, where we find the Lady Sif trying to cheer up Balder, the no longer Brave (?) who has recently returned from Hela’s Dark Domain!  There is also another interlude where the reader is introduced to the goddess, Lorelei and another subplot with her and Loki!

But the made story continues as Thor blasts into the space ship and confronts it’s occupant, a certain Beta Ray Bill.  They battle against each other, as Bill’s ship heads for Earth to deal with necessary repairs, due to Thor’s crashing into it.  Thor and Beta Ray Bill handle the worst that the other has to give, but as the ship nears the Earth, Odin’s “curse” hits Thor!  During the battle, Thor has lost his hammer and as the ship enters Earth’s atmosphere, he changes back into Dr. Blake and Beta Ray Bill easily overcomes him!

Landing safely on Earth, Beta Ray Bill is challenged by Nick Fury, in the Shield Helicarrier.  Beta Ray Bill searches for Thor’s powerful hammer to use, but only finds Dr. Blake’s cane.  In anger, he strikes the wall with the cane and is transformed into a version of the Mighty Thor!  What???

Yes, this alien creature, has struck the enchanted cane and been transformed into Thor!  He attacks Fury, but before he can do to much damage, Odin appears and summons Thor back to Asgard to deal with an urgent problem!  Beta Ray Bill disappears and Doctor Blake stumbles form the alien ship, only to discover that Odin has been there and has not taken him.  He is stranded on Earth, maybe forever, as Don Blake, with no way to transform into Thor and return to Asgard!!!

Quite a beginning for Mister Simonson on Thor, yes indeed!  I will confess that I have never been a huge Beta Ray Bill fan, but this story, and his introduction into the Marvel Universe is an outstanding issue and I must give it a full five (5) out of five (5) Legion Flight Rings.  You will want to have this comic in your collection, if you don’t already own it!  Nuff Said!