I WILL TELL YOU #61: My Moments With Cap

My Moments With Cap

My first moment with Captain America was a pretty inglorious one.

That was in 1973 or so, when I was 10, before I was into comics but was plenty into the Adam West Batman TV series that ran daily on weekday afternoons, right after school. What does that have anything to do with Cap, you want to know? Just hang on; you know doggone well I will tell you. 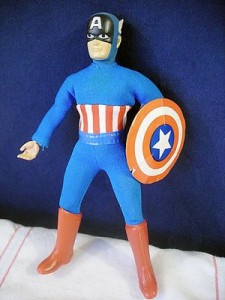 Around that time, my mother and I were at the local Toys R Us when I happened upon a selection of Mego action figures. I immediately spotted a Robin, so I excitedly sorted through the remaining selection of action figures looking for Batman. Which, unfortunately, I couldn’t find. My mother offered to buy the Robin figure for me, but I really had no interest in Robin without a Batman figure to accompany it, and told her as much. She looked through a couple of the figures and then directed my attention to, here we go, a Captain America action figure. That was, believe it or not, the first time I had ever seen or heard of the character. But with my sights now instantly but fruitlessly set upon a Batman action figure, I took little more than a passing glance at Cap, which held no interest for me whatsoever.

Of course, being not only a selfish kid, but also an instantly disappointed selfish kid, I took no appreciation of her offer and rolled my eyes when she dared to even hint pairing up Robin with some nobody character, which is all Captain America was to me after being introduced to him only seconds earlier. It was Batman or bust at that point, and so we walked out of the store empty handed. 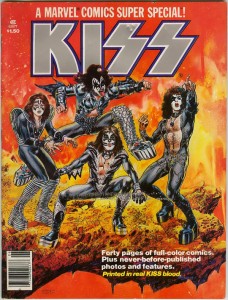 I managed to find that elusive Batman figure eventually, and life was good. But a few years later, after Batman and all of my other action figures had been relegated to a few boxes in the basement, my primary interest was still not yet comics, but something that eventually led me to discover comics. And that something was none other than the rock band KISS, who was at the height of their popularity in 1977 when Marvel published the first issue of the magazine-sized Marvel Comics Super Special, which as comic fans know featured a story that made the real-life KISS into comic book superheroes.

The reason this special got me into comics was because of the cameo by none other than The Avengers. Undoubtedly, I fell for exactly what Marvel was shamelessly trying to pull off: to get KISS fans who didn’t read other Marvel comics to start doing exactly that. And what grabbed me about The Avengers, even from this brief appearance, was that all of these characters that I had seen somewhere before in various places and media were all together, on one team; perhaps none of them individually had sparked my interest before, but collectively they most certainly did now. 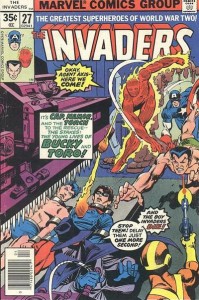 Cap also appeared in The Invaders, which initially confused this clueless teenager.

And one of those characters was, of course, Captain America. And now, all of a sudden, he seemed a lot cooler. And when I discovered my first issue of The Avengers, #168, I was instantly and forever hooked on Earth’s Mightiest Heroes, and the characters that comprised them, including Cap.

A couple of months after that, I noticed that Captain America was featured in another team comic, which of course was The Invaders, and upon picking up my first issue, issue #27, I discovered that it was set during World War II. It was a great comic but left me a little confused, as I hadn’t yet learned that Cap had been around since the 40s, so I wasn’t sure how or why it was he could be around in a story from the past. 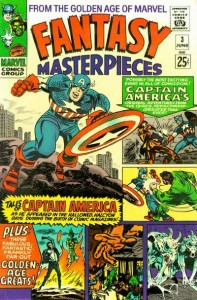 A few months after that, I discovered the existence of comic book shops, and the first one I ever set foot in was in Brooklyn, New York, of all places, after begging my dad to take me there during an Easter break trip we took to New York City. And it was there that I came across not only some seemingly-ancient issues of The Avengers (issue #’s in the 20s and 30s, circa 1965 / 1966) featuring Cap, but I also discovered several issues of Marvel’s Fantasy Masterpieces, many of which reprinted old Timely stories from the 1940s that I didn’t even know existed. And when I saw that some of these also featured Captain America, I suddenly understood how Cap could be featured in a story taking place during that era; because that was when I realized he really was around during that era. I was absolutely incredulous, and after finding these issues all I wanted to do was sit in the hotel room and read them over and over again. The Statue of Liberty and various museums suddenly didn’t seem like such a thrill to visit. 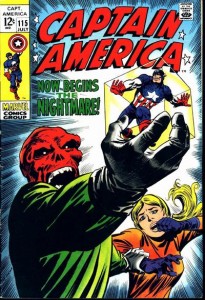 Captain America #115 (1969) made me lie awake at night imagining what I'd do with The Cosmic Cube.

And then that summer, I discovered another stash of “ancient” Marvels at a local used bookstore (Jerry’s Bookstore in downtown Farmington, Michigan, oldsters). Among them were several issues of Tales of Suspense featuring Cap and Iron Man, and several issues of Captain America, including #100 (which I knew was a big deal, but didn’t yet know it was the first issue of Cap’s own comic in 30 years), #110 and #111 (the first two of Steranko’s three issues that absolutely blew me away), and #115 (the first story I ever read featuring the Red Skull, and a comic that had me endlessly pondering just what I would do if I had the Cosmic Cube). You know how every kid has that one awesome summer they never forget? 1978 was mine. 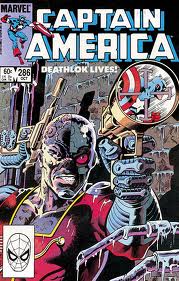 Captain America #286 (1983), featuring the return, finally, of Deathlok the Demolisher.

But, just last year, I probably had the greatest ever moment with Cap, when I actually got to meet him. Or, the closest thing possible to meeting Captain America, when I got to shake hands with the actor who played him in Captain America: The First Avenger and the upcoming Avengers movie, Chris Evans, just before attending the premiere of Cap at San Diego Comic-Con. Just when I thought I was old enough to be past having giddy fanboy moments, I had one of the coolest ones of my life. 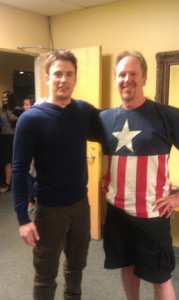 So despite that rather dismissive and mundane first moment at Toys R Us nearly forty years ago, Captain America has since become the centerpoint of some of my favorite moments in not just comics, but in my lifetime.

That is why out of all the Avengers, Captain America is not only the first, but also my favorite. Thanks, Cap. Sorry I didn’t buy your action figure.