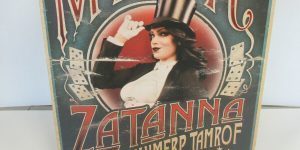 Welcome back to Consigned, Cool, & Collected, where we look at items with a particular cool factor that have been consigned into our fine establishment. Today, we’re talking about a gorgeous Sideshow Toys Premium Format Figure of the Justice League’s magical mainstay, Zatanna!

1938’s Action Comics #1 is the first appearance of a classic DC hero: Zatara the Magician! Dressed in a top hat and tails, John Zatara used a mixture of stage magic skills (like escapology) and sorcery to battle crime and injustice. Though overshadowed by the title’s headliner, Zatara kept his feature in Action Comics for twelve years. Along the way, his “magic words” evolved into the practice of speaking the intended effect backwards. !ti t’nsi ,daer ot draH

Fast forward to 14 years from Zatara’s final installment to Hawkman #4, which introduced a top hat and tails clad, backwards-speaking sorceress named Zatanna. Zatara’s daughter, she was on a search for her missing dad that would lead her through the pages of The Atom #19, Green Lantern #42, Detective Comics #355 (Elongated Man feature), and finally Justice League of America #51 in one of DC’s earliest crossover events. She would continue to be a fairly frequent guest hero around the DCU before ultimately joining the JLA in 1974’s #161, becoming one of the team’s mainstays for the rest of the original series’ run.

Her status as a Justice League mainstay, not to mention being the personal favorite of Batman: The Animated Series co-creator Paul Dini, has secured Zatanna a spot as one of DC’s fan-favorites. It is that status as one of DC’s long-running leading ladies that earned her this Premium Format Figure.

While about as poseable as a traditional collectible statue, the Premium Format figure boasts a few feature that sets it apart: Zatanna’s working clothes, worn on both on the stage and the battlefield, are rendered in actual cloth – including her iconic fishnets! Plus, its box is designed to resemble a poster for Zatanna’s magic act, making it a display piece in its own right.

It’s exciting to sell a piece that not only has great value but also sets a high bar for the quality of the design. What might you have lurking around in your basement or attic? Let us know!

We’ll see you back here in two week for even more pieces that are Consigned, Cool, & Collected!