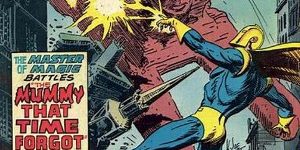 This week, we find ourselves in the D C Comics section of the comic book vault, found deep below my abode.  And I bring up the 1st Issue Special # 9 for us to shine a spotlight on.  It is cover dated December 1975, so it would have been on sale around the time of my birthday, in September of that year.  The book features the character, Dr. Fate and it has a decent cover by Joe Kubert.

I really don’t think it’s a great cover, just serviceable, a bit of a disappointment, if truth be known.  I think D C went with Kubert, as he might have had some history with Doctor Fate back in the Golden Age, but I am not sure.  With all that out of the way, take a look at the published cover and you be the judge: 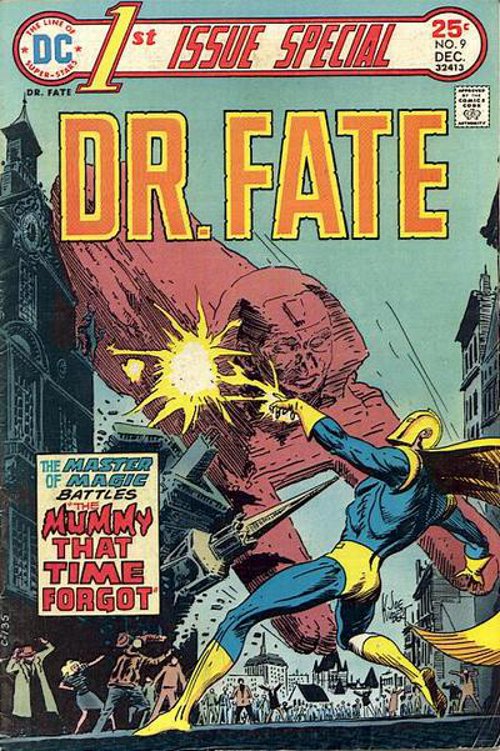 I really like the character, Dr. Fate, but this cover just doesn’t do it for me.  What about you?

The title of the story appears to be; “The Mummy That Time Forgot”, or at least that is what appears on the cover. Once we turn to the splash page inside, there appears to be no actual title to the story, or it is entitled, simply; “dr. fate”.  The story is written by Martin Pasko, the former letter hack, who long time D C editor, Julius Schwartz, used to call Pesky Pasko within the D C letter pages a number of years previously.

The interior artwork, both pencils and inks, are provided by Walt Simonson.  Simonson remembers this story as being one of the first full length comics he did for D C.  Pasko was also quite a new scribe, doing work for D C.

Here is a cover version done by Simonson, that was not used, as the D C brass went with the one done by the long time professional, Kubert.  Note the different helmet design that Walt drew.  I guess it was under consideration, but ultimately it was decided to go with the Golden Age full helmet. 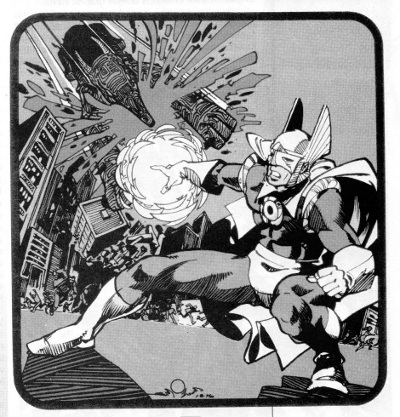 I like this cover a lot better than the one the D C brass decided on, though I’m not too sure about the helmet, and maybe this is why D C opted not to use it.  And if you look at that helmet closely, I think you just may find that Walt used it later in his career, when he was doing Thor over at Marvel Comics.

The story is well written and even better drawn, so it really is a classic book you ought to consider adding to your collection.  Basically, the story is that a long dead (or was he still alive) mummy, named Khalis wakes up from a four thousand year nap to pick up where he left off, trying to rule the Earth in the name of the Egyptian God of death, Anubis.

Just to tie the past to the present, Pasko has Khalis previously being defeated by Nabu, so it is “fate” that Khalis and Dr. Fate battle against each other so many years later.  Their fight is over who shall control the amulet of Nabu, which turns out to have been originally, the amulet of Anubis.  Oh, the wicked web that is woven!  But that;s all good, really!  Pasko also does a nice job with the characterization of Kent Nelson’s wife Inza.

As I said the art by Simonson is really, really good.  I love the fact that he incorporates the Egyptian Ankh in Dr. Fates’ visual magic use.  In fact, future D C artists continued this tradition in later stories using Dr. Fate.

In fact, I was so taken with Simonson’s art for this comic that I did my own interpretation of his Dr. Fate figure from the splash page.  So please indulge me, as I share my own drawing here in the post” 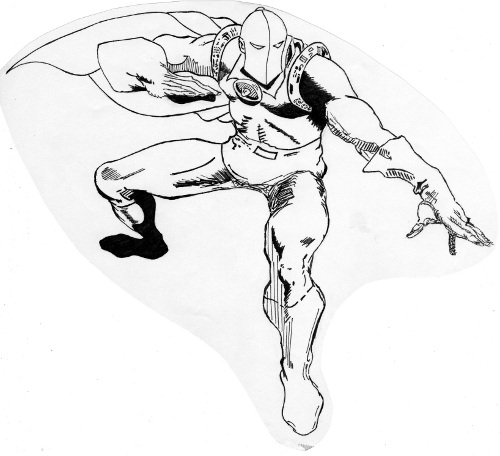 Anyway, if you haven’t guessed it by now, Dr. Fate defeats Khalis.  But the twist is that he is helped by Inza Nelson, but that’s all I’ll tell you here.

I think the story proved popular enough, and sold enough copies, to earn a back up strip in of all places, the Flash, but unfortunately it didn’t garner enough backing for a series itself.  And actually the D C implosion happened shortly after the Dr. Fate back stories up ran five or six issues and the D C brass pulled the plug on Dr. Fate.  I really think that this could have been a very good series if they would have allowed Pasko and Simonson to develop their story as a continuing series.  Oh well, it wasn’t to be.

One other interesting feature to the 1st Issue Special comics was the one page; “The story behind the story” that was run at the back of the comic.  This page gave the writer and artist a chance to share the story behind the comic.  In this on, Walt Simonson reveals his “greatest secret”.  And what was that secret?  Take a look at the scan below and he’ll tell you himself: 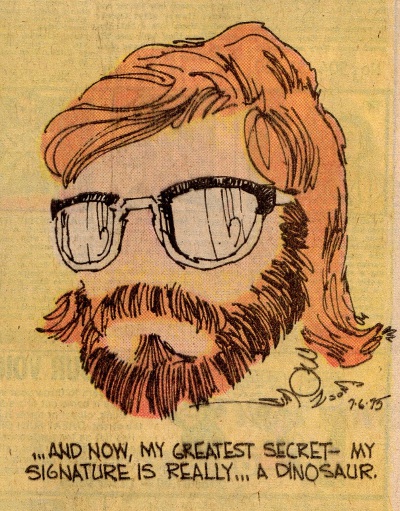