1 out of 5 – Would Recommend: Samurai Cop 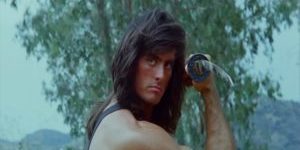 Welcome back to 1 out of 5 – Would Recommend, where the ideal Expendables line-up would be Matt Hannon, Y.K. Kim, Reb Brown, etc. Today, we’re explaining the first name on that list by watching 991’s Samurai Cop.

When the vicious Katana Gang invades L.A. and starts cutting a bloody swath through their rivals in the cocaine trade, the LAPD imports samurai/cop Joe Marshall (Matt Hannon) from San Diego to battle them steel on steel. 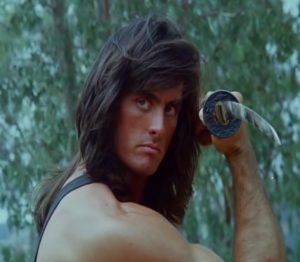 A white guy with long hair weilding a Katana, an image so 90’s you can taste it.

Persian filmmaker Amir Shervan. Per Wikipedia, he had quite the career in his native Iran until the overthrow of the Shah at the end of the 70’s. After the revolution, he moved to the California to keep his career going…and made this amazing direct to DVD piece of RiffTrax fodder in 1991.

I’m going to go ahead and chalk his American output up to being a foreign man in his fifties when he started his career, despite his attending school in Pasadena.

This flick is like Miami Connection crossed with Miami Vice by way of Strike Force Eagle 3. It has all the hallmarks of a great bad movie: weird cinematography, cheesy acting, bizarre situations and dialogue, gratuitous nudity, violence, flubbed lines that make it into the final cut…it absolutely deserves to be in the same conversation as Miami Connection, Space Mutiny, Birdemic: Shock & Terror, et al. Watch it!

Bonus: A fan-made sequel was released last year, with a good chunk of the original cast returning  to battle a new villain played by Tommy Wiseau. It’s reportedly not as good, most likely because its b-movieness will be deliberate whereas this one is accidental, but probably worth a look (I have not seen it yet) – Tommy Wiseau lacks the self awareness to be intentionally bad. 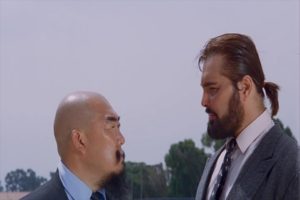 Pictured: Two Japanese men, according to this film.

NEXT WEEK: We’ll be watching the 2015 low point of Erik Estrada and Vivica A. Fox’s careers, Cool Cat Saves The Kids.