Welcome!  I’m glad you found your way back to my weekly RETRO REVIEW column, here at Back To The Past.tv.   This week I’ve pulled out Adventure Comics # 306, from D C Comics, cover dated March 1963.  It’s a book showcasing two separate series.  The cover featured; Superboy and the back up story featuring the Legion Of Super-Heroes!  Here’s a look at the cover: 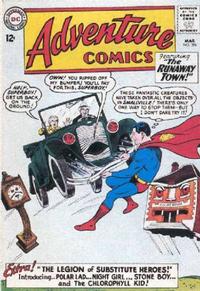 The first story features Superboy battling his foe; Mxyzptlk, in the twelve page story, entitled either “The Runaway Town”, as listed on the cover, or; “The 5th Dimensional High School”, as it’s listed on the splash page of the story itself!  It’s written by Otto Binder and both pencilled and inked by George Papp.  A mice little story, but not the one I want to talk about.

The second story is the one I want to being to your attention.  It’s entitled; “The Legion of Substitute Heroes!” and features the Legion of Super-Heroes, plus this other group with the same name as the story!  It’s written by Edmond Hamilton and is pencilled and inked by John Forte.  This fourteen page story is a real gem of a story and features a group of would be heroes who are just not quite good enough to join the actual Legion of Super-Heroes!

And who are this “not quite ready for prime time” heroes?  Let me tell you!  They are Polar Boy, Night Girl, Stone Boy, Fire Kid and Chlorophyll Kid.  They each had previously tried out for the Legion and was rejected by their fellow heroes.  In fact this story opens with Polar Boy trying out to join the Legion, only to be rejected!  As he leaves ,with his consolation prize of an anti-gravity flying-belt, he meets fellow rejected Night Girl, who introduces him to other the other rejected heroes.  Here’s a panel from page four of that story: 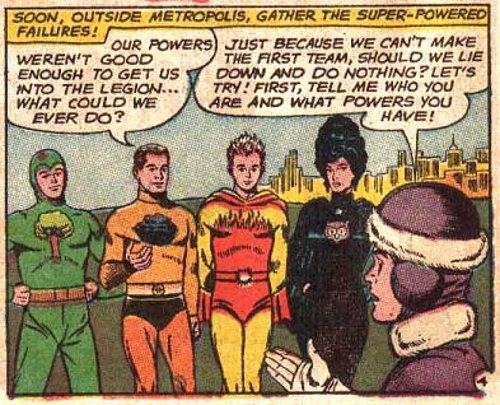 After each of the heroes share their powers and basically their origin stories, Polar Boy suggests that rather than going home as “hopeless failures” that they should form a club of their own and serve as the Legion’s “pinch-hitters”!  They all think this is a great idea and allows them to “regain their self-respect”!  They even come up with their own pledge:

Now they just await their chance to jump into the fray.  And they wait, and they wait, and they wait, as the Legion handles disaster after disaster, never giving the subs a chance to show their stuff!  By page nine, the Legion is called into space, to battle some “robot-ships” destroying everything in their path and heading towards Earth.  While the Legion is gone from the planet, an alien life-form attempts to invade the Earth by sending seeds which sprout and grow to be plant-men.  The subs defeat the plant-men and discover their origins.  A nearby planet, who had sent out the “robot-ships” as a diversion to the Legion of Super-Heroes, so they could conquer Earth while they were in space!

The Subs take to space (where they got the space ship remains a mystery) and take the fight to the plant-men’s planet, where they are victorious!  They return to Earth, only to find that the Legion is given a parade, for destroying the “robot-ships”, but no one is even aware that they prevented the actual invasion of Earth and defeated the plant-men!  The subs wonder if they should disband, but decide that there is a place for a team of substitute-heroes and that someday the world will know about them!

Quite a rousing and inspirational story for 1963, therefore I give it four (4) out of five (5) Legion Flight Rings!  Only the artwork keeps it from getting the full five (5) out of five (5) rating!  It’s stories like this one that makes comic books worth reading! 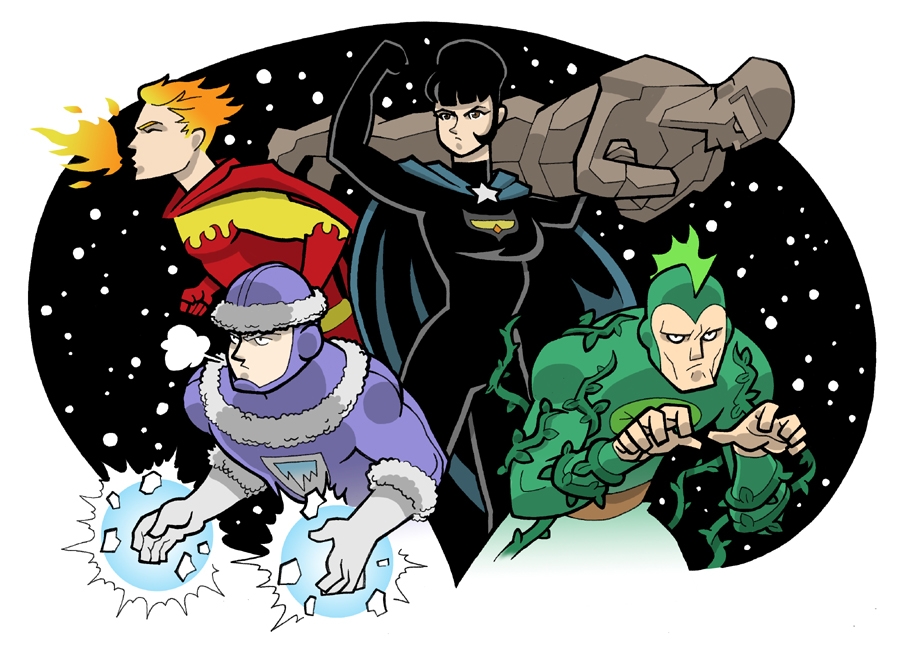 Legion of Substitute-Heroes by Joel Carroll