With reports nationwide of crazed individuals eating their own intestines, or other people’s faces, or even the family dog, many have fancifully proclaimed the onset of a pending zombie apocalypse.  In San Diego, California, there are indeed signs of such an apocalypse that not-so-coincidentally ties into next weekend’s Comic-Con International, but fortunately these signs aren’t nearly so ghastly. 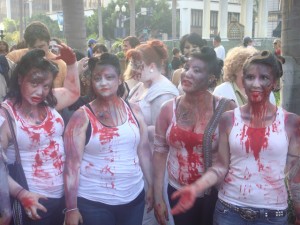 One such event is the annual Zombie Walk: San Diego, where the would-be undead can dress the part and put on their best rotting zombie faces before marching through San Diego’s Gaslamp District. There have been several such walks in the San Diego area over the past five years, but the biggest and best known have occurred annually during Comic-Con. This year’s Comic-Con walk takes place, much to the delight of the more superstitious crowd, on Friday, July 13 at 5:30PM, and for 300 lucky zombies and several other contest winners, the event will culminate with an invitation-only party at San Diego’s Voyeur club immediately after. This “Con of the Dead” party is sponsored by the cable horror channel FEARnet, who has partnered with Capcom and Dark Sky Films for this exclusive afterparty. While the party is by invitation only, the Zombie Walk itself is open to anyone wishing to participate, even those not attending Comic-Con. For more information, check out the Zombie Walk’s website at www.sdzombiewalk.com, as well as www.fearnet.com. 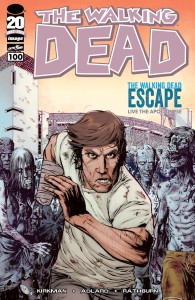 Closer to the convention itself, nearby Petco Park, normally home to MLB’s out-of-town San Diego Padres, will instead be home to not only another zombie hoard, but also those brave enough to try and escape them. The inaugural Walking Dead Escape: San Diego is an immersive event being put on July 12 – 14 by Walking Dead creator Robert Kirkman and his Skybound Entertainment publishing imprint, with three levels of participation available. Those who signed up early enough can participate as a walker, where they will actually be transformed into one of the seeming undead by makeup professionals at KNB EFX Group, the same company who provides the makeup effects for the AMC television series. Tickets for participation as a walker have already sold out. Still available, though, are tickets for the next level of participation: survivor, which allows those who sign up to navigate an obstacle course set up in the park’s concourse while evading the aforementioned walkers. Survivor tickets are $75. The first 10,000 Walkers and Survivors also receive an exclusive variant of The Walking Dead #100 from Image Comics. Those who wish to simply watch the chaos from the sidelines can purchase a Spectator ticket for $15. To purchase tickets or for more information, visit the event’s official website at www.thewalkingdeadescape.com. 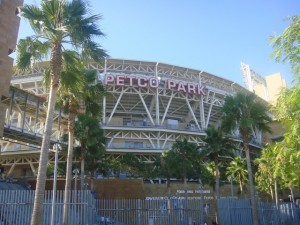 The usually tranquil Petco Park will feel much different during Comic-Con.

In conjunction with The Walking Dead Escape’s opening night at Petco Park on July 12, is a different form of zombie entertainment, with none other than metal and horror god Rob Zombie hosting VH1 Classic’s Dawn of the Con, a free party from 5:30 – 11:00 PM open to those attending Comic-Con. The party will include poster giveaways, the availability of custom-made tee-shirts, and a sneak peek at some of Zombie’s upcoming projects. More information can be found at http://robzombie.com/tag/dawn-of-the-con/ .

So there will be no shortage of zombies invading San Diego next weekend, but it’s comforting to know that these events will be far more fun and friendly than getting your face bit off or your insides devoured. Hope to see some of you there.