This week the RETRO REVIEW is back from vacation and looking at The Amazing Spider-Man # 50, from Marvel Comics, cover dated July 1967.  The story is written by Stan Lee, with the pencils by John Romita Sr., with inks provided by Mike Esposito, under the name of Mickey Dimeo.  It features a classic cover drawn by the aforementioned John Romita Sr.  I’m not sure if John inked the cover himself, or if Mike Esposito inked it, as it is not signed.  Take a look and you be the judge: 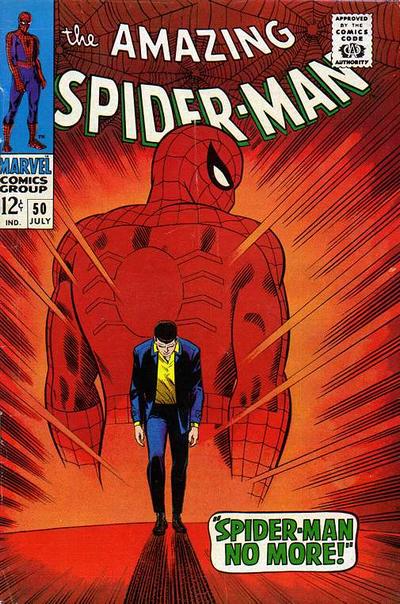 The story opens with Spider-Man battling a gang of four crooks, who were in the midst of robbing a payroll office.  Needless to say, Spidey makes short work of them.  One of the office workers is thankful, but the other feels that Spider-Man is a bad as the robbers he’s caught.  He goes so far as saying that Spider-Man is a menace, as the Daily Bugle says!

Spider-Man leaves, but is concerned that J. Jonah Jameson’s editorials have “done him more harm than all the crooks in town!”  Spidey returns home to his apartment, only to turn on the television to find Jameson on the news ranting about the menace of Spider-Man and offering a thousand dollar reward for the capture and conviction of the web-slinger!

Fearing for his aunt’s failing health and tired of being hounded by Jameson, Peter decides to give up being Spider-Man and just plans to concentrates on being a simple college student.  He even goes so far as leaving his costume in a trashcan in a alley!  An on page eight (8), we see the iconic image of Peter Parker walking away from his discarded “union suit”.  Here is that full page for your viewing pleasure: 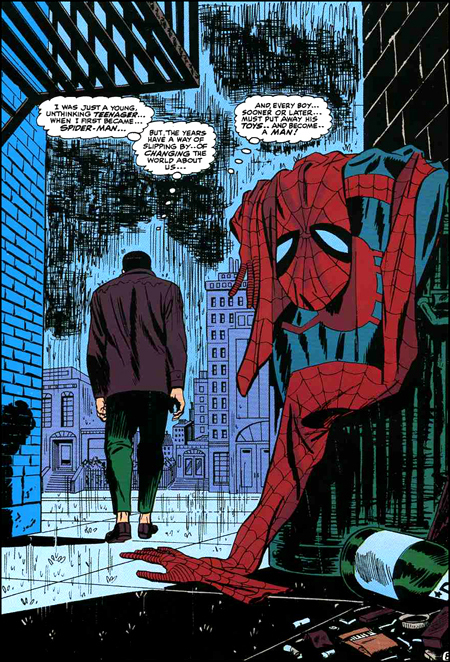 As luck would have it, a kid finds the discarded Spidey suit in the alley and brings it to the Daily Bugle, where Jonah grabs it from the kid and proudly puts it on display.  He even goes on the Tonight Show and shows it to Johnny Carson and Ed McMahon and their National Television audience!  Pete’s personal life starts looking up for a time, but crime increases in New York, as the Kingpin shows up and starts to gather the various mobs under his leadership.

Peter gets to spend some well deserved time with both Gwen Stacy and Mary Jane Watson.  In fact, he even finds the time to read a book and listen to some music.  But as he hears about more and more crimes being committed, he starts to feel guilty about the crime wave, and Peter remembers the lessons taught to him by his uncle’s death and decides to become Spider-Man once again after a two page origin recap.  And by the end of the story, Peter steals into the Daily Bugle and regains his costume before confronting Jameson and letting him know that Spider-Man is back in business!

Spider-Man would go onto to battle the Kingpin in Amazing Spider-Man #s 51 & 52, but that’s a review/story for another day and another column.  There may not be a lot of action in this issue, but it deserves it classic status, therefore I give it five (5) out of five (5) Spiderwebs!  And if you can’t afford the original, you can find this issue reprinted in Marvel Masterworks # 22 or the Marvel’s Essential Spider-Man # 3.