I WILL TELL YOU #63: Salvage Hawkman

I WILL TELL YOU #63:
Salvage Hawkman 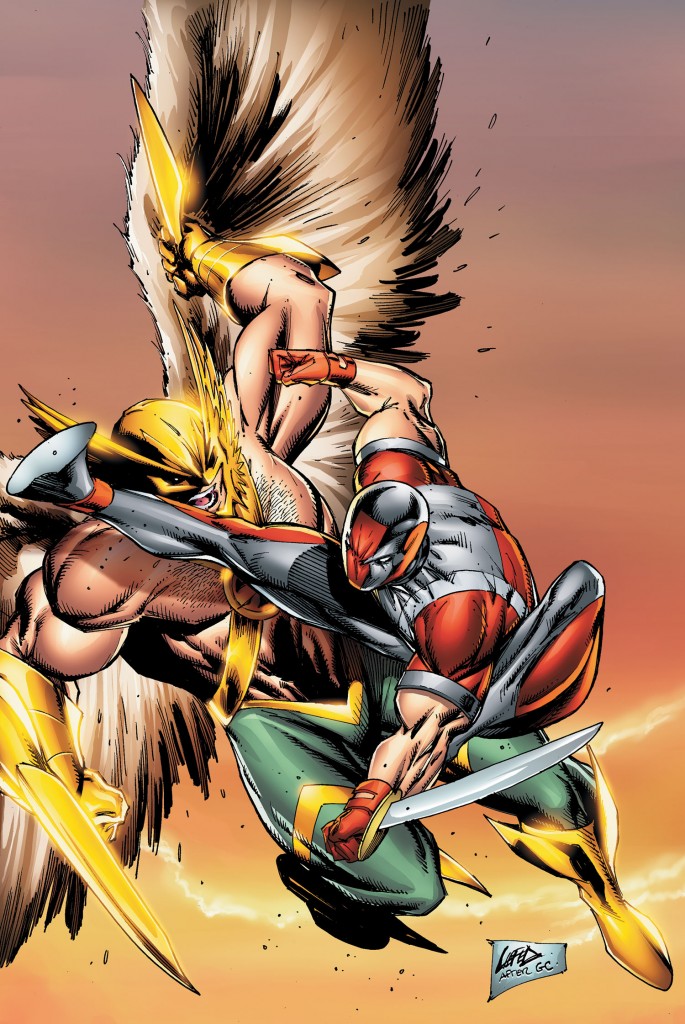 Savage Hawkman 12, after “GC”. Inspired by another cover that no one even knew was a classic.

I think it’s high time to give some credit to comic fandom’s favorite whipping boy, Rob Liefeld. Now, I won’t say this poor guy gets picked on, but he takes more crap than my living room carpet after my dogs got into my stash of Miralax. And I’d like to give him credit for boldly coming onboard and being the latest creator to try and save one of DC’s most historically mishandled characters, Hawkman. Or as the comic is now called, Savage Hawkman. And who better to make the Savage Hawkman into something really tame than Rob Liefeld? Who better to salvage Hawkman than the guy who made Hawk & Dove one of the most talked about titles of the New 52 relaunch? Hawk & Dove was an epic 8-issue miniseries that’s destined to sit proudly alongside other DC quarter bin classics such as, oh, Emperor Joker and Amazons Attack.

Just take a look his cover art for the upcoming Savage Hawkman #12. Now this; this is a true piece of excrement in comic art. Looks like Liefeld’s indulging in a little bit of fanboy fantasy by having Hawkman fight Deadpool. Now, before all of you fanboys get your underoos in a knot, I know that’s not Deadpool; that’s a character called Pike, who Jim Lee created for Wildstorm way back . . . by ripping off Deadpool. So with some help from the colorist, a little whacky anatomy here, a little crazy perspective there, bingo bango; Pike is looking as good as Liefeld’s Deadpool ever did.

And speaking of perspective, Pike sure is a little guy in that illustration. It looks like he’s shrunk, so I can’t wait to see how he starts exhibiting Ray Palmer’s powers. Or maybe Hawkman goes into the future and learns a thing or two from Colossal Boy. But lest you perverts think I’m going to go on and on about the size of Liefeld’s Pike, let it be known that I also can’t wait for the part of the story that explains how Pike’s right foot gets replaced with a trumpet or whatever that is attached to his ankle. Or what happened to that ice cream cone he was apparently holding in his right hand before he went into battle. And what’s his right leg attached to, anyway; his chest? 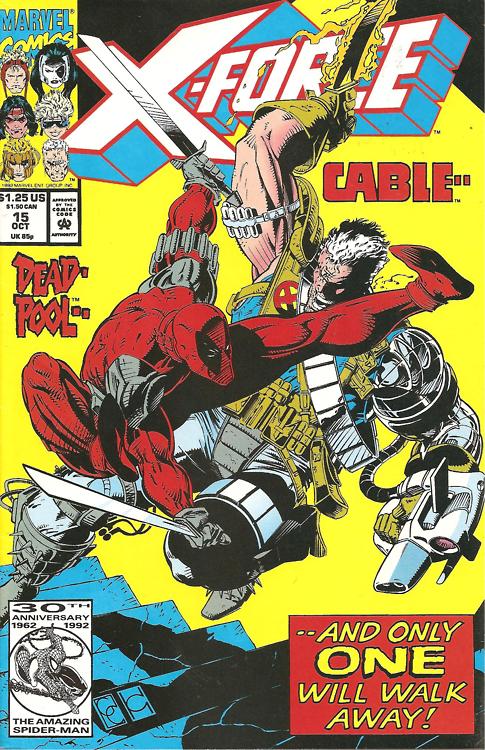 And, speaking of feet, Liefeld should rightfully be commended for taking on such a high-flying character, unabashedly accepting the challenge of actually having to draw a character’s feet, in an elevated environment where there are no boxes, shrubs, or furniture present to hide them.

Now, look at Liefeld’s signature at the bottom. Not sure what “after GC” means? After getting clobbered? After going crazy? After gaining command? After golf course? After garbage can? Maybe, on all counts. Or so I thought.

Time for a momentary fanboy flashback. Remember the cover to Amazing Fantasy #15 from 1962, with Spider-Man slinging through the sky with a terrified crook under his arm? Or course; we all do. It’s iconic. Or the cover to Crisis on Infinite Earths #7 from 1985, with a grieving Superman holding the body of Supergirl in his arms? Absolutely; it’s a classic.

Now, remember the cover to X-Force #15 from 1992, with, um . . . Cable fighting Deadpool? Me neither. Until recently, that is. While listening to a Shotgun Messiah CD and sipping a Crystal Pepsi, my memory from that era was suddenly triggered and that long-forgotten cover was instantly recollected. Pulling said comic from my collection; yeah, I have issues of X-Force in my collection; I examined the now very familiar looking cover and realized that it was drawn by . . . Greg Capullo.

Well, Liefeld did credit Capullo; maybe GC also means “giving credit”. And he was looking in a mirror when he copied that cover, so no one can fairly say his Hawkman cover is a flagrant rip-off. But come on, Rob; an obscure issue of X-Force? I guess that would be an iconic cover . . . to him. Regardless, kudos should be given to Liefeld for acknowledging the source of inspiration for this cover. Because for all the times he’s been accused of blatantly ripping someone off, this is probably one time he could have gotten away with it.

So I will tell you, Rob: good going, and thanks. You’ve already ensured that Hawkman is going to get a lot of attention.