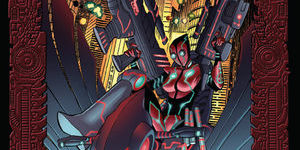 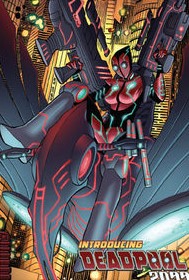 Welcome back to Strange Times & Places! We’re honoring this week’s release of Deadpool 2 with a look at the Merc with a Mouth’s foray into possible futures, Deadpool 2099.

Hmmm, the universe of 2099 (or universes, as the case may be) would probably fall under Royale with Cheese. It’s not that there are any massive changes as much as the march of history has continued unabated and left the present day far behind.

It’s a tale of two sisters: One is Warda Wilson, daughter of the original Deadpool and the succubus Queen Shiklah. Years ago, Wade sealed her mother away and Warda wants her back – she operates as Deadpool while keeping her father chained up in a secret location, torturing him for information. The other is Ellie Preston, Wade’s illegitimate daughter and adopted daughter of Emily Preston. Also calling herself Deadpool, she seeks to rescue her father and hopes to set her wayward sister on a more righteous path. 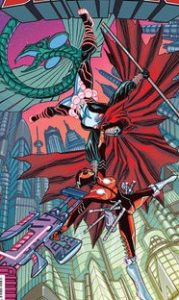 Deadpool Vs. Deadpool for the life of Deadpool 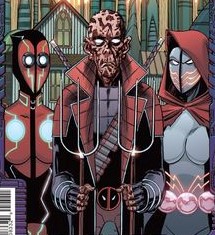