Boy Howdy!  It’s time for a new RETRO REVIEW and this week I’ve visited the independent section of the comic book vault and brought up Mage # 1, of if you prefer, Mage The Hero Discovered # 1, cover dated May, 1984 published by Comico.

Comico may have published this comic, but’s it’s the Matt Wagner show, all the way.  He is the writer, the penciller, the inker and even the colorist!  Talk about doing it all, he was responsible for everything but the lettering.

The cover was actually a wrap-around, but here is the front view only, then I’ll show the whole version right after, if you ask nicely, though it doesn’t really add much except an explanation of the series.  So I guess, that really does add value, doesn’t it?  Anyway, here they are: 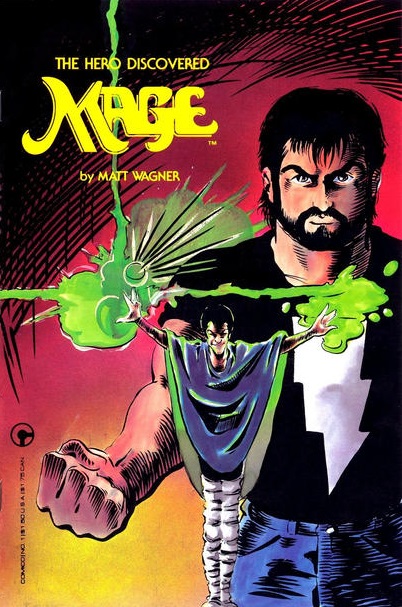 And as promised, the full wrap-around cover: 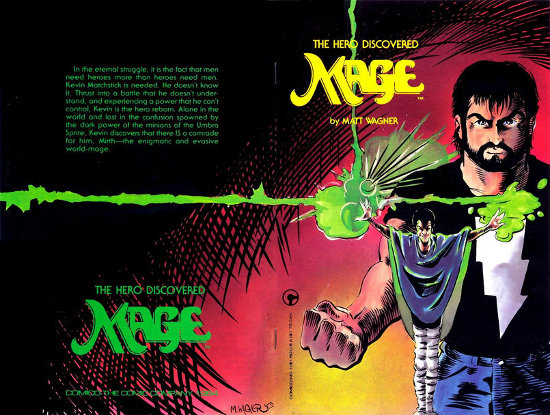 Wagner provides a forward on the first inside cover, discussing the Hero philosophy, as well as, his opinions, as well as, the fact that “heroism is relative, as the hero of one people is the arch-enemy of their rivals, and vice-versa”.

The comic book itself is chapter one (1) in a series that ran fifteen (15) issues, or if you prefer, chapters.  This first comic is chapter one and is entitled; “Outrageous Slings and Arrows”, and as I said earlier Matt Wagner provides the story, i.e. he’s the writer and the penciller and the inker and even the colorist.  Oh yeah, the above covers were also drawn, inked and colored by Wagner!

The book open with our “hero” Kevin Matchstick walking down a rather empty street singing to himself (a song called; Rebels Rule by the Stray Cats).  He bumps into a man sitting on the sidewalk.  The man asked why he’s so happy and Kevin asks the man, why so glum?  They get philosophical and Matchstick explains that his parents don’t care, his friends are idiots and any lovers he’s had have all betrayed him!

They both rise and the other states that Kevin’s life is no so very little and that he has much to learn, right before disappearing in a flash of green!  A confused Matchstick continues on and witnesses a mugging.  He rushes in to aide the unfortunate person and ends up fighting a bald-headed, white-faced man in a trenchcoat.  Their battle lasts a full eight (8) pages.

While fighting the man, it is revealed that the man has some sort of thorn on his elbow which he attempts to strike Kevin with.  Kevin manages to fight the man off and rushes to see what he can do for the mugging victim.  The victim right before he dies, manages to utter the word … grackleflint!

Matchstick does his civic duty and calls for the police and heads for his apartment.  Meanwhile, a mysterious man  receives a call.  His response; “He’s dead? Good.  What? Matchstick? Was the power with him?  Damn! Then he must have already encountered the World Mage.”  What?  Okay, I guess the guy on the sidewalk was this World Mage then, whatever that is!

Matchstick enters his apartment only to find this World Mage already there and waiting for him.  The man reveals that his name is Mirth and that he forgets that Kevin knows nothing of him, yet he knows so very much about Kevin!

Mirth reveals that Kevin has fought Emil Grackleflint, one of the strongest agents of the “greatest power of evil” that the world has seen in quite some time!  He goes on to explain that with Kevin’s power and his magic, they will be able to crush this menace!

The next morning Kevin has convinced himself that it was all a dream when he is attacked by three, count them, three, grackleflints on the subway!  To escape, Matchstick jumps from the moving subway car, into what looks to be another on-coming subway train!!!  This first issue ends right here, with the infamous words … To Be Continued!

A pretty exciting beginning to a fun series.  Wagner’s storytelling is pretty darn good and his art, is not to shabby for a new guy.  The series ran for fifteen issues and then was done, with the storyline wrapped upped nicely.

But Wagner returned for the second arc of this storyline in 1997, which ran through 1999.  There was a zero issue, then another fifteen (15) issues.  This series was entitled; Mage The Hero Defined.  And just last year Wagner has brought back his hero for his final arc.  There was also a zero issue and it will run for a planned fifteen (15) issues, like the other two series.

I for one, am happy to see Matt Wagner return to this character and tell the final story about his hero, Kevin Matchstick.  The first two series are available in collections, so you won’t have to search out the individual issues, but you’ll have to wait for the last series to be collected, as it is still being published in the individual issue format, as of now.

I definitely give this series one of my highest marks and am looking forward to the climax of Wagner’s Hero series this year!  Remember that magic is green!  I’ll be back next week with a new Fabulous Find and again in two weeks with another new RETRO REVIEW.  Til then, be seeing you …