1 out of 5 – Would Recommend: Avenging Force: The Scarab 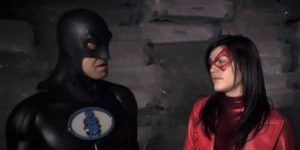 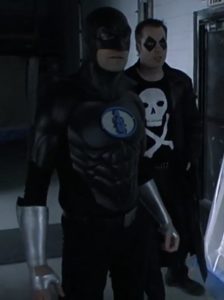 The Scarab and The Puni…Black Terror.

Welcome back to 1 out of 5 – Would Recommend, where I’m preempting your regularly scheduled blog post because I’ve found buried treasure I’ve hunted for since 2012: Avenging Force: The Scarab!

Canadian archaeologist Peter Ward is visited by his mentor, Professor Joab, who claims to have found evidence verifying his wacky alien-based theories about ancient Egypt. This draws Jack into a struggle between super-villain The Sphinx and N.E.D.O.R. agent The Woman in Red that will see him harness the ancient alien power of The Scarab to battle the forces of evil!

It will also lead NEDOR to put together The Avenging Force (Fighting Yank! The Scarab! Black Terror!  The Woman in Red! Doubledare!) in an afterthought animated sequence. 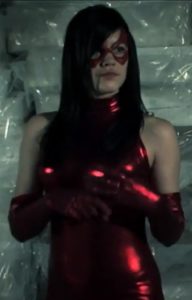 Brett Kelly, a Canadian indie filmmaker who boasts of having made more than fifteen features (though if they’re all at this level, there’s something to be said for quality over quantity). This is not his only super hero movie, incidentally.

He gets extra props for (if the credits are to be believed) reaching out to Roy Thomas for permission to call the Golden Age Daredevil by the name Doubledare in his one and only costumed scene. 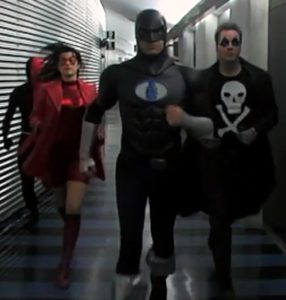 The field team of the Avenging Force! Or some cosplayers running late for a panel.

This movie is cheesy and no budget, on par with movies that the recently embattled Channel Awesome would put out for their anniversaries or the average scripted show on GVTV (look for yours truly in the credits of The Game Game Show episodes “Russian Zoo The Musical”, “Think-A-Thon”, and maybe a couple others). Therefore, I LOVED IT. It’s all heart, a bunch of nerds trying to make something cool. I will take this flick over Avengers Grimm any day of the week (and twice on Wednesdays), and it can be found on YouTube – all you need invest is time.

Come Back Next Week for a Deadpool-centric installment of Strange Times & Places!