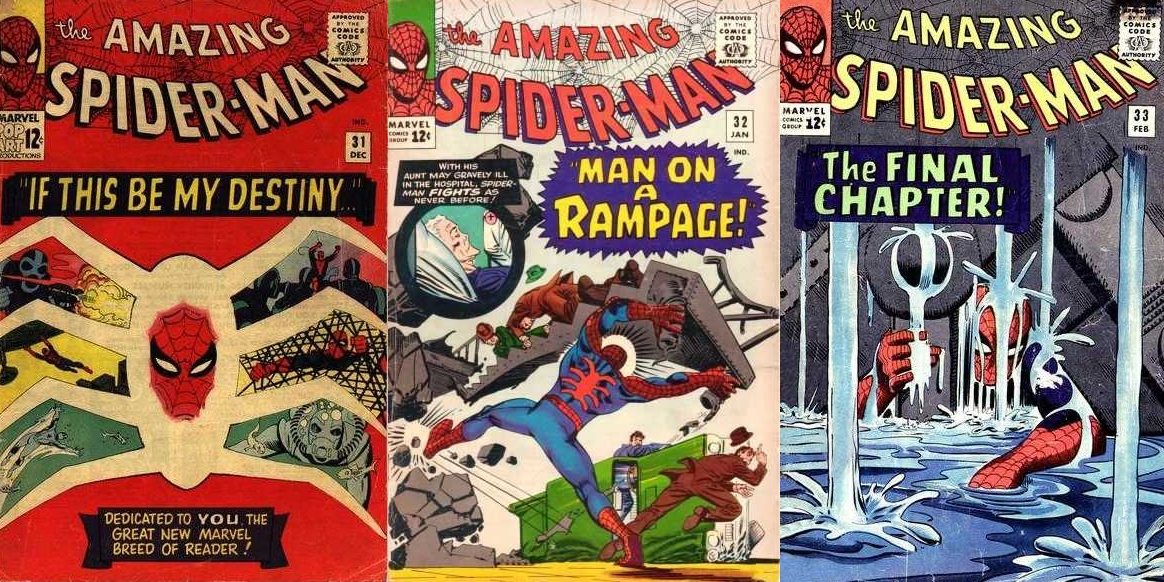 Okay, this time around I’ll be writing about one of my all time favorite comic book runs, and that is Spider-Man # 31 through 33, cover dated December 1965, January 1966 & February 1966.  The individual books are entitled; “If This Be My Destiny”, “Man On A Rampage” and “The Final Chapter”.  Plot, pencils and inks by Steve Ditko and the script is by Stan Lee.

Here’s a quick run down; A new villain, the Master Planner, appears and Peter’s Aunt May is in the hospital and her bills are beginning to mount up!  That’s all you need to know as the story begins in issue # 31, with Peter involved in his freshman orientation, on his very first day at Empire State University!  Peter then learns that his beloved Aunt May has suffered a heart attack and he must go to school during the day and take photos at night, to earn money to pay for his Aunt’s  hospital stay.

In issue # 32, the Master Planner is revealed to be Spidey’s foe, Doctor Octopus!  Peter reaches out to Dr. Curt Conners (his some time foe, the Lizard) for help and Doctor Conners suggests Peter try a new serum, Iso-36, but that it will be expensive and it loses it’s potency quickly.  Peter sells his most precious possessions to pay for the serum, only to have it stolen by the Master Planner!  Tracking the villain to his headquarters, Spider-Man fights his way into the inner sanctum and defeats Doc Ock, but in the process, he is pinned beneath tons of machinery and to make matters worse, the underwater sanctum begins to leak water ANd just to add salt to the wound, the Iso-36 serum is tantalizingly, just out of reach!

Issue # 33 opens with a simple human drama, Spider-Man trapped beneath the collapsed machinery, in a leaking underwater headquarters, with a life-saving serum quickly losing it’s potency, just out of reach.  And without the serum Peter’s Aunt May will die!

In an extraordinary five page opening sequence to this issue, Steve Ditko and Stan Lee provides the tableau upon which the readers learn that the spirit and courage of one man can truly make a difference!  Spider-Man is dwarfed by the machinery and tries repeatedly to lift it off of himself, only to succeed in moving it mere inches and then he collapses in exhaustion time and again.  With visions of his ailing Aunt before his eyes, Peter slowly shows his innate strength and prevails, as he slowly and agonizingly. lifts and throws the great weight off himself

The sequence is drawn perfectly, showing the reader Peter’s trials and his perseverance! And Stan writes perfectly, as well, having Peter say; “Anyone can win in a fight when the odds are easy!  It’s when the going’s tough, when there seems to be no chance, that’s when it counts!”  This was a perfect blend of words and pictures, which is an example of what makes the comic book such an important art form!

I give this classic three issue run a full five (5) out of five (5) Legion Flight Rings!