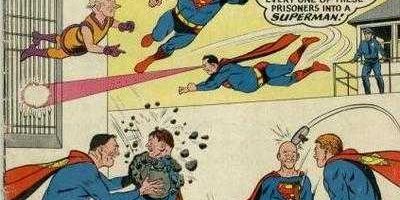 This time around, I’d like to write about issue # 148 of Superman, cover dated October 1961.  Why would I pick this issue, you ask?  Well, considering that next Thursday is April the 15th, and that’s the day that we all have to have our tax returns filed with Uncle Sam, it’s just appropriate, as one of the three stories in this issue is entitled; “Superman Owes A Billion Dollars!”  And who does he owe the billion dollars to?  Yep, you guessed it, the IRS!

The story begins with ‘rookie’ IRS Agent Rupert Brand (and with a name like that, he would HAVE to work for the IRS!

)as he makes an incredible discovery.  He discovers that Superman has never filed and paid taxes!  He determines that each year Superman captures countless criminals and collects a fortune in reward money!  Plus Supes has been known to dig up buried treasure and he also squeezes coal into diamonds, thus making more money!

Brand sets out to contact Superman.  And how does he do that?  By hurling himself off a building, that’s how!  Naturally Superman swoops in and saves him, where upon Brand launches into his speal about Superman’s tax requirements.  After flying the overzealous IRS Agent back to his office, Superman is informed that he owes the U. S. Government, one billion dollars in back taxes!  And he is only given until “noon tomorrow” to pay, or Brand will have the F.B.I. arrest Superman!

Superman spends the rest of the story frantically scrambling for extra cash, only to lose his instant riches each time through a series of goofy Silver Age plot twists, such as, Bizarro showing up and transforming a collection of priceless ivory into Ivory Soap!  At one point, Superman even hits up Aquaman to find him a giant clam containing an equally giant pearl.

Despite the setbacks, Superman manages to collect an impressive cache of rare treasures, only to see them devoured by a matter-eating space monster! (Only in the SIlver Age, eh?)  Gee, those pesky SIlver Age space monsters could strike at any moment, couldn’t they?  This leads to a rare display of temper from the normally mild mannered Superman, as the pressure to meet his tax deadline causes him to hurl the the space monster into outer space!  Luckily it was a space monster, and not just any old monster, otherwise, hurling it into space would have been a very bad thing to do!

Superman shows up at the IRS the next day without payment, only to find out that he’s ‘off the hook’ for the billion dollar tax bill, though the reasoning behind the clever last-minute reprieve is a bit of a stretch.  Supes is told by Rupert Brand’s supervisor that “according to law, every taxpayer is allowed to deduct $600.00 for each dependent, and Superman has over two billion dependents!  So if we deducted all his dependency allowances from his income, he’d have no taxable income left!”

Did you follow that reasoning?  Since every person on Earth is, presumably, Superman’s ‘dependent’, he can claim a $600.00 deduction for each of us!  Finally, Rupert Brand apologizes to Superman saying; “Gosh, I never thought of that!  Forgive me Superman, I should have known you couldn’t be a tax-evader!”  So all ends well for Superman, in this eight page story, written by Robert Bernstein and drawn by the great Superman artist, Curt Swan!

So, for all of you out there looking for a last minute idea, you might want to try the “Superman Tax Credit” and claim the entire world population as your dependents!  Why it’s so crazy, it just might work!  But I wouldn’t count on it!  In fact, take my word for it, it would NOT work!  I guarantee that it won’t!

But I’ll give the book three (3) out of five (5) Legion Flight Rings, just because it features the IRS and it’s Tax Season!  A fun book to add to your collection!