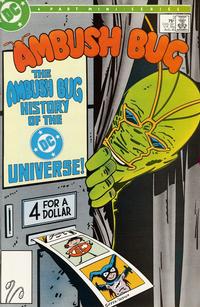 This week, I’m looking at D C Comic’s Ambush Bug # 3.  It’s cover dated August 1985, and sports a nifty cover drawn by Keith Giffen with inks by Bob Oksner. This is the third issue in the original four issue mini-series from 1985.  The book is billed as “The Ambush Bug History of the DC Universe!” and was plotted and pencilled by the afore-mentioned Keith Giffen, with words by Robert Loren Fleming, with inks supplied by Mr. Oksner.  The whole thing is edited by none other than Julie Schwartz!

It seems timely to review this particular book, as the history of DC Comics and all their characters are set to be re-imaged (don’t call it a reboot!) beginning in just over a month and the premise of this book has Ambush Bug looking at long-gone, dare I say lost, characters due to their recent Crisis on Infinite Earths which had tried to make sense of their multiple Earth mess they had painted themselves into.

Frankly, this reviewer loved the idea of multiple Earths on which characters from different ages could exist and occasionally interact with each other.  But apparently, it was just too complicated for some of their readers and DC decided to create an event in which to roll all the various characters together in “one world”!  Well, at least for a while!  But we know that didn’t last did it, dear reader?

But back to Ambush Bug # 3.  The book opens with the ol’ bug directly addressing his readers saying: “There are worlds within worlds and planets without number, a universe made up of billions upon billions of globes” (read worlds).  “But let’s  face it, this is ridiculous!  Earth-One, Earth-Two, Earth-Three, Earth-C… I mean give me a break already!  I have trouble finding the Seven-Eleven!”  He then jumps into the hidden history of lost DC characters, who were not addressed in the wake of Infinite Crisis!  Characters like Egg Fu, Wonder Tot, heck even Binky!  Some warranted only a half page biography, while others get a whole page.  Do you remember Super-Turtle?  How about Quisp, and not the Breakfast cereal either!

He covers the Super-Pets, even Green Lantern’s Itty!  A quick visit with Bat-Mite reveals him married to Star-Mite (think a mite version of Starfire!).  Ambush Bug gives us our monies worth, as he works in ads for Surprise Pops, with the Kryptonite Center and a free admission to Superman’s Fortress of Solitude where we can take a free ride to the Phantom Zone or another to Bizarro World!!  He provides a science lesson on why a man born under a red sun travelling to a yellow sun planet gains superhuman strength, etc.  We learn how to draw Ambush Bug, as well as, seeing other versions of Ambush Bug around the world.  Even versions of Ambush Bug if he was drawn by other artists, such as; Jack Kirby, Ernie Colan, Frank Miller, Steve Ditko and Gil Kane!  Good stuff at twice the price! And it only cost 75 cents back in 1985!  What a bargain!

Before the book is done we get Ambush Bug’s version of The Inferior Five (yay!), as well as, a visit to DC’s House of Mystery, plus a visit to Bizarro World itself, where we meed the bizarro Ambush Bug.  Now there’s a strange thing, I must say!  But the book ends on a sad note, as we witness Jonni DC being disintegrated by the despicable Darkseid, himself!  Quite a ride for six bits, I must say.

All in all I give this fun ride of a comic book, three out of five Legion Flight Rings!  If you love humor in your comics, and who doesn’t, this book certainly provides a large dose and ought to be in your collection!  Peace!