Yes, I know it’s a little early for the next column, but I’m brimming with excitement over being in San Diego and attending Comic-Con, and I simply can’t wait to share some of the major goings-on. So what are some of big things of this year’s Comic-Con? 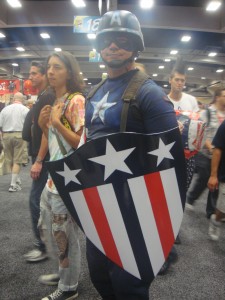 There were no shortages of fans dressed up as Cap, but this guy was one of the better ones.

It’s hard to believe that there was ever a time when San Diego Comic-Con had a day that could be called slow or quiet; before attendance rose to a level where ticket sales had to be capped, Preview Night on Wednesday and the show’s first full day on Thursday could be counted on as being less hectic and crowded for attendees.

Not so nowadays, when each day sells out well in advance, and the show’s opening days are now as packed and frenzied as its busiest ones. In fact, the addition of programming on Wednesday night now makes grant Preview Night the same significance as any other day of the con. Although, that meant little to those who had camped out in front of the convention center’s Hall H as early as Monday, a full two days early, awaiting high-profile programming events like the annual Twilight panel and other highly-anticipated panels. 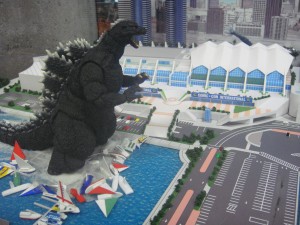 Not that this has anything to do with Cap, but it was a cool mockup on display at Comic-Con

One highly anticipated event wasn’t really part of the con, although it was of great interest to Comic-Con attendees. This was, of course, the release of Captain America: The First Avenger, which actually was released one day early in San Diego, on Thursday, but only at the multiplex nearest the con. Prior to the first public showing at noon, even, was a private 10:00AM screening that was held for press and winners of various local contests. Lead actor Chris Evans, in fact, appeared prior to the screening, giving fans a special treat. 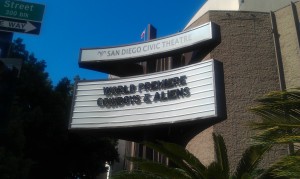 Another film generating quite a bit of excitement is the upcoming Cowboys & Aliens starring Harrison Ford and Daniel Craig, in large part because of director Jon Favreau’s decision to give the movie its world, red carpet premiere in San Diego, during Comic-Con on Saturday night. Favreau cited gratitude to his Comic-Con fans, who had shown great excitement for his past projects, and wanted to give some lucky fans the chance to see it. This film, in fact, is the very first to have such a premiere for Comic-Con, with Ford, Craig, Favreau expected to attend. Those fans, though, are subjected to having to run from one end of downtown to the other in search of faux-gold “bricks”, with selected ones containing tickets to the premiere. 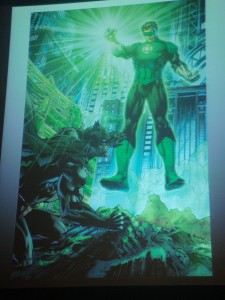 On the comics front, the big buzz is on DC’s upcoming relaunch, as witnessed by a series of four daily panels entitled DC Comics: The New 52, where DC’s architects discussed many different topics centering on the DCU’s massive overhaul. Friday’s session focused on the reasons for the relaunch, and was presided over by co-publishers Dan DiDio and Jim Lee, Editor-in-chief Bob Harras, and editor Eddie Berganza. The panel offered a very candid and refreshing admitting of past mistakes. Lee stated that DC’s storylines had lost their epic sense of wonder, while DiDio said that fans were suffering from “bad event fatigue”. Lee added that the Superman character had become stagnant, and acknowledged that their $2.99 Drawing the Line campaign had not succeeded in bringing sagging sales back up.

DC did preview some new art from Geoff Johns and Lee’s upcoming Justice League of America #1, which as of yet is unlettered by Lee gave a detailed and insightful description of the sequence and what went into its creation.

Saturday, traditionally the most popular days with the most highly sought-after panels and other events such as the masquerade, has yet to occur as of this writing, but look for updates here.

Category: Comic BooksBy Jim JohnsonJuly 23, 2011Leave a comment
Tags: I Will Tell You