Saturday was, as expected, a very crowded but exciting day to attended Comic-Con, but it was not without its frustrations. What kind of possible frustrations could there be with a mere 140,000+ people in attendance, you ask?

Why, I will tell you. However! 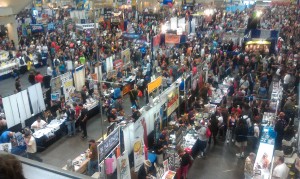 Artists' Alley isn't always packed, but the rest of the hall sure is.

First, credit must be given where it is due. Comic-Con has long been criticized for its large crowds, the associated long lines associated with them, and often the Comic-Con staff’s handling of it all. But in truth, the staff does a superb job of managing such an intense event, with plenty of volunteers directing traffic flow, keeping aisles clear, and directing attendees where to get in line. Signs are posted to assist with this, hallways in the upstairs panel area are designated one-way routes so that panel rooms can be filled and emptied more efficiently, and their staff keeps gawkers at popular booths, such as the G4 network, moving along so that the aisles are not gridlocked. Where snafus develop, they are often quickly resolved, and experience shows that any knowledge learned in any given situation is applied in future years.

One such snafu occurred at the fulfillment area, a designated area at the Marriott next door to the convention center where fans can pick up exclusive con merchandise that was either pre-ordered or purchased at the con. The idea to move the fulfillment area offsite was a smart one, as it freed the convention floor from that many more fans congregating around certain booths to pick up their goods. However, some attendees who made the trek to the nearby hotel, and following signs directing them to the fulfillment center, arrived there only to find that the line had been capped for the day, although arrival was during the designated pickup times. The frustration was largely due to the long walk and time wasted, when one well-placed sign at the front of the hotel would have alleviated a large part of this.

Popular panels were also difficult to get into, such as the traditional Marvel Cup o’Joe panel featuring Marvel chief creative officer Joe Quesada. Despite arriving 45 minutes in advance, fans in line for this panel remained stuck there, still awaiting entry long after the panel had started. This is largely due to fans who arrive early for a later panel, sitting through the earlier ones as mere placeholders for seats while legitimate fans of these early panels wait. This has been one of the rare persistent problems at Comic-Con, one that probably requires some better scheduling of panels, by perhaps scheduling the traditionally popular panels early in the day, or by grouping similarly-themed panels in the same room. Are you seeing this, Comic-Con? 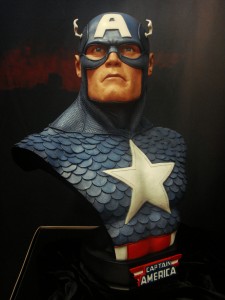 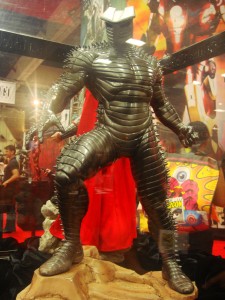 OK, enough griping. One of the most enjoyable aspects of Comic-Con is simply walking through the exhibit hall and checking out some of the very cool displays. Figure and statue manufacturers such as Sideshow Collectibles and Gentle Giant always have very cool displays that have made many a fan drool uncontrollably and possibly empty their bank accounts very quickly. Many who enter these booths walk away very poor but very happy.

Another fun part is just walking through most any part of the convention center, or any of the nearby hotels, streets, and restaurants, just to check out all of the various costumes that fans come decked out in, especially on Saturday, as the traditional Comic-Con Masquerade is held that evening. Words cannot always describe, therefore, I will show you. A sampling, anyway. 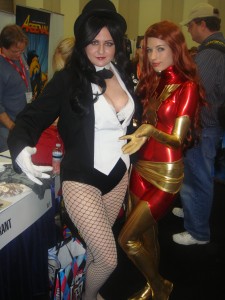 Zatanna and Dark Phoenix roam the aisles of Comic-Con. 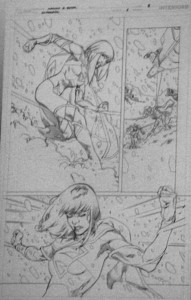 A page from the upcoming Supergirl relaunch, in a grainy pic sneakily shot during the panel.

On Sunday, DC Comics held the last of their four DC Comics: The New 52 panels, where several of the new and upcoming relaunch titles were discussed; among the panelists were DC co-publisher Dan DiDio, Flash co-writers Francis Manupul and Francisco Francavella, Supergirl writer Mike Johnson, and Batgirl and Firestorm writer Gail Simone. Also previewed was some of the art for the upcoming first issues, where again, showing works much better than telling. Although, a memorable DiDio quote was paraphrased by a fan asking a question; the quote was something to the effect of: “The old DCU was like waking up one morning and finally realizing you’re thirty pounds overweight.”

There is so much more to Comic-Con than a couple of reports and a few pictures will allow, but hopefully this taste was still enjoyable. Comic-Con was awesome, it always is, and anyone who’s serious about attending should make every effort to do so.

Category: Comic BooksBy Jim JohnsonJuly 26, 2011Leave a comment
Tags: I Will Tell You