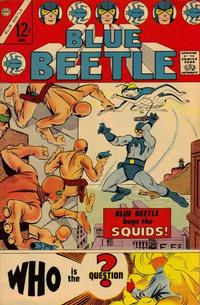 This week Retro Review looks at Charlton Comic’s Blue Beetle # 1, cover dated June 1967.  It features the “new” Blue Beetle, as written and drawn by Steve Ditko, who had recently parted ways with Marvel Comics in a dispute with Stan Lee!  The cover itself features the new hero, as well as, another new hero, The Question, and is drawn by the aforementioned Mr. Ditko!  The “new” Blue Beetle had actually made his debut eight months earlier, as a back up feature in Charltan’s comic book, Captain Atom #s 83 – 86, November 1966 through June 1967.  Then he gained his own book and the start of this new series.

Ted Kord, the “man behind the mask” had taken over the identity of the Blue Beetle from the previous Blue Beetle, Dan Garret, but that’s a story for another day!  This first issue’s story is entitled; “The Blue Beetle Bugs The Squids” and is said to be written by D.C. Glanzman, but it has later been revealed that Glanzman only lent his name to the story and that actually Steve Ditko was the writer, as well as, penciller and inker.  This was revealed in the fanzine, Comic Book Artist # 9, by none other than, Dick Giordano, who was the editor of these comics at the time!

The story opens with the Beetle interrupting a robbery by a gang of thieves going by the name of the Squids.  He battles against the many gang members and they all flee at the entrance of the police, including the Blue Beetle!  Beetle goes back to his secret headquarters through an underwater river entrance and regains his identity as scientist Ted Kord.  There he is questioned by the police about his possible involvement in the disappearance of the Dan Garret on Pago Island.  Hi lab assistance and love interest, Tracey, wants him to open up to her, but Ted chooses not to as, “two Blue Beetles is one secret of Pago Island … The other secret is so dangerous, it threatens the world!”

The Squids plan another robbery, this time of a party on a ship in the harbor.  The Beetle arrives to stop them after a seven page battle, but the Beetle comes out on top and then wonders what his next adventure will be.  Thus ends the Beetle’s first full length adventure.  He’ll only have four more under the Charltan banner, as this comic book series only lasted through issue # 5.

In the back-up story this issue, the readers are introduced to The Question, in an unnamed story.  We are introduced to Vic Sage, a hard hitting TV newscaster, to his love interest, Nora Lace, who works on the news staff, as well as a large number of other characters involved with World-Wide Broadcasting, or W.W.B., including the President and founder, Sam Starr and his son, Syd and his daughter, Celia.

Vic’s ideas and reporting style is rubbing some people the wrong way and Syd pleads with his dad to get rid of Sage.  Sage follows up a lead, but as the Question!  Ditko shows us  Sage donning a faceless mask and releasing a gas that cements the mask in place, as well as, changes the color of his hair and clothing.  He confronts a group of men working for Dicer.  They give up their boss and the Question tracks him down.  He overhears a conversation that indicates another crook is involved and follows Dicer to the meet-up.

The Question calls up the police and tells them of the meeting and they catch the two men in the act!  And it’s revealed that the second crook is Jim Lark of W.W.B.  This ends the first outing of The Question!

This is a good, but not great comic.  I like Ditko’s Blue Beetle, as he plays him rather light hearthearted and the first Question strip offers promise, therefore I give this comic three (3) out of five (5) Legion Flight Rings!  And as a bonus, here’s the first three cover appearances of the Blue Beetle on Captain Atom #s 83 through 85.  Enjoy! 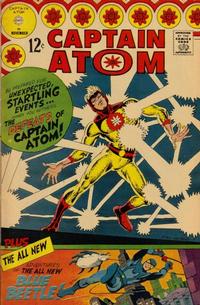 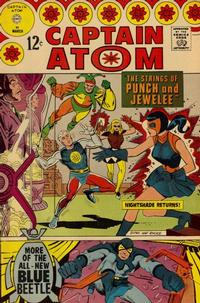 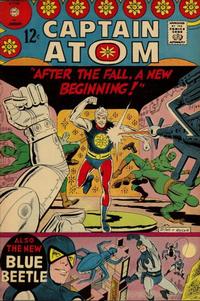