I WILL TELL YOU #36: San Diego non-Comic-Con Outtakes

“Now back home to find my bed. I gotta cool buzz chillin’ inside my head.
But just before the sun breaks through, I choke a little laugh and think about
The trouble that we get into.”
Get ‘Em Outta Here, from San Diego’s own Sprung Monkey’s Mr. Funny Face, © 1998. Lyrics by Steve Summers

The parcel of land now known as San Diego was once home to a native population known as the Kumeyaay and was eventually discovered and claimed by Spain in 1542. In 1769, the area’s first European settlement was officially established. The area was claimed by Mexico in 1821 shortly after declaring itself an independent nation, and in turn became part of the United States after the Mexican American war in 1850 and officially became a city once the state of California was declared part of the union. In 1969, exactly 200 years after the area has been officially settled, Detroit native Shel Dorf moved to San Diego and declared it to be the once and future home of comic and pop culture fandom.

That last part doesn’t appear in any history books, but is probably the only part of San Diego’s history that’s relevant to comic fans. Similarly, while Comic-Con is the reason that many such fans are drawn to the city each year, there is much more to see and do in San Diego than just Comic-Con, which is why I make it a point to travel out there a couple of days early each year in order to experience the rich historical, cultural, and social scene that the city proudly offers year round but gets missed, ignored, or crowded out by Comic-Con. Since there is so much to offer, and since my own experiences are still fresh on my mind, and since said mind is still too weary to think of anything else to write about, I’m going to share my own, NON Comic-Con experiences during my week away. What kind of experiences, you ask?

I will tell you. This is the equivalent of Slides From My Vacation, so you’d better turn away now. 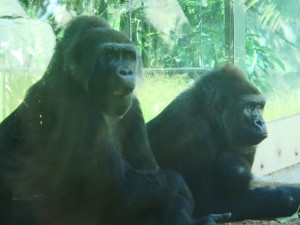 Think about Rise of the Planet of the Apes. Now, don't these two look like they're planning something really revolutionary? 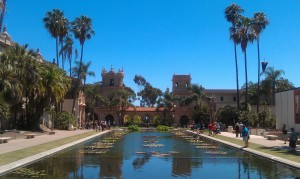 When Comic-Con gets too crazy, I close my eyes and think of this. Even if I'm walking through a crowded aisle.

One of San Diego’s biggest tourist destinations, if not the biggest, is the world-famous San Diego Zoo, which unknown to many is actually part of the much larger Balboa Park, a historic landmark which also houses a number of other attractions such museums, gardens, and nature trails. The area is absolutely one of the most beautiful I have ever visited, but it’s all WAY too much to see in a single day, but I did the best I could before my feet and legs gave up in protest. I had to pace myself, after all; there was still 4 ½ days of con-going coming up. 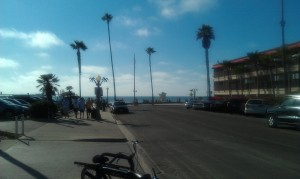 Behind you, shops and restaurants, but in front, ocean. I can smell that mahi grilling now . . . 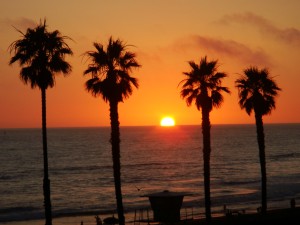 Not Ocean Beach, actually, but Oceanside, about 45 minutes up the coast.

Ocean Beach is a small, quiet community just a few miles northwest of downtown San Diego. Its main drag is full of not just open, airy restaurants and bars that satiate the appetites of both the hungry and thirsty after a day of beachgoing, but also small shops selling beach apparel, antiques, used CDs and LPs, and other knick-knacks. The smell of great food, the ocean spray, and a hint of incense makes it for an experience like no other. Its calming, tranquil atmosphere is the yin to Comic-Con’s intense and deafening yang. And like any other Cali beach, there are all kinds of attractive, um, wildlife always passing by. Sigh. 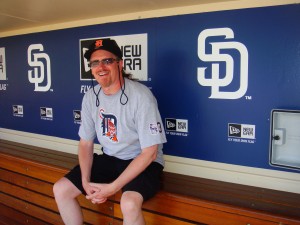 Now, just how many comic fans wearing a Detroit Tigers shirt ever get to sit in the Padres dugout? 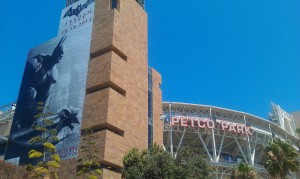 An ad for the Arkham Asylum videogame plastered on the front of Petco Park.

Lastly, as a comic fan who’s also a baseball fan, I opted to take a tour of nearby fairly-new Petco Park, home of the San Diego Padres and located across the street from the eastern edge of the convention center. And since I was only one of three taking the tour in this particular timeslot, mere hours before Preview Night at the con, I have to think that there really AREN’T many comic fans who are sports fans. Maybe that’s why the Padres are nowhere to be found during Comic-Con. Truthfully, though, according to Don the Tour Guide, Major League Baseball makes a deliberate effort to schedule the Padres for road games during Comic-Con, as requested by the city to avoid another 40K+ coming downtown for each game in addition to the 140K+ already there.

Of course, packing so much fun stuff into a trip like this makes for one exhausting vacation, but hey; I slept on the flight home. You know, I should really plan all of this cool and relaxing stuff AFTER Comic-Con, but then, I probably would never come back. Makes me wonder if Shel Dorf really planned on moving out there, or if the city just grabbed him and he forgot to come back . . .

Category: Comic BooksBy Jim JohnsonAugust 2, 2011Leave a comment
Tags: I Will Tell You