The wait is over, Marvel Comics’ The Avengers has finally made it to the theaters today, May 3, 2012!  And to go along with our month long celebration  of all thing Avengers, I present this week’s RETRO REVIEW on Avengers # 170 & 171.  These comics were cover dated April 1978 and May 1978.  Number 170 features a cover by George Perez and Terry Austin, bringing back Jocasta, the Bride of Ultron.  The cover to number 171 is also done by the team of Perez and Austin and features the Scarlet Witch. 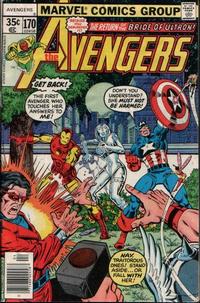 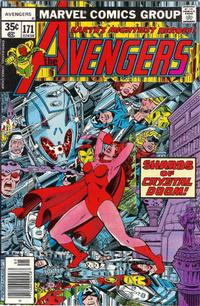 Both of these issues are part of an overall story arc in the “Korvac Saga”, which ran in issues 159, 167, 168 and 170 through 177, which was written by Shooter and drawn by Perez.  But these two issues tell a stand alone Ultron story.

Issue 170 opens with Captain America in the Avengers gym, working out.  He is interrupted by the Beast and the Avengers current leader, Iron Man.  And it appears that Cap has some problems with Tony’s leadership!

Shooter then focuses on other Avengers, Vision, Scarlet Witch, Wonder Man, as well as, Yellowjacket and the Wasp.  Hawkeye even checks in via phone, from the West Coast.  Which all leads to the Avengers getting a delivery!  It seems that Janet has decided she no longer wants Jocasta under her and Hank’s roof for another second!

But of course nothing is quite that simple and Jocasta awakens and breaks free upon delivery!  She immediately sets about following Ultron’s programming and begins to shut down the Avenger’s defenses!  A six page battle takes place with Jocasta fending off most of the Avengers, but just when they are about to overwhelm her, Iron Man and Captain America prevent them from doing so!  Cap even prevents Thor (a late arrival) from taking Jocasta down with his Uru hammer!  And therefore Jocasta strides away to freedom!  Though this shocker is explained in the last panel by Iron Man who tells them all that he is tracking Jocasta so that she can lead them right to Ultron!

Issue 171 opens with the Avengers in hot pursuit of Jocasta, where Ms. Marvel joins up in the chase with our heroes!  The Avengers track Jocasta to a convent!  As the Beast says; “talk about the last place you’d look!”  The Avengers enter the convent and the Scarlet Witch suspects that they are being watched!  It’s at this moment that Ultron teleports Wanda away from the rest of the Avengers!  Ultron then attacks the remaining Avengers, and Ms. Marvel goes in search for Wanda, suspecting that she may hold the key to defeating Ultron!

While the Avengers battle Ultron, we find that Wanda has been transported to an ever changing room of mirrors, that keep her constantly off-balance and unable to use her powers.  Ultron eventually traps the main Avenger team in a small force sphere, where they can not use their powers to escape, and leaves them to return to his bride!  As Ultron was made by Hank Pym, he has used a residual imprint of Janet to create Jocasta!  And because of this Jocasta, though she has been programmed to love Ultron, knows he is evil and must be destroyed!  Wow, talk about a soap opera!

Ms. Marvel finds and rescues the Scarlet Witch and they re-engage Ultron and Jocasta at this moment.  Wanda throws a hex, disrupting Ultron circuits and causing a rift in his armor.  Thor then is able to use his hammer to drive Ultron into space where he “dissipates in a billowing fireball.”  It looks like another happy ending, until the Avengers notice that Captain America has vanished during the battle, along with Jocasta!

So things are set up to make us want to pick up the next exciting issue of the Avengers.  Wow, this was a great time to be an Avengers reader and a great continuing story line!  I give it a full five (5) out of five (5) Legion Flight Rings!  Jim Shooter was at the top of his game and George Perez art is always wonderful.  If you don’t own the original comics, the Korvac Saga is available in a trade paperback and I highly recommend that you pick it up!