And now, for something completely different, yet the same.  Welcome to another Friday RETRO REVIEW, as always, brought to you by Greg Turner.  This week I’m looking at the two issue run of Crimson Plague, created, written and drawn by the fabulous George Perez and published by Image Comics.  These comics show a cover date of June 2000 for issue number one and August 2000 for issue number two.  And here’s what those two covers look like: 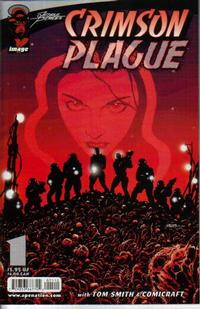 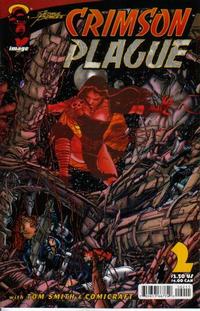 One interesting fact, it that the Image Comics issue number one was actually a reprint of Crimson Plague number one that was published by Event Comics in June 1997.  Well, technically it was a reprint, plus sixteen additional new pages, so that there was a reason for comic buyers to pick up this issue (again)!

Being a huge George Perez fan, I not only bought the Event Crimson Plague number one, but also the Image number one, three years later.  Heck, with the time lapse and the additional new pages, it was like reading a new comic!

The comic itself, is a bit confusing, it’s about a woman named DiNA Simmons, aka, Crimson Plague, who apparently has blood, that when exposed to air, kills!  In fact she’s been know to say; “I Bleed … You Die!”  It is also about another woman, Shannon Lower, who is some sort of commandeer, or pilot, of some sort of a spacecraft.

The book opens with DiNA being accosted on Manna Works 2, on Mars.  Needless to say, she gets into a fight, is stabbed and then uses her blood to kill all of her attackers, except for one , which she allows to go free, for some unknown reason, but then kills him fourteen pages later with no explanation!  Did she just happen to stumble upon him?  Was she hunting him?

The scene keeps jumping back and forth between DiNA and Shannon throughout the comic and it is Shannon and her crew that are tasked to go to Mars and Manna Works # 3, yes, 3 not 2, where the story began, to find out what is happening.  Pretty straight forward science fiction, but then Perez switches gears and gives us a history of a “super-hero” group called the Terran Alliance of Gladiators, or Taggers.  He spends page after page giving the rise and fall of this group and it’s fifteen members.  And also of the founder (?), a mysterious man (being) called simply, The Gladiator!  But back to our main characters.  DiNA is found, apparently the only survivor and rescued and brought back to civilization, or at least another another Manna Works, this time number 2.

Hey, I told you it was confusing.  In issue number two, it is revealed that apparently DiNA has no memory and is “childlike” and “simple” and the doctors/scientists are working with her to find out what happened on Manna Works # 3, but she has given them the slip and that’s where issue one began somehow.  In the meantime, we discover that Shannon Lower has also survived and may be set to be brought to trial for the deaths of all her crew members (?)  There is another jump to a section featuring “Lovely Rita Meter Maids”, obviously a nod to the Beatles, but they seem to be madam and her house of ill repute.  Apparently DiNA was placed there for some reason by the scientists ???

The issue ends with DiNA drawing a picture of the mask of The Gladiator and Shannon being set upon by a fleet of destruct drones, set upon her destruction!  The original series was suppose to go for six issues, as the first Event issue actually said on the cover one of six, but in the letters page of the second Image comic, George Perez stated that the comic would likely go nine issues.  But there were only two issue ever released!   There never was any additional story printed, so we’ll never know what was to come.

Personally I loved the George Perez artwork contained in these two issues, but I’ll admit to really not having a clue to exactly what was going on.  Therefore, I have to give these two comics only two (2) out of five (5) Legion Flight Rings!  It may have had beautiful art, but the story left me to confused and it never was completed.

And as a bonus, here is the cover to the Event # 1 of Crimson Plague, as well as, the cover to the Special Heroes Con edition that George did to benefit the Charlotte Firefighter’s burned children fund.  Both of these comics came out June 1997. 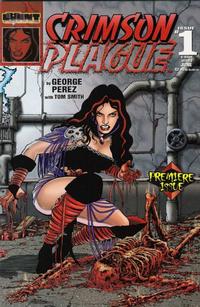 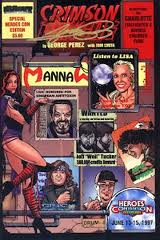