This week with all the hype about the upcoming Marvel’s Avengers Versus the X-Men storyline/crossover I’d like to go back thirty-four (34) years and look at Marvel Comics’ Avengers # 53, cover dated June 1968.  Take a look at the cover below and tell me if you notice something a bit similar. 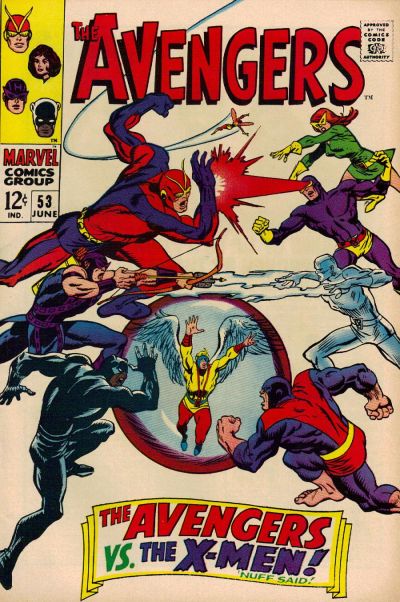 Yes, that’s right, this comic featured the Avengers versus the X-Men!  And it was handled all in one issue!  No special series with umpteen related cross over stories, just one well told story.  Well, if truth be told, the story of the X-Men battling Magneto story line that this issue wraps up, actually began in X-Men # 43 and ran in issues # 44 & 45 before crossing over and wrapping up in Avengers # 53.  But the actual Avengers / X-Men cross over was only in Avengers # 53. 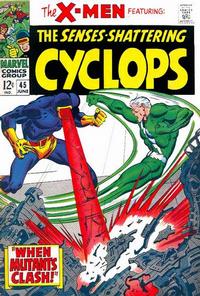 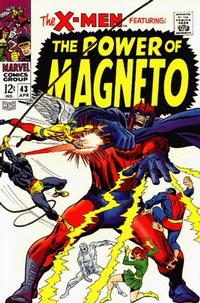 Here are the covers to those X-Men books!  So the story began in X-Men # 43 with Professor X’s funeral (don’t ask, just go with it) in  story entitled; “The Torch Is Passed!”  written by Roy Thomas and drawn by George Tuska and John Tartaglione.  The sometime hero, sometime villain, but full-time mutant, Quicksilver, attends the funeral.  He is spotted and confronted by the X-Men.  He flees!

The X-Men receive a message from the dear departed Professor X with his final request and also with the fact that he believes that Magneto has returned!  It is revealed that the Scarlet Witch is suffering from some kind of illness (actually the result of being grazed by a bullet at the United Nations in Avengers # 49) and Quicksilver was hoping that Professor X could help, but found him dead and buried!

The X-Men track down Magneto to his island hideout, and confronts Magneto but he, along with Quicksiver and the Toad easily overcomes them and takes them captive.

In issue # 44, the Angel manages to escape in a story entitled; “Red Raven, Red Raven!”, written by Gary Friedrich with Don Heck layouts, pencils by Werner Roth and inks by John Tartaglione.

And in issue # 45, Cyclops also manages to free himself, in a story entitled; “When Mutants Clash!” done by the same writer and artists as the previous issue.  This issue features a long fight between Quicksilver and Cyclops, with Cyclops coming out on top at the end of the issue.  And as Cyclops stands over Quicksilver the last panel shows the arrival of the Avengers!  Which brings us to Avengers # 53!

In a story entitled; “In Battle Joined!” written by Roy Thomas, with art by John Buscema and George Tuska, who also provided the Avengers VS. The X-Men cover on this issue, the Avengers confront Cyclops, but he thinks its some sort of trick by Magneto!  So how did the Avengers arrive on Magneto’s island at this moment?  Well, in a nicely timed flashback it is revealed the the Angel went to the Avengers to seek their help, but they found a listening device on him, and therefore, think he is in cahoots with Magneto!  Whew, this is getting confusing, but nicely sets up the Avengers versus X-Men battle to come!

Magneto manages to electronically enslave the X-Men, i.e. mind -controls them and a battle royal erupts between the Avengers and the Magneto controlled X-Men!  First we see the Black Panther face off against Hank McCoy (the Beast), it’s Goliath (aka Hank Pym/Giantman) against Cyclops, it’s Hawkeye versus Iceman and of course, we get to see the Wasp go face to face with Marvel Girl, though we don’t get to see any hair-pulling!  Darn!

Eventually, the Angel manages to turn off Magneto’s machine and the Avengers and X-Men join forces and attack Magneto.  Magneto sets off an auto-destruct plan and Quicksilver, the Scarlet Witch and tho Toad manage to reach an escape ship and when Magneto leaps to reach the ship, he only manages to hang on by one hand.  The Toad, who has been called a dolt, throughout the story, by Magneto stomps on his hand sending him to his doom, as the island blows up!

Or was this actually there first?  I’m so glad you asked, or was that me? 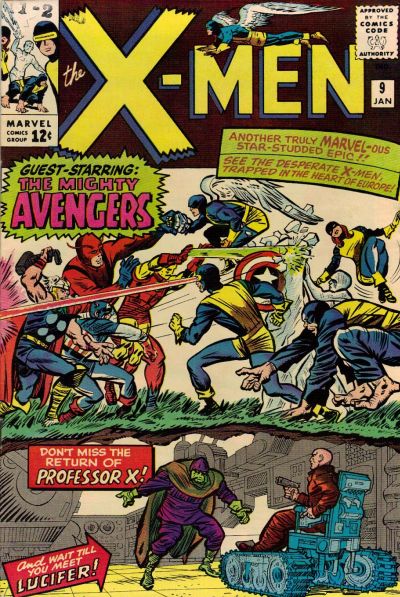 Yes indeed, the Avengers first met and clashed in X-Men # 9, in the story entitled; “Enter, The Avengers!”, written by the man himself, Stan Lee and pencilled by the King, Jack Kirby with inks by Chic Stone.

In this story, Professor X has tracked down Lucifer, the villain who cost him the use of his legs, but finds that his foe’s heartbeat is rigged to a giant thermal bomb.  The X-Men arrive at Professor X’s request, and run across the Avengers, who have also arrived, drawn by the evil detected by Thor’s hammer.  No, I don’t understand that never again seen power either!  In a classic Marvel hero vs. hero conflict, the X-Men have to stop the Avengers from taking down Lucifer, as the Avengers have no idea that if they defeat Lucifer, the world will be destroyed.  After Xavier gives Lucifer a mind blast that renders him unconscious, he contacts his team for help and the Avengers agree to let the X-Men clean up the current crisis on their own.  Then Cyclops uses his eye beams to disable Lucifer’s thermal bomb, ending the threat and the issue.

Not much of a Avengers versus X-Men battle at all, though it was nice to see Captain America, Iron Man and Thor make an appearance in this classic issue!  But I can see why Roy Thomas wanted to revisit the two teams, facing off against each other, three years later in Avengers # 53!

And before I close, let me rate Avengers # 53 as earning four (4) out of five (5) Legion Flight Rings!  And also, let me say, I am looking forward to the 2012 Avengers versus X-Men storyline, as well.  I just wish they could tell the story in a few less issues, but hey, they need to sell more issues to make more money, so I’m not surprised at all.