I WILL TELL YOU #52: The New DC Implosion

Only months into its relaunch, the first casualties from DC’s New 52 have been reported. OMAC, Hawk & Dove, Men of War, Static Shock, Blackhawks, and Mister Terrific will end in April with issue #8, although a number of new titles have also been announced for the following month.

In a general sense, this should come as no surprise; the scope of this relaunch was massive and while it would have been nice to see all of the new titles succeed, pretty much everyone knew that 100% success was unlikely. But the specific titles that are being cancelled should come as no surprise, either, at least to anyone who’s read an issue of any of them. OMAC has taken a lot of heat, as most any project that tries to ape Jack Kirby’s 1970s work usually does. As has Hawk & Dove, with fans citing the usual shortcomings that they cite with any Rob Liefeld project. And Mister Terrific seemed to be the comic that no one ever wanted or asked for. The rest, perhaps, just didn’t catch on.

There was no shortage of fans speculating which titles would go first, either, and the ones that got the axe were all odds-on favorites, in large part for the reasons mentioned above. I kind of wish I had speculated on this a little more myself early on, because I dumped five of these titles after their first issues. I would have seemed really smart if I had mentioned this publicly. Although, I actually stuck with Mister Terrific through issue #3, even though I was one of those who never asked for a Mister Terrific comic to be published.

So, I might not have been morbid enough to boldly predict the first wave of the DC New 52 Implosion, but by golly, I certainly have no qualms about predicting the second. Presuming there is one, and I believe there will be, because there are still plenty of titles from the original 46 still standing that have the reader in me scratching my head and the critic in me ready to explode. So, I’m going to take this opportunity to not only vent about some of these titles but also in turn predict the next five victims of the New 52 Implosion – Wave 2. You ready? Here goes: 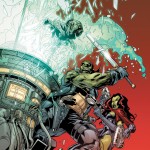 1)     Frankenstein, Agent of SHADE
So, what is this comic, exactly? A literate and well-versed Frankenstein monster is a key part of a covert ops organization that employs other monsters. So again I ask: what IS it? There’s this strange Peter Milligan / Grant Morrison-type weirdness-for-weirdness’-sake vibe here, which always gives me this uneasy feeling that I’m missing something. I’m sure there are those who dig this kind of thing, but I’m willing to bet not enough of them. After all, an effort has to fail commercially before it can be deemed a cult classic. This can be fondly remembered by those few once it’s gone. 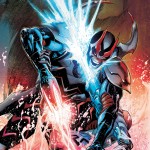 2)     Blue Beetle
It was only six years ago that we got introduced to a new incarnation of Blue Beetle, who as  of late had been hanging around the fringes of the DCU. So it was puzzling that this second-rate character was awarded a new title as part of the relaunch. This comic shows how deep DC had to dig to reach this magic 52 number that they’ve obsessively embraced in recent years, as witnessed by a story that features a re-introduction of the same character, that we didn’t need, and an origin, that we’ve seen before; namely in Spider-Man, Firestorm, Green Lantern, et al. We didn’t need this title before, and we don’t need it now, and we won’t have it anymore once DC figures that out. Again. 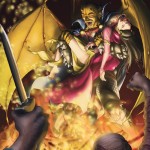 3)     Demon Knights
Does every single DC story that takes place in the past have to feature Vandal Savage? Set in the Dark Ages, this title seems insistent on establishing that the DCU existed at that time. And, um, I think we knew that. So that gives us Savage, Etrigan, Madame Xanadu . . . yawn. Pretty slim pickin’s back in those days. All this title proves is something that we already knew: that it would have sucked to have lived back then. And reading about it isn’t much better. Just because a comic can be set in a certain era, doesn’t mean it should be. These characters could never support a title before, and they’re not going to now. 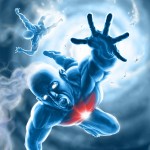 4)     Captain Atom
Older fans will remember how bad Superman comics were by the early 1980s; Superman’s powers had evolved so much over the years that no writer knew how to handle the character anymore. That’s about where Captain Atom is, and because of his non-iconic status, that’s probably where he’s going to stay. No writer has ever been able to make Captain Atom interesting, as it’s clearly difficult to find challenges for this character. The end result will be the ultimate challenge that no comic book character has ever survived: insufficient sales. Captain Atom will go down again. 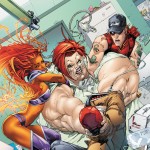 Red Hood and the Outlaws #8

5)     Red Hood and the Outlaws
I haven’t met a single female reader who likes this book, largely because of the portrayal of Koriand’r that panders to the basest urges of fanboys everywhere. But aside from the fact that, yeah, Koriand’r is hot, just to get that out of the way, I don’t know many guys who like this book either. It’s not like it’s not fun; it kind of is, but it’s competing with fifty other DC titles. If this had been slid in the publishing schedule a year or two ago, more readers would have taken notice, but as part of major relaunch, it’s getting drowned out, and probably won’t be around in the long run.

And I think that Frankenstein is toast. So there. Seeya.

Category: Comic BooksBy Jim JohnsonJanuary 24, 2012Leave a comment
Tags: I Will Tell You