Welcome back to the second Retro Review covering the pulp character, Doc Savage, in the comic books.  This week I’ll be reviewing Doc Savage B & W Magazine # 1 from Marvel Comics.  The magazine is cover dated August of 1975 and features a still of Ron Ely, as Doc Savage, from Doc Savage: The Man of Bronze, the 1975 movie from Warner Brothers. 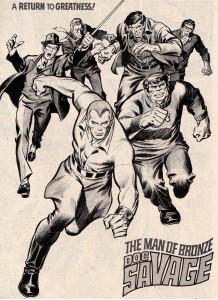 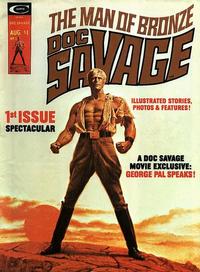 As I wrote last week, Marvel Comics had published eight (8) issues of a regular sized comic book which featured adaptations of the Kenneth Robeson (Lester Dent) novels, as published in reprint form by Bantam Books.

But with this black and white magazine, we got to see new, all original stories by the Marvel Comic Book group.  This first issue was written by Doug Moench, pencilled by John Buscema, and inked by Tony DeZuniga.  ANd the story was entitled; “The Doom On Thunder Isle”.

Moench got things started with a bang!  As after the Return to Greatness splash, seen to the right, the first story page features an exploding skyscraper.  In the words of Moench; “the skyscraper explodes with a cacophony … shattering one of New York’s newest multi-million dollar stairways to heaven.”  Borrowing a song title from the brilliant band, Led Zeppelin!

Once again a Marvel writer introduces us to Doc Savages aides/ friends (just in case the readers had not picked up the color series that had just wrapped up before this issue hit the news stands!) while Doc, himself, is performing his daily regiment of exercises!

Next we and Doc’s aides are greeted by a female visitor, a Miss Angelica Tremaine, who has been sent to Doc, by her brother, Winston Tremaine, a friend of Doc Savage apparently.  Miss Tremaine delivers a coded note to Doc. Doc discovers an unseen listener and confronts him.  It’s at that moment when three “bizarrely attired” men burst in through the bulletproof windows!

Doc defeats the intruders, who bear “electricity ray guns”, but they commit suicide rather than be interrogated by Doc and his aides!  Doc goes on to decode the message and rushes to where Miss Temaine’s brother has gone.  Only to arrive too late to prevent his kidnapping!  THen returning to their headquarters, they find Angelica Tremaine has been kidnapped, as well.

Doc Savage soon tracks down a silver zeppelin which is responsible for the attacks on New York’s skyscrapers!  He tracks it with his own zeppelin, only to have it shot down, but due to his advance preparations, he and his aides escape via a small submarine, the Helldiver, and they continue following the silver zeppelin!  The head bad guy reveals himself to Miss Tremaine and calls himself the Silver Ziggurat!

All in all, a pretty good Doc Savage story, that could have come directly from the pulps, but didn’t!  The story by Moench is excellent and the art by Buscema and DeZuniga is terrific.  I give this first issue of Doc Savage Magazine four (4) out of five (5) Legion Flight Rings!

But like the color series before it, Marvel just managed to publish eight (8) issues of this black and white magazine before saying goodbye to Doc Savage.  I’m not sure if they didn’t sell enough books, or if their license ran out, but either way that was it for Marvel Comics and Doc Savage.

Before I go, I want to mention that Doc Savage wasn’t done, because in 1987, D C Comics acquired the rights to publish comic stories about Doc Savage, first putting out a four (4) issue mini-series written by Dennis O’Neil, with art by Adam & Andy Kubert.  then in 1988, they began a twenty-four (24) issue run, again written by Dennis O’Neil, but with art by Rod Whigham and Steve Montano.  Here’s what the first issues of those books looked like. 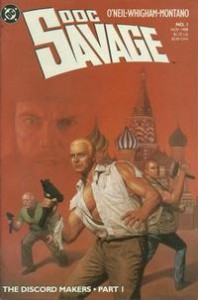 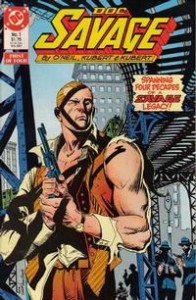 Maybe if there is enough interest, I’ll review those books some day in the future!  And of course, once DC Comics lost the license to publish Doc Savage adventures, other publishers, like Dark Horse Comics secure the license and published stories featuring Doc and his five aides!

But that’s enough for this installment!  I hope you’ve found my reviews interesting!  Thanks!