This week I’d like to write about Doc Savage, maybe the world’s first super-hero.  Specifically Marvel Comics Doc Savage # 1 & 2.  But before I get to that I want to first mention that Doc Savage was created by Kenneth Robeson, actually a house name for Street & Smith, for the pulps, back in the 1930s.  Robeson was actually writer, Lester Dent and the first Doc Savage pulp was cover dated, winter 1932-33.  And Doc made his first comic book appearance in May of 1940 in Street & Smith’s Doc Savage Comics # 1.  This golden-age series last twenty (20) issues, with the last published in October of 1943.  Here’s the first cover: 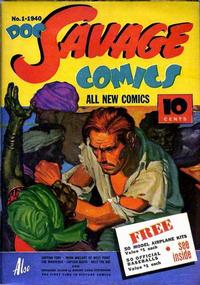 Then it was twenty three (23) years later before Doc made it back into the comics.  By then Bantam Books was reprinting the old pulp stories in paperback book form and the public was buying them up like crazy!  The reprint series was a big hit and lead to other old pulp characters getting revived in paperback book form, as well.  We got to see The Shadow, The Spider, Operator Six, The Phantom Detective, The Avenger, and others during the heyday of pulp reprints in the sixties!  Maybe elsewhere, I should write about those paperback books, but not here and not today!

Anyway, cover dated November 1966, Dell Gold Key Comics published their own Doc Savage # 1.  It was a thirty-two (32) page adaptation of Doc’s seventeenth pulp adventure, and the second Bantam paperback book; “The Thousand -Headed Man”.  It was written/adapted by Leo Dordman and drawn by Jack Sparling.  And here’s that cover, for your viewing pleasure: 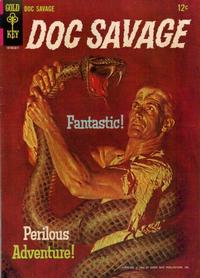 But that was the only issue to be published from Dell’s Gold Key imprint.  Then six (6) years later Marvel Comics came out with their own adaptation of a Doc Savage novel.  Cover dated October 1972, Marvel’s Roy Thomas plotted and Steve Englehart wrote an adaptation of the first Doc Savage story/pulp; “Doc Savage, The Man of Bronze”.  It was pencilled by Ross Andru and inked by Jim Mooney.  The adaptation spanned two issues.  The first issue had a very nice cover drawn by John Buscema and the second (as well as the third issue) had a cover by Jim Steranko.  And because I’m such a nice guy, here are those two covers, just for you: 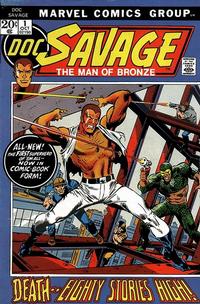 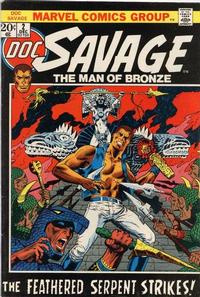 The story begins with a symbolic splash page of Doc Savage and his five aides leaping through  a page of writing, whether is is meant to represent the pulp page or a paperback book page is unknown, but never the less, they are leaping from out of a prose story and into the new Marvel Comic Book!

Marvel proudly announces; “At last! In Comic-Mag form, Doc Savage, the Greatest Pulp Hero of all!”  I guess they forgot about the Dell Gold Key comic in 1966!  Well, it’s Marvel Comics, so I guess they wouldn’t want to acknowledge Dell, now would they?

The actual story opens on page two, with the great line; “There is death afoot in the darkness!” and shows the reader, a man with crimson fingertips scaling a partially complete skyscraper.  He carries a rifle with a sniper’s scope and when he reaches the top he focuses the scope on the 86th floor of a nearby building.  One that houses Doc Savage and his five friends.

And who are those friends?  First off, there is Monk, Lt. Col. Andrew Blodgett Mayfair, a world renowned chemist.  Next is Ham, Brig. Gen. Theodore Marley Brooks, a terrific lawyer and impeccable dresser.  Third is, Renny, Colonel John Renwick, a world renowned engineer.  Next is, Long Tom, Major Thomas J. Roberts, a genius at electricity.  And last, but certainly, not least, Johnny, William Harper Littlejohn, one of the greatest living experts on geology and archaeology!  And it is these five men that make up Doc Savages friend and aides de camp!

But back to the comic at hand.  The aides are introduced to the reader on the next couple of pages and finally Doc Savage makes his appearance on page five!  The sniper fires upon Doc, but the gun doesn’t fire bullets, oh no, Englehart has it fire a laser beam!  The sniper misses due to the refractive glass installed in the windows of Doc’s headquarters.  Renny and Long Tom figure out from the angles where the shot was fired from.  Ham rushes to Doc’s secret autogyro to act as ariel scout and Doc and the remaining aides rush to his newly designed runabout.

Andru and Mooney give the reader the treat of seeing Doc Savage ride outside the vehicle on the running board, as he was often “seen” doing in the pulps!  They arrive at the unfinished skyscraper and Doc scales the building and confronts the sniper.  Doc overcomes the sniper and discovers that he speaks ancient Mayan!  Before Doc and force the man to give him any information, he leaps to his death saying; ” I will never betray the Son of the Feathered Serpent!”

Doc and his aides return to their headquarters only to find a warning written on their wall.  “Turn Back … Lest the Red Death Strike Once Again!”  There is a one page epilogue and the issue ends!

Issue two (2) immediately throws the reader into the thick of things, with Doc and his friends being blasted out of the sky while on the way to find the Valley of the Vanished within the Country of Hidalgo!  Doc and his aides survive and borrowing another plane, manage to find the lost valley!  They are met by a group of ancient Mayans, including their King, Chaac and his daughter, Monja.  Doc is surprised to find they speak English.  As it turns out Doc’s father, Clark Savage Sr. had already found the lost civilization and made arraignments with the Mayans to fund his and his son’s mission to help people around the world.

But their is also a group of Mayans who are against Doc and any outsiders, these are lead by the Son of the Feathered Serpent and his chief aide, Morning Breeze, chief of the Mayan warriors!  Their first night in the valley and Monk discovers Morning Breeze kidnapping Ham, Long Tom & Johnny and they are thrown to their deaths in a bottomless pit!  Or would have except Doc and Renny had also overheard the plot and concealed themselves on a ledge in the pit and caught their friends as they were thrown to their deaths!

The Son of the Feathered Serpent releases the Red Death upon the Mayans and destroys the only antidote.  Doc determines the cause of the Red Death is a virus and slaves to create an antidote in time to save the dying Mayans.  He succeeds, but the Mayans turn against him and he is forced to provide the antidote while the Son of the Feathered Serpent’s men try to kill him at every step of the way!

Stay tuned next week for the next Retro Review, where I’ll be covering the Marvel Doc Savage black and white magazine, as well as, DC Comics 1980 Doc Savage series!