For this week’s RETRO REVIEW, I’ve gone back to another Marvel Comics Avengers book, Avengers # 66, cover dated July of 1969.  It features a very nice John Buscema / Sam Grainger cover with a interesting perspective!  The cover is without word balloons, which personally I prefer and simple states; “The Great Betrayal!”  Though as you’ll see below the splash page shows the actual title of the story is simply; “Betrayal!”  And for the record, that splash page is one of my all time favorites!  Here’s the cover: 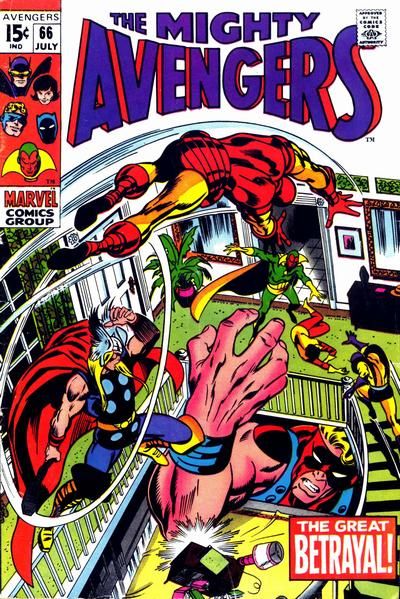 As I mentioned above, the interior story had a slightly different title, than what the cover stated, but never the less, this issue of The Mighty Avengers is special.  It is written by Roy Thomas and is pencilled by a young Barry Smith, before he changed his name to Barry Windsor Smith, with the inks provided by Syd Shores.  Actually this issue was only Smith’s seventh comic story.

Barry had a raw talent, and Stan Leefound it worth giving him a chance.  And this issue of The Avengers shows some flashes of that talent, that was to later develop into super-star status!  I mentioned the splash page earlier, so here it is.  Simply?, Yes!  Striking? Yes!  I think it’s outstanding! 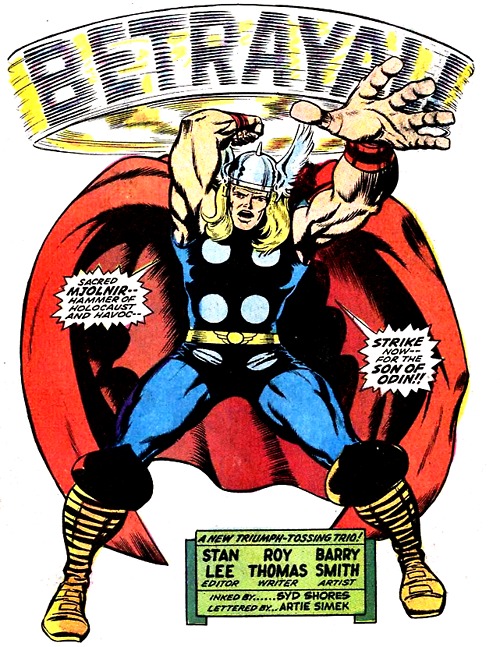 The story itself opens with the Avengers testing the their mettle against the metal, Adamantium aboard the S.H.I.E.L.D. helicarrier!  Each Avengers tries their powers against the metal and comes up wanting!  While this is going on, something is affecting the Vision, and eventually causes him to disappear from the helicarrier!  The Vision searches for the reason he has been pulled away from his fellow Avengers and the rest of the Avengers have returned to Avengers Mansion.  Hank Pym, in is guise as Yellowjacket returns to his lab.  Iron Man chooses to workout in the Avengers “Danger Room” equivalent.

Meanwhile, the Vision has returned to the S.H.I.E.L.D. helicarrier and on page 13 of the comic, Smith provides a pin-up of the effect of walking through something that isn’t!  Huh?  take a look: 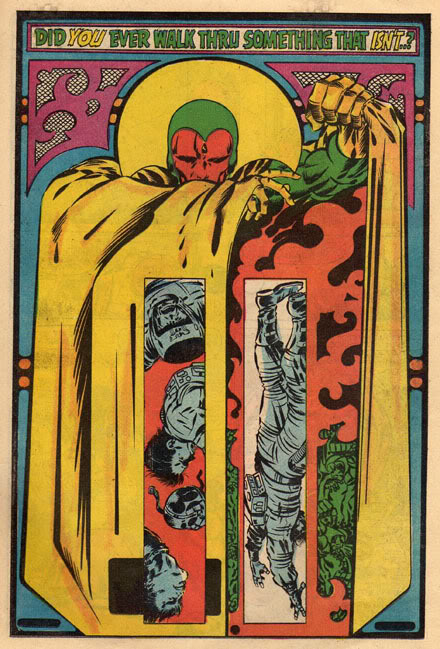 It turns out that the Vision has returned to the helicarrier to take possession of the Adamantium!  On page 15 of the story, is another Smith  full page of the Avengers at rest within Avengers Mansion, that is one of my favorites! While the Avengers are discussing the missing Adamantium, they hear a cry for help from upstairs.  Only the Wasp is not downstairs with “the boys”, so they all immediately rush to the Wasp’s side.  It is at this moment that the Vision appears and does battle with his fellow Avengers!  And what has caused him to turn against his teammates?  Well, the last page of the story, another full page illustration, reveals the return of Ultron-6!  But this isn’t any old Ultron, this Ultron-6 is composed of the indestructible Adamantium!

Wow, talk about leaving you on a cliffhanger!  The story of the Avengers versus Ultron-6 would continue in Avengers # 67 & 68, but I’m going to stop here.  I give Avengers # 66 four (4) out of five (5) Legion Flight Rings.  Smith’s art is definitely in full Jack Kirby mode, but personally I don’t have a problem with that!  You won’t go wrong adding this comic to your collection!