Avengers Versus X-Men – Rally And Vote For Your Team!

Comics fans everywhere are already engaging in heated debate as to who will rule the roost when the Avengers and the X-Men square off in April’s Avengers vs. X-Men event from Marvel Comics!  Of course, Back to the Past will be right in the fray with a Tuesday night release party on the #1 issue – but we’re doing more than that, we’re bringing the debate to YOU!

Join us on Thursday, February 9th starting at 6PM for the Avengers vs. X-Men Rally, leading up to a debate between representatives of the Avengers and the X-Men at 7PM, immediately followed by a vote which will determine our store’s allegiance for the release party in April. 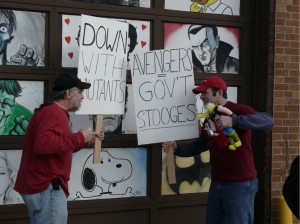 From 6PM to 7PM we encourage all fans of either team to show up and display your support for your favored side!  Decorate yourself and your signs as we will be giving out prizes for the best fan support!  Let’s show the unsuspecting traffic on Inkster Road what a horde of enraged comics fans looks like!

At precisely 7PM we will open the floor to representatives of both the X-Men and the Avengers teams to debate their reasons why you should vote for them.  Will they be keep the debate civil or will it devolve into fisticuffs?  Will they answer the moderators penetrating questions?  Will they take questions from the audience?  Which team will claim the Beast as their own?  Will they be able to win you over to their side?

Immediately following the debate, the polls will open and all attendees will have the chance to vote for their team.  Each attendee will receive a nifty magnet declaring “I Voted X-Men!” or “I Voted Avengers!” (depending on your choice, obviously), as well as an entry into a giveaway to be done on the Tuesday in April when Avengers versus X-Men #1 officially ships.

In addition, one lucky voter on the winning side will be drawn to receive $100.00 in back issues!

Your votes will determine which allegiance Back to the Past declares for the big release party in April, and therefore what special offerings will be given out at that upcoming event.

So come on out and support your favored team on February 9th & watch this space for further updates as they occur!