This week I bring to your attention, the original run of Marvel Comics‘ X-Men franchise.  The comics are entitled X-Men # 100 and X-Men # 101 on the covers, though on the splash page it says The Uncanny X-Men in both books.  Actually the original run was simply titled The X-Men through issue number 141 and it was re-titled The The Uncanny X-Men with issue number 142.  But enough of that bit of history and on to another! 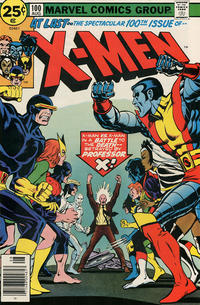 The X-Men book had originally stopped publishing original stories with issue # 66.  Marvel continued to publish the comic, but with reprints from issue # 67 through # 93.  Marvel re-introduced the team and a new set of X-Men with Giant -Size X-Men # 1.  Then they restarted the original number sequence with X-Men # 94,cover dated August 1975.  Then six issues later, though it was a year later, as the book was being published on a bi-monthly schedule upon its return, finally the one hundredth issue of The X-Men saw the light of day, cover dated August 1976.

The story was written by Chris Claremont and drawn by artist Dave Cockrum.  The story was entitled;   “Greater Love Hath no X-Man …”.  It picks up from an ongoing story line that started a few issues earlier with the villain of the piece, Doctor Steven Lang who with his “Project Armageddon”, plans the extermination of mutantkind!  He has managed to capture Jean Gray (Marvel Girl) and Scott Summers (Cyclops).  The new X-Men fly into space to rescue their teammates.  But upon reaching the orbital platform they meet the original X-Men, who attack them!

A battle royale ensues between the two teams, with neither team gaining the upper hand.  Professor X even enters the fight by punching Wolverine.  Jean steps in and Wolverine “guts her like a fish”, much to his teammates shock!  A turn of the page and it is revealed that Jean and all the original X-Men are modified Sentinals!  Lang is horrified that his plans have been revealed and it’s at this moment that Cyclops breaks free and frees Marvel Girl and Professor X, as well.

In the ensuing battle, Doctor Lang meets his doom and the X-Men must flee the space platform in a damaged shuttle.  Jean Grey knocks out Scott Summers and orders the rest of the X-Men to a safe chamber within the shuttle, as she assumes the controls of the ship and plans to martyr herself in an effort to save the rest of her teammates!  The issue ends with her crying out to Scott as radiation floods the shuttle cockpit! 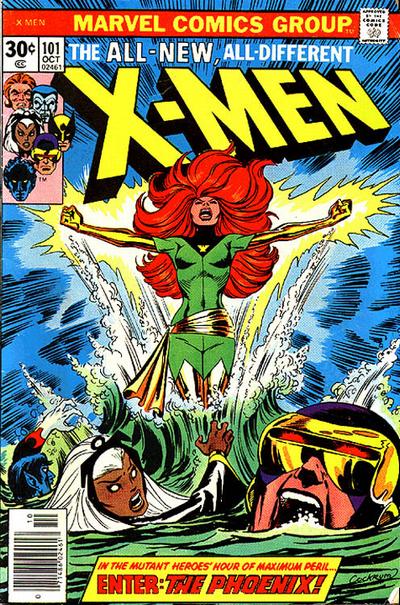 Issue number 101, cover dated October 1976, opens as Marvel Girl crashes the shuttle back to earth, saving the rest of the X-Men, but has apparently she has sacrificed her own life to save theirs!  The story is entitled; “Like a Phoenix From The Ashes” and it’s again by Misters Claremont and Cockrum.  Things look bad, until on page five, Jean rises from the crash, proclaiming that she is no longer the woman they knew.  She “is fire and life incarnate! Now and forever — I am Phoenix!”  Thus is born The Phoenix from the ashes of Jean Gray, aka Marvel Girl.

And with that major plot point, and new origin, nothing more is said about the Phoenix.  Sure Scott mopes around for a couple pages worrying about Jean and Wolverine goes out and buys her some flowers while the rest of the X-Men hang about the hospital waiting on news.  Eventually Doctor Corbeau comes out to announce that Jean is “going to be just fine.”  Rather anti climatic, no?

Now that Jean is safe for the time being, Professor X sends the new X-Men to Ireland, where Banshee has inherited the Cassidy ancestral home.  So off they all go.  The arrive at the castle and Storm takes a shower and Nightcrawler plays with an image inducer.  They then head for dinner, only to be met by Black Tom Cassidy and the Juggernaut.  This ends this issue on a new cliffhanger!

By today’s standards this is pretty low key for such a major event.  Heck today it would likely rate a six or twelve issue mini-series, with multiple cross-over issues running throughout all the Marvel books for three or four months.  But back in 1976,Chris  Claremont simply wrote an interesting story that just happened to kill off a major character and in the very same issue, brings her back as a new super-heroine!

That just doesn’t happen now-a-days, does it?  And I truly miss those days, yes I do!

I give these two issues a rating of four (4) out of five (5) Legion Flight Rings!  And would ask Marvel Comics to stop the “event” mentality and return to the days of just good story telling.  Please I’m begging you!

And that’s all for this RETRO REVIEW.  See ya all next week!