Last week, as you remember, I spoke of how DC had managed to publish both Action Comics and Detective Comics not only on a regular basis for over seven decades, but also managed to keep those titles’ numbering intact; until this month anyway. But then I also mentioned that DC had no shortage of ongoing titles that had sputtered through their existence over the years, and decided to pick on their Titans franchise to illustrate the point. And I also blamed that franchise for ushering in the preponderance of relaunches that have followed in the 30+ years hence. You can read all about that here. 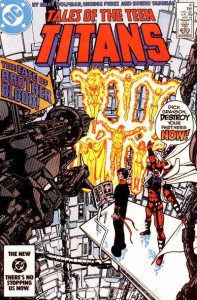 Or to recap, the first Teen Titans began in 1966, went on hiatus in 1973 with issue #43, returned in 1976 with issue #44, and was canceled in 1978 with issue #53. New Teen Titans launched with a new #1 in 1980, rather than simply resume publication as Teen Titans with issue #54. The decision to rename and renumber the title was only the first of many such moves, which devoted Titans fans can probably recall all too clearly. Exactly what were the subsequent moves, you want to know?

I will tell you. Strap in. 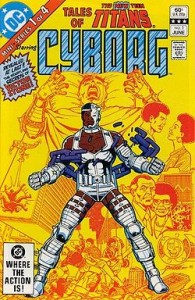 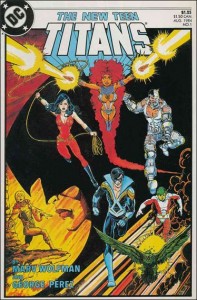 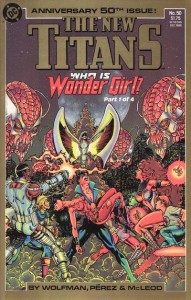 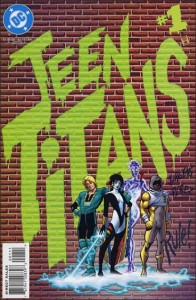 The New Titans continued all the way until 1996, when it was cancelled with issue #130. But the era was not without other related titles; a second title, Team Titans, was created in 1992, and ran for 24 issues until it ended in 1994. After the end of The New (no Teen) Titans run in ’96, another new series was created, which was simply named Teen Titans. Not The Teen Titans. No “The.” No “New.” Just Teen Titans. Guess they got young again, even if they finally weren’t “new” anymore. This series also ran 24 issues before it, too, ended, in 1999. 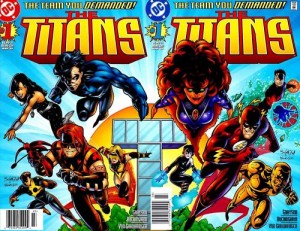 Okay. DC then followed up with another Titans title in ’99 called, even more simply, The Titans. No “New.” No “Teen.” But the “The” was back, for fans who were nostalgic for it. In 1999, DC also published a Titans annual, but it was a collection of reprints from The Teen Titans. That is, the very first Teen Titans. You know, the first DC series that featured kid sidekicks teaming up in a comic with the word “Titans” in the title. Got it? Got it. 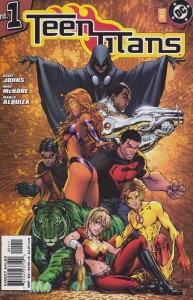 The (not New, not Teen) Titans ran for 50 issues, before that title called it a day in 2003. Then, also in 2003, DC began another title called Teen Titans. No “The” again. No “New” either. The exact same name as the title from 1996-1999, but with a new team, even though they weren’t called “new.” That same year, in an apparent concession that there were no more combinations of the words “New”, “Teen”, and “Titans” that hadn’t been used already, DC also began Teen Titans Go!, an anime version of the team based on the Cartoon Network series. Teen Titans Go! ran for five years, before it indeed went with issue #55 in 2008. But that same year gave us the birth of Tiny Titans, not new(born), and not (pre)teen. And that title actually continues to this very day. But Teen Titans, the newer Teen Titans, the one mentioned at the beginning of this paragraph and not to be confused with any of the other New Teen Titans, was the latest to fall, at issue #100, just last month.

There. I told you. Towel, please. 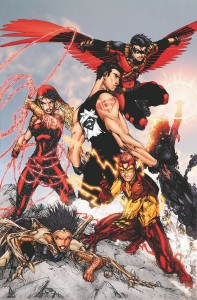 So is this it, then? Can we expect Teen Titans #1 to eventually lead directly to Teen Titans #100, or even #50? Or will this title, or any and all of DC other 51, be subject to countless stops and starts at some point? The current relaunch illustrates the possibility that such a relaunch can be a good thing if it brings in readers, but the multiple Titans titles over the years illustrates what happens if those readers can’t be otherwise kept. Playing with numbers might sound like a good idea, and sometimes it is, but it’s not a substitute for just telling good stories.

Category: Comic BooksBy Jim JohnsonOctober 4, 2011Leave a comment
Tags: I Will Tell You