This week I’d like to write about a comic book from Tower Comics, cover dated, November 1965, that comic is T.H.U.N.D.E.R. Agents # 1.  It appeared on the stands alongside D C and Marvel Comics during the later half of the summer of 1965.  It was a sixty-eight page book for only twenty-five cents. 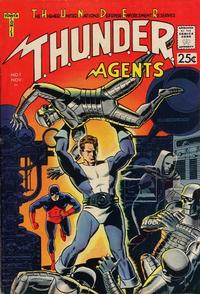 This was about the same size as a DC or Marvel annual or special, but this was a regular size Tower Comic!

I will admit to not finding Tower Comics on the various comic book spinner racks where I bought comic books, but once I discovered the quality of art work in these comics, I quickly searched them out and added them to my collection!  So let me jump right in and let you know what you were/are missing if you don’t have these books in your collection.

The first cover is well drawn by Wally Wood, who both pencils and inks the cover.  And the comic itself features, depending on how you count them, as many as seven (7) stories.  Six (6) comic stories and one (1) text story, with the second story continued into the last story in the comic.  Hopefully that made sense to all of you.  Or you can count that a one long twenty (20) page story!

Up first was a short four (4) page story explaining exactly what the T.H.U.N.D.E.R. Agents were and how they came to be in a story entitled; “First Encounter”.  This was written by scripter Len Brown, and drawn by cover artist,Wally Wood.

The second story introduces the hero, Dynamo, an agent by the name of Leonard Brown in a ten (10) page story.  Nothing like naming the lead character after yourself, eh? As the story is written by Len Brown, as well as pencilled and inked by Wally Wood. This story is the first appearance of Dynamo and the and the beautiful Iron Maiden, who becomes his major nemesis and as a twist, a possible love interest, as well, but that’s to become a later plot point in the series!  Dynamo gains his super strength power by wearing a special belt created by T.H.U.N.D.E.R.

The third story is also a ten (10) pager and is untitled.  This story introduces the hero, NoMan!  A hero who is mentally projected into the bodies of androids, one at a time, thus making himself unkillable!  The villain in this story is Demo, who like the earlier Iron Maiden, is under the leadership of The Warlord!  This story is written by Larry Ivie, with the art, both pencils and inks, by Reed Crandall.

Next up is a short two (2) page text story featuring NoMan written by Larry Ivie!

Which brings us to the next story, this time twelve (12) pages long, entitled; “The Enemy Within”.  This chapter introduces the reader to the hero, Menthor.  The scripter is a Lou Silverstone and the splash page pencils provided by Gil Kane, with the rest of the story pages done by George Tuska.  I am totally unfamiliar with Mr. Silverstone, but I think most of you will remember Misters Kane and Tuska from many Silver Age Marvel and DC comics they have contributed art to!  It’s an interesting premise, as the reader isn’t sure which side the man under the Menthor helmet is on.  Is he a “good guy” or a “bad guy”?  As it appears that the helmet causes a subconscious personality change in the person wearing the helmet!  I sure didn’t see that one coming!

The next story is ten (10) pages and features, the T.H.U.N.D.E.R. Squad and is written by Larry Ivie with artwork by Mike Sekowsky and Frank Giacoia.  The squad is made up of non-powered heroes; Guy, their squad leader, Dynamite, a weapons expert, Kitten, their technical device expert, “Weed” a chain-smoking Locksmith and “Egghead” their super-brilliant strategist!

And finally the comic closes with another ten (10) page story entitled; At The Mercy Of The Iron Maiden”, written by Wally Wood and Dan Adkins, with art by the same two gentlemen.  This story brings together  NoMan, Menthor and the T.H.U.N.D.E.R. Squad, as they attempt to rescue Dynamo from the Iron Maiden’s clutches!

A pretty good opening to a new comic book line from a new comic book publisher.  They seemed set to give Marvel and DC a run for their money.  I give this issue three (3) out of five (5) Legion Flight Rings!  But Tower Comics suffered from distribution woes and a promising beginning  came to an untimely failed ending after only twenty (20) issues!  Plus a few solo comics featuring the various individual heroes and Tower Comics were no more!  But they are worth collecting and I recommend you pick up them if you can!