You know what I like about being old? I will tell you: being old means I’ve been around long enough to recognize a rerun when I see one. Like, say, that new bogus Melrose Place series that the CW Network tried to launch a couple of years ago; a series that much of its intended audience didn’t realize was a remake of the old bogus Melrose Place series that aired during the 90s. Or, that Keanu Reeves was, thankfully, not the first to play Klaatu in a film called The Day The Earth Stood Still. And I actually knew that The Man Who Sold The World was a David Bowie song, before the late Kurt Cobain thought it necessary to tell us that at the end of Nirvana’s performance of their own version.

So, when Marvel Comics announced a couple of months ago that “the biggest comic book event in history” was set to begin in April, I shrugged. Not because I’m jaded or anything, even though I’m pretty sure that we’ve been fed that line before, or one very similar to it. Substitute “greatest threat” or “deadliest foe”, and I’m pretty sure it’s been handed to us already, and probably not very long ago. The sky has fallen many times, and yet we still stand. 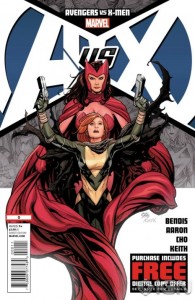 Biggest. Event. Ever. At least, Marvel says so.

No, I shrugged because this big event is, well, two superhero teams fighting each other. I am of course referring to the upcoming Avengers vs X-Men maxi-series and all of its associated tie-ins. Or, #AvX, as its tweets on Twitter are twending. Puddy tat. Now, I’m not saying it’s not a cool idea or that it’s going to be bad, or anything; The Avengers was the title that got me into comics and I was as big a fan of The X-Men for many, many years; so as a reader, I’m actually kind of looking forward to it.

And as a fanboy, I’m pulling for the Avengers to smoke the mutants. There; now you know where my allegiances lie.

But, “the biggest event in comics history”? Come on, Marvel; let us be the judge of that, after it’s all said and done. I mean, the Avengers just fought the Avengers, for crying out loud. That is, the New Avengers fought the New Dark Avengers, or some such, and hardly anyone even talked about it. And the X-Men just fought the X-Men in that Schism thing, which was one of those “things will never be the same”-type events, as opposed to the currently discussed “coolest thing ever”-type events. Maybe two teams fighting each other, instead of amongst themselves, is a big deal, in relation to recent battles. 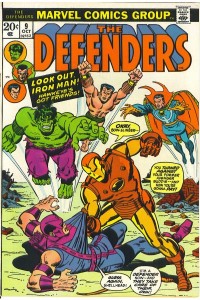 But is it a bigger deal than say, Secret Wars was? Not that I’m out to defend that polarizing event, one of the very first of its kind, from 1984. Although I did enjoy it a lot more that most readers would admit to. I’m pretty sure Marvel used a biggest / greatest / grandest tagline to promote that event, too. What about the Avengers / Defenders clash from 1973, which really was a pretty big deal back in the day? Or when the Avengers and Fantastic Four first clashed? Or Reed and Sue’s wedding, a couple of years later? How about the Human Torch vs the Submariner, back in 1940, and the whole fire vs water motif that Marvel then billed as “the battle of the century?”

Biggest event in comic book history, Marvel? Good luck. You’ve got some big shoes to fill. Namely, your own. 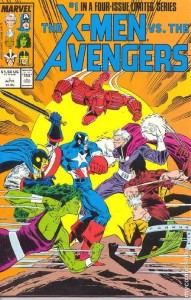 This has happened before. Although not everyone will remember.

But forget all of that. Forget big events and epic battles. Let’s get back to the whole thing about reruns. A quarter of a century ago, he said with his old man voice, and right around this time of year, in fact, Marvel kicked off a mini-series entitled, guess what? X-Men vs The Avengers, which featured a story where, yep, the X-Men fought the Avengers. Which might explain why this time, Marvel called it Avengers vs X-Men, so no one could, you know, accuse them of retreading old ideas.

No hashtag to generate buzz, back in those pre-internet days. No big marketing push, at least by today’s standards. No big grandiose event. Just a simple, four-issue mini-series, which in itself was a fairly new idea, back in 1987. Back then, Marvel was just starting to figure out that it had a vastly-undermilked cash cow franchise called The X-Men, and so they started cashing in on it. New Mutants had been running for years and doing well, and X-Factor was a popular title a year after its launch, which prompted Marvel to wade deeper into the waters with mini-series like this one, as well as another called Fantastic Four vs. X-Men, which was running concurrently.

Now, if you don’t remember a previous X-Men / Avengers limited series, don’t be too hard on yourself; while it wasn’t a bad story by then-Avengers writer Roger Stern, and it was one of artist Marc Silvestri’s early efforts, it just wasn’t very memorable. Maybe it was so forgettable, in fact, that Marvel forgot they had done a similarly-named series already when they planned this new one.

But, I remember. Maybe I can’t remember what I had for lunch or where I parked my car when I leave work for the day, but by golly, I can remember useless stuff like a forgotten comic book title from the era of big hair and Miami Vice. I remember, and therefore, I shrug.

So, it’s on you, Marvel. Impress us. Give us something that all of us, not just those with a talent for retaining useless information, will remember in another 25 years. Fondly remember, that is, for it is you who are selling this as the biggest event ever. Which kind of implies, you know, that we’re gonna like it.

I don’t know about you, but I’d be pretty nervous if I promised something like that.