It has been a while since I’ve done a RETRO REVIEW on a D C book, so this week I turn my column to; Justice League of America # 200.  The comic is cover dated March of 1982 and features a very nice wrap-around cover by George Perez.  This book wraps up George’s involvement with the Justice League of America (JLA) after a, too short, ten (10) issues.  He had just started working for D C Comics in 1980, while still working at Marvel Comics.  He had signed on to do the artwork for a new series, The New Teen Titans for DC, but JLA artist Dick Dillan, while working on issue # 184, unexpectedly passed away, at the young age of fifty (50).  So George was able to realize a life long dream of drawing the Justice League of America.  He drew issue # 184 through 186, then having got ahead on the New Teen Titans, returned to do issues # 192 through 197 and then finally, along with a number of well known DC artists, the Justice League of America anniversary issue # 200!  Here’s that wrap-around cover: 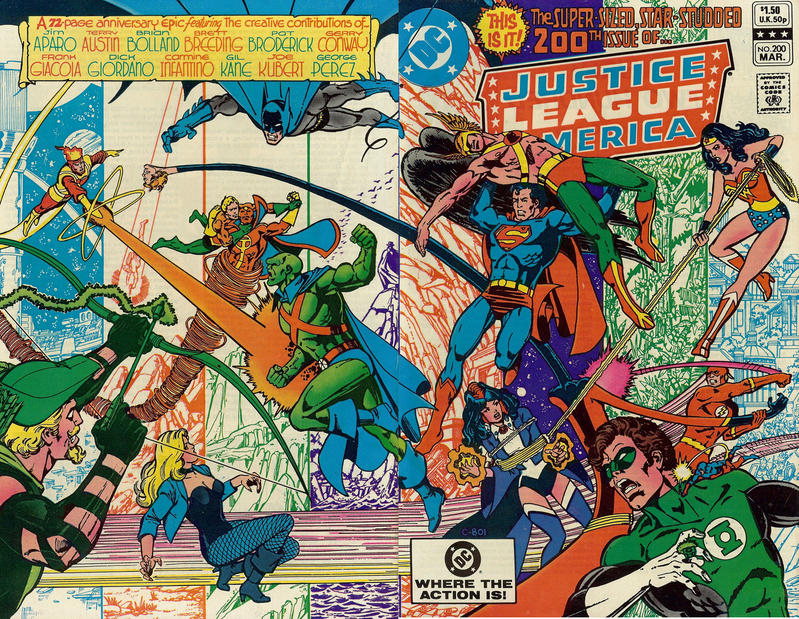 George provided the first chapter art, artwork between the individual chapters done by the other artists, and also the twenty-two page final chapter of this seventy-two (72) page comic!  This truly is a comic worth the cover notated: “This is it! The Super-Sized, Star-Studded 200th Issue!  George ended up providing the pencils for thirty-six (36) of the seventy-two pages, or just under one half of the artwork!

The story opens with a short recap of how the Justice League of America came together and features the original team, made up of Aquaman, Batman, the Flash, Green Lantern, the Martian Manhunter, Superman and Wonder Woman.  Also featured are the newer members; the Atom, Black Canary,the Elongated Man, Firestorm, Green Arrow, Hawkman, the Red Tornado and Hawkman.  And that’s not all, the story also had special appearances by Adam Strange and the Phantom Stranger!

The story opens with Firestorm on monitor duty in the JLA satellite, 22,300 miles above the Earth!  He is attacked by J’onn J’onzz, the Manhunter from Mars! J’onn pretty much wipes the floor with Firestorm and leaves him unconscious!  Firestorm signals the rest of the Justice League, but only the newer members respond and join him aboard the satellite.  Oh yeah, Snapper Carr also responds!

The newer members decide to search out the non-responding members and Firestorm and Snapper Carr are left to monitor things from the satellite!  The next chapter features Aquaman battling against the Red Torando, with the Phantom Stranger dropping by to observe the action!  But its actually the Stranger, who fells the Tornado.  Firestorm recovers Reddy and returns with him to the satellite for repairs.

The next chapter shows us the battle between Wonder Woman and Zatanna.  Wonder Woman downs Zatanna and she has to be healed by the Amazon’s Purple Ray.  Next up is Green Lantern versus the Atom (drawn by Gil Kane, who became famous drawing this two heroes in separate books) during the sixties.  The Atom manages to overcome Green Lantern, but when he tries to determine what’s going on, Green Lantern doesn’t recognize Ray Palmer and manages to turn the table on the mighty mite!  The Atom manages to escape the confining green bubble that the Lantern has left him in and he, as well as, the healed Zatanna return to the satellite.

Next the scene switches to the Flash versus the Elongated Man, drawn by Carmine Infantino, who became very well known while drawing both of these characters for D C Comics!  The Flash beats Ralph Digby, the Elongated Man and we discover that each of the winning original Justice League members have secured a large piece of kryptonite and have returned to their original cave headquarters.  Again it is revealed that the original members have not recognized the newer Justice League members that they have fought!

The next chapter is short, but special, as it features Batman facing off against Green Arrow and Black Canary, as drawn by Brian Bolland.  It takes place in a swamp in either North or South Carolina and has the Batman swooping down on the other two heroes and within four panels he’s knocked out Canary and has Green Arrow in handcuffs.  Wow a great encounter, in this fan’s book!  But then again, my favorite D C character is the Batman!  Hands Down!

The second to the last chapter features Superman against Hawkman drawn by the legendary Joe Kubert.  It looks like Hawkman may come up roses, only to find out he’s defeated a Superman robot and not the Man of Steel himself!  When the two actually face off, Hawkman is quickly left drifting at the edge of Earth’s atmosphere, to be rescued (?) by a mysterious beam.

It’s at this point in the story that Adam Strange makes an appearance at the JLA satellite and it turns out Hawkman was actually saved by a zeta beam and when he returns to the same spot the JLA are their to bring him savely back to their satellite.

Now the story switches back to the original members, who have regained their senses and realize that the glowing meteors, are not kryptonite, but some kind of eggs.  The eggs hatch to reveal the re-birth of seven would-be rulers of Appellax, from they’re earliest adventures!  The original members fail to win out against these terrible beings, until the newer members track them down and they all join together to face the bad guys!  The now, whole league, overcomes the  evil beings and saves the planet! Yay, plus estranged member, Green Arrow, rejoins the Justice League of America!

I must give this issue a full five (5) out of five (5) Legion Flight Rings!  It’s history, it’s got great iconic characters, drawn by a number of terrific artists, and it’s an excellent story from the pen of Mr. Conway!  A truly excellent comic book and one well worth owning!