Merry Christmas and Happy Holidays!  And because it’s that time of the year, today I’m Retro Reviewing, yes, I just turned my column’s name into a verb,      D C Comics’ Batman # 219.  Well technically, this review will be of the second Batman story in this issue.  The first story entitled; “Death Casts The Deciding Vote” just doesn’t bring the Holiday season to mind, though it’s a fine tale by Frank Robbins, Irv Novick and Dick Giordano.  And the third story, “Time To Kill” isn’t even a Batman story, instead it’s a reprint from the 40’s from The Phantom Stranger comic.

As I said right up front, I’m going to review the Batman Christmas story found between the other two tales.  It’s entitled; “The Silent Night of the Batman“.  It’s a real gem of a Christmas story, written by Mike Friedrich and drawn by Neal Adams and inked by Dick Giordano.  It’s only eight pages long, but it’s what makes this particular issue of Batman special.  The book is cover dated, February 1970 and features a Neal Adams drawn cover which is just so – so!  Take a look … 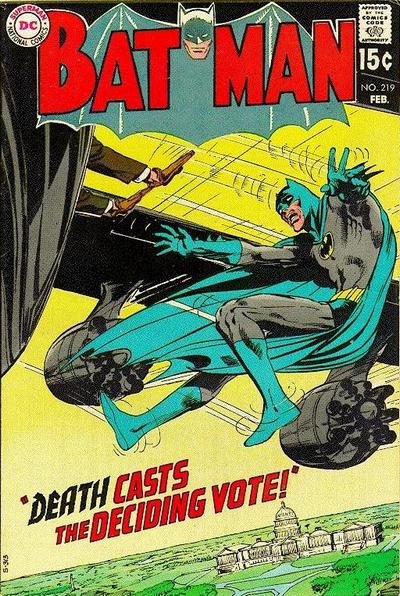 The story opens in Gotham City, with night falling on Christmas eve.  Batman is looking down from a rooftop, onto people going about last minute Christmas shopping.  Everything is peaceful and everyone is happily going about their business.  Suddenly the Bat Signal appears in the sky, shimmering against a snow filled sky.  Batman launches himself off the roof, swinging on his batline!

He meets up with Commissioner Gordon upon the roof of the Gotham Police Headquarters.  Batman expects an emergency, but Jim Gordon explains that it’s actually the opposite.  He’s called Batman in, because Christmas Eve is not the night Batman should be patrolling the streets, he explains.  Batman disagrees, as he and Commissioner Gordon may know this, but crime and disaster can strike at any time and knows not the day or holiday!

The Commissioner says he knows that this night will be different and brings Batman into the station where Batman is asked to join in the singing if Christmas carols.  He agrees, at least until something happens to require his attention.  So Batman joins his “deep vocal chords” to the policemen chorale number!  First up is Jingle Bells and as Batman and the policemen are “dashing through the snow” in song, Friedrich and Adams switch the scene to a young boy stealing a present from a female shopper on the streets of Gotham.  He brings back the gift to three other boys in an alley and they unwrap the gift to find it’s a Batman action figure/doll.

They are shaken by this surprise find, and decide to re-wrap the gift, as best as they can, and the original thief returns the gift to the lady he stole it from!  Friedrich and Adams switches the scene back to police headquarters and Batman and the policemen singers are now singing; We Three Kings, and as they “bear gifts they traverse so afar” Friedrich and Adams again switch the scene, this time to a man walking the streets … with a gun in hand!

The man runs into Batman, dropping his gun!  ???  Well, actually, he runs into a blind man in a Batman costume!  Who is asking people to support the Wayne Foundation’s Christmas Drive for the blind.  The man with the gun then realizes that he has almost shot this blind man, and feels a surge of guilt.  So much in fact, that he tosses the gun in a garbage can and walks away, before commiting a crime that he could never atone for!

The scene quickly switches back to Batman and the singing policemen, who are now singing; Santa Claus is Coming to Town.  And as they sing about Santa making his list and checking it twice, the scene jumps to a depressed young woman crying over a letter from her soldier husband, who is overseas for Christmas.  Or it’s a letter from the Army, telling her of his death.  We really don’t know, but the letter drives her to tears and then to a bridge, where she tosses a single Rose from a bridge, into the water below.  Note the shadow of the Bat on the water!  Nice touch Neal, very nice!

It’s at this moment, that a man jumps from an Army truck passing by.  And it’s her returned husband!  She embraces him and shreds the letter behind his back!  Then it’s once more to Police Headquarters and Batman and the policemen are wrapping things up with Silent Night.  When the song is finished,  Batman realizes that it is 6:00 in the morning, and they have been singing the whole night long and there hasn’t been a single report of robbery, murder, drug peddling or anything!

Truly he exclaims; “the Spirit of Christmas Peace took hold on everyone!”  And with that exclaimation, Jim Gordon fades away from in front of Batman, saying; “But what is the Christmas Spirit, Batman — Might it not be … you … or I?”  Batman regains his senses and finds himself in police headquarters, but all is “back to normal.”  No singing policeman, no Christmas gathering, nothing but the normal police operations going on!

The story ends with Batman swinging away, wondering if his investment in crime fighting in Gotham City has indeed provided this Christmas miracle!

This story alone allows me to give this comic four (4) our of five (5) Legion Flight Rings!

Happy Holidays, all and Merry Christmas from me to you!