I WILL TELL YOU:
Super Santa

As Christmas is nearly upon us, I’d like to repost a column that I did several years ago, where I unabashedly propose a re-imagining of Santa Claus for today’s social climate. I actually posted this here on B2TP a year ago, but since our audience consisted of about six people back then, I thought I’d run it again. If your Christmas spirit remains lacking, consider this my attempt to restore it!

Before I begin talking about the man, let me be clear on one thing: I don’t know Santa Claus. Oh, I’ve met him, mind you, but I haven’t spoken to him in decades. I used to try and keep in touch with him when I was younger, but that was usually limited to brief visits. I really wanted to get to know him better, but it seemed that whenever he was coming to town, he was extremely busy, and just about everybody wanted to talk to him. The only place I ever would see him was inside a crowded shopping mall, hardly a conducive environment for lengthy chats. And when we did speak, the conversation seemed to selfishly center mostly on my own goings-on; my behavior throughout the year, what I wanted to get for Christmas, that kind of thing. I don’t recall ever asking Santa howhe was doing, or what his holiday plans were. At least in person; I used to write to him maybe once a year, and attempt to exchange the usual pleasantries; you know; how’s the wife, how’s the job; how are the elves. But he never responded to any of my letters. I didn’t take it too personally, though; after all, he did bring me the stuff I wanted for Christmas. Most of it, anyway. And according to my friends, he never answered any of their letters, either.

He used to stop by my house, but it was always late at night, after I had gone to bed. It was as though he knew when I was sleeping, and knew when I was awake. My parents used to tell me he even knew if I was bad or good, for goodness’ sake. But I never bought into that part of it, because if Santa knew half of the stuff I got away with, I’d be a coal wholesaler. I made sure my parents never knew of these dastardly deeds, either, because they might tell him. So I never ‘fessed up to that broken basement window, or taking that sip of my uncle’s beer when no one was looking that one Thanksgiving, or that I used to sneak a look at that Playboy in my dad’s bottom dresser drawer from time to time.

Oops. Until now, at least. I guess I feel a whole lot better now after that confession, although my stocking will now be filled with a generation’s worth of coal and every present I ever got will undoubtedly be confiscated. Although, I’m pretty sure that Santa is too kind a soul for that kind of vengeful trick. 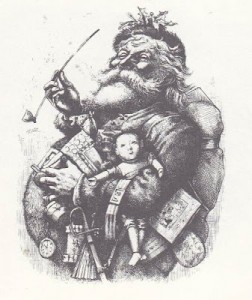 Although the legend of Santa Claus has been around for centuries, as far as I can tell the modern, jolly-old-fat-man Santa that we have come to know has only been around since the 1930s or so. Everyone has seen at least some of that era’s classic Coca Cola ad illustrations by Haddon H. Sundblom; it was Sundblom’s interpretation of Santa over the next 30+ years that had no small part in permanently solidifying that image of Santa in the mind of everyone who was a child since that time. Previous portrayals of Santa that I’ve seen made him appear more like an Alpha-elf; shorter but not much thinner than his portrayal now, but still taller than the elves that toiled for him. Still earlier, Victorian-era images revealed that Saint Nicholas, as he was commonly called then, bore some similarities to today’s St. Nick, although this resemblance was mostly by virtue of his beard and color of his garments.

It’s fortunate that this modern incarnation of Santa was born in far more innocent time. And while I’m glad it endures today, I somehow think the idea wouldn’t go over so well today if created from scratch. There’s not a parent nowadays who doesn’t shudder at the mere thought of a strange old man enticing their child with candy to come over and sit on his lap, so in modern times that’s hardly a template to use to create a timeless holiday icon. I don’t think the whole idea of sneaking into our homes while we’re sleeping would go over too well, either. And in some parts of the world, his trademark “Ho ho ho!” has arose such a clatter that it’s been banned because it’s seen as racist and sexist. 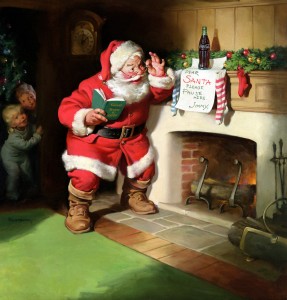 In our more cynical age, Santa Claus has become Santa PClaus; you know, PC as in Politically Correct. No more ho-ho-ho-ing in Australia; Santa now has to chortle, snicker, guffaw, or cackle in some uncharacteristic manner unbefitting of a man with such a jolly reputation. At some malls, children now sit next to Santa, rather than on his lap. And a few parents I know, in an attempt to instill a better sense of peace-of-mind in their children, tell them that Santa no longer comes inside the house via the chimney, but instead leaves the presents on the front porch for Mom or Dad to retrieve and put under the tree.

And there are other, modern concerns that plague Santa PClaus. Is he violating labor laws by working his staff so hard around the holidays? Should animal rights activists be alarmed by Santa’s seemingly abusiveness towards the eight, and sometimes nine, reindeer that have to pull his sleigh around the world? And what kind of performance enhancing drugs must he be taking for such an aging and out-of-shape man to endure such a grueling itinerary and fit down so many narrow chimneys?

Has the time come to reinvent this legendary holiday icon once again? Has the evolution of Santa Claus to Santa PClaus necessitated another reimagining more drastic than the elf-to-man transformation of several decades ago? Has the time come for Santa to evolve from man to . . . Super-man? 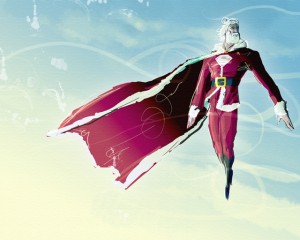 Yes, I believe it has. For the tasks at hand for Santa in today’s complex and ever-evolving world require a presence that is larger than life, for a mere human can no longer undertake what has become a superhuman effort. We need a Santa with powers and abilities to carry him through the 21st century. And with that in mind, ladies and gentlemen, I give you . . . Super Santa Claus.

That’s right, Super Santa. As in, Superman. Superhero. You know, super. Because after all, when you think about it, doesn’t Santa meet the qualifications of a superhero? He’s got superpowers, for one thing. Like super speed, for instance, which allows him to visit so many homes worldwide in a single night. And super vision, which is how he really knows when you are sleeping. He can read minds, as witnessed by all of those presents that we found under the tree even though we forgot to mention them in our letters and visits. He can’t fly, perhaps, but his reindeer can. He can replicate his form and be in many department stores all at once. He can alter his appearance, especially his weight, the length of his beard, and even his voice, which explains why he doesn’t always look or sound exactly the same. He wears a colorful costume. He’s adored and worshipped by countless citizens of the world. He’s got a really cool mode of transport, and he’s got a fortress at the North Pole.

I rest my case.

But if Santa already has such powers, then the transformation to superhero has already begun to take place. Clearly, his powers have been developing over time, as he by most accounts started off simply as a super craftsman and toymaker until it was apparent that his abilities surpassed those of mortal men. Perhaps he’s a mutant, who knows. But it’s clear that his powers have evolved over time, to the point of legend.

Maybe his powers will continue to evolve. Perhaps he could learn to fly, thereby negating the need for reindeer to transport him, and maybe Dasher and Dancer and company can live a peaceful life of retirement at the North Pole. Perhaps an expansion of his mind-reading powers would eliminate the need for a whirlwind holiday shopping mall tour, enabling him to read children’s minds from a distance and discern not only whether they’ve been good, but what they’re hoping to find under the tree Christmas morning. Perhaps he can even learn to teleport children’s presents from his sleigh directly to the Christmas trees inside their homes, and then he won’t even have to get his suit dirty.

But Santa’s most important powers are those that he has always had. He has the power to bring joy into the lives of children and adults alike, despite what seems like an ever-growing and worsening set of problems in our lives and the world in general. He has the power to bestow a piece of our own childhood back into our lives, one of the few pieces that has remained mostly unchanged from what resides in our memories. And he has the power to remain an icon for a time of year that, if you let it, still carries a special meaning amidst the hustle, bustle, and stress that it sometimes creates.

And he’s had the power to endure the changing times, from an era we call more innocent to one we believe to be less so. We’ve had world wars, and smaller ones. We’ve endured terrorist attacks, social unrest, and political divisiveness. Yet, amidst all of this, we’ve always taken the time to acknowledge the special season that is Christmas, a time that at once helps us distract us from our troubles while at the same time gain a little strength to deal with them. Perhaps that’s yet another power Santa has: the power of healing.

So maybe in these changing times, perhaps parents do in fact need to come up with some creative explanations as to how Santa gets his presents inside their homes, or why maybe it’s better to sit next to Santa instead of on his lap. But, after having to explain how he can visit millions of homes in one night or squeeze down a chimney, it shouldn’t be too tough.

After all, look at all the truly amazing things he’s done for so many people, and for so many years. He really is Super Santa.

Merry Christmas to all, and to all a Good Night.