Hey kids, comics!  And this week I’m looking at The Brave and the Bold # 84, from D C Comics, cover dated July 1969.  As I am sure you know Brave & Bold was DC’s Batman team-up book.  It didn’t start out that way, but that’s what it turned into a couple of years before issue # 84 was published, so by this time it was well established as the book where Batman met and teamed-up with other heroes in the D C universe.  Here’s the nice cover drawn by Neal Adams! 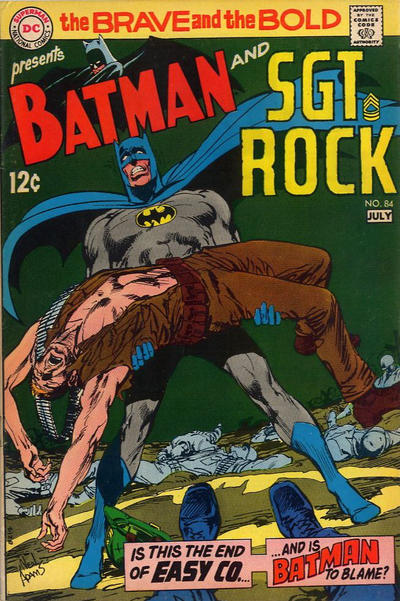 As you can see by the cover scan, Neal drew the cover with Batman clearly in his own style, but Sgt. Rock in the style of Joe Kubert.  Heck, he even signed his name in the style of Kubert!  Notice this at the bottom left hand corner.  Obviously Neal did not normally sign his name in this matter, and as far as I know, it’s the only time his signature appeared this way!

The book opens with Bruce Wayne being contacted by the curator of Gotham Museum, regarding a statue of the Archangel Gabriel in the museum’s possession.  This leads back to Bruce remember an adventure that took place during World War II, where he had been in London studying British methods of dealing with saboteurs.  He meets an old friend who is killed, and as his dying wish, asks Bruce to to carry information to his superiors.  Bruce does so and meets Winston Churchill.  Bruce volunteers to fly to France in the company of Sgt. Rock and Easy Company and complete his friends mission!  Rock & Co. had a separate mission in France, as it turns out, to blow up a certain bridge.

Bruce, undercover, poses as a wine merchant and attempts to by a certain chateau’s stock.  It turns out that the “wine” is actually nerve gas!  Upon discovering this, Bruce makes his way back to Rock & Co., only to be followed by the Germans, led by Colonel Von Stauffen.  It is at this point that Bruce dons his famous cape and cowl, as Batman and leads the Germans away from Rock & Co.  Along the way he rescues a group of French hostages from a firing squad!

Eventually the bottles of nerve gas are hidden in a number of hay wagons that Von Stauffen has sent out of the chateau and across the bridge at Chateaurouge.  Rock’s orders were to wait until dawn to blow up the bridge, but as the wagons cross the bridge, Batman throws himself on the detonator, destroying the bridge and all of the nerve gas!

Back in the “present”, the very same Von Stauffen reveals himself to Bruce Wayne and plans to regain his “lost treasures”, including the statue of the Archangel Gabriel, thus bring the story full circle!  It is revealed that the stone statue was actually gold underneath a stone!  As Von Stuaffen rediaed to shoot Bruce and his curator friend, Sgt. Rock leaps out from behind the statue and knocks out the Nazi!  He reveals that he was returning from Europe on furlough, and saw Von Stauffen in a seat nearby and followed him, since Von Stauffen was a wanted war criminal.

The story was entitled; “The Angel, The Rock and the Cowl” and it was written by Bob Haney and pencilled and inked by Neal Adams, though Joe Kubert was credited for inking page 19.  I highly recommend this particular issue.  Though did it feature the Batman of the Silver Age?  The Golden Age?  Earth Two?  You’l have to be the judge of that.  During Haney’s run on The Brave and the Bold, he teamed Batman up with a number of Earth Two heroes without ever explaining how they managed to meet.  So it is quite possible that this story features a different Bruce Wayne/Batman that the one we were reading about in Batman and Detective Comics in 1969.

So pick it up if you get the chance, you won’t regret it.  And for the record, I give it four (4) out of five (5) Legion Flight Rings!