Picking up from his first appearance and origin story in DC Comic’s Showcase # 73 (cover dated April 1968), this week’s Retro Review features DC Comic’s  Beware The Creeper # 1, cover dated June 1968.  It features a very nice Steve Ditko cover, that he provides both the pencils and inks for, showing a rain spattered cityscape with the title character in the foreground and the villain of the story lurking in the background.  The title of the story is also featured on the cover and is; “Where Lurks The Menace?”.  Though that may lead the reader to think that the villain’s name is the Menace, when is actuality, its the Terror!  The story itself is plotted by Steve Ditko, written/dialogued by Sergius O’Shaugnessy (a nice irish name for Saint Paddy’s day, appropriately enough) and pencilled and inked by Steve Ditko.  For those not in the know, Sergius O’Shaugnessy, is the pen name/alias of Denny O’Neil. 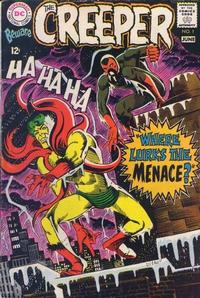 A lovely Steve Ditko cover from 1968

The story opens with the villain, The Terror, breaking into an apartment and killing a man named Jurgen, who obviously knows something about the Terror and entends to sell this knowlege, to the television station that Jack Ryder, aka The Creeper, works for.  Ryder works for the station as a Television Network Security Investigator.  Ryder arrives late, but does witness the murder, but he can’t stop the murderer from fleeing the scene.  Jurgen does manage to name a couple of names before dying, a Gerk Kreg, a Vance Cleary and a Hack Axeley.

He decides to uncover the Terror’s identity and goes about working over mobsters, including Gerk Kreg (a pretty typical strange sounding Ditko name) in his guise as the Creeper.  In Showcase # 73, Jack was given greater strength and stamina by Professor Yetz, before he is killed.  Isn’t is funny how many scientists manage to give people great powers moments before their lose their own lives, therefore ensuring that no one else will ever have the same powers?

But back to the story, Jack Ryder considers Kreg as a pretty good candidate to be the Terror.  He transforms into the Creeper and spends four pages mixing it up with Kreg and his goons, but meets a deadend.  He then decides to visit Hack Axeley, who turns out to be a private detective.  It also turns out that Vance Cleary is Axeley’s lawyer.  Axeley doesn’t provide any useful information, so Ryder next visits the lawyer Cleary.  Cleary gets upset and tosses Ryder from his office!

Ryder returns to his apartment, with the station’s weathergirl, Vera Sweet, only to be attacked by the Terror!  Vera’s screams drive off the Terror and enables Ryder to transform into the Creeper unseen.  After a couple of pages of the Creeper and the Terror mixing it up, the Terror manages to slip away.  The Creeper decides to pay a visit back to Axeley’s office, where he tries to frighten Axeley’s secretary, Ida Horn, into giving him a lead, only to find the Terror hiding in the office.

Once again, battle ensues and Ditko gived us a couple more pages of the Creeper versus the Terror in great action scenes!  Ida enters into the fray, as well, but on the side of the Terror, which is a nice twist!  The Creeper manages to hold off Ida and unmask the Terror.  I won’t spoil the surprise by revealing his identity here.  The Creeper defeats the Terror, as well as, a bunch of Kreg’s mobsters who had followed the Crepper to Axeley’s office and turns them all over to the police.

Ditko and O’Neil end the story with Jack returning to his apartment where Vera Sweet is waiting, madder than a wet hornet!  He pretends to hear something outside the window which frightens Vera into leaving and the first issue, though second story, of the Creeper ends with Jack Ryder sitting on his couch giving out a hearty laugh that is quite similar to the Creeper’s fearsome laugh if there was anyone left to hear.

Not a bad first issue at all.  Ditko’s art is in top form and the story is entertaining and the mystery of the Terror is handled honestly and the reveal isn’t a complete surprise, if you picked up on the clues left throughout the story.  And this first issue appeared on the stands a scant two months after the character was introduced in the Showcase book.  Therefore I give it four (4) out of five (5) Legion Flight Rings and recommend you keep you eye out for this short lived series (it only made it up to issue #6) before it was cancelled, but the character of the Creeper remains to this day as a little used hero within the DC Comic Universe!