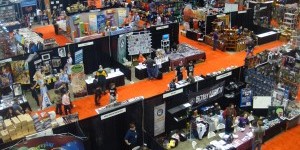 One of the nice things about writing for an industry magazine is that I get some degree of inside access to various conventions and catch a lot of things that most attendees wouldn’t have the opportunity to see. Unfortunately, though, this magazine often makes me work for it; they want me to write like, reports and stuff. 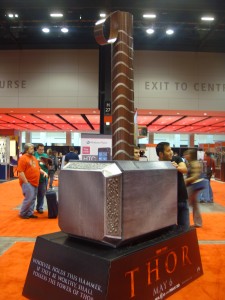 The guy behind the hammer isn’t worthy enough to move it.

But I won’t bore you, the loyal BTTP follower, with such mundane trivialities. No, instead I’ll try to share with you the real interesting stuff; stuff that is pretty stupid and meaningless, but like most pop culture TV, that means it’s much more fun than some highbrow report that no one wants to read anyway.

In the case of C2E2, the first three hours of the show are open only to industry professionals, so while there’s some activity on the floor, it’s a much more quiet and sedate atmosphere than when throngs of fans start crowding the aisles. It’s almost eerie; like a concert where no one is cheering. 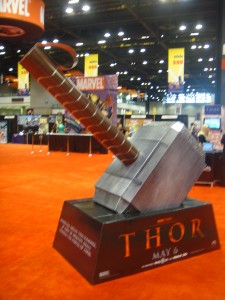 The hammer remained where it was, despite the guy’s futile efforts.

The shot from the mezzanine was taken during this pro-only period, and without knowing that one would think that if the show were open, that it would be lucky to last the weekend before exhibitors packed up early and cut their losses. I was hoping to do some networking during this period, but it appears that a good number of the exhibitors came down with a bad case of, well, post-St Patty’s Day blues. It’s an epidemic, I tell ya. So there weren’t a lot of creative types here yet, so I did the only other thing I could do: start spending my money.

But while doing so, I happened upon a guy at the Marvel booth trying to do something that has long been acknowledged as impossible. You would think that someone who works for Marvel would be the first to know this, but no. As you can see, this guy was trying to move Thor’s hammer. This guy obviously didn’t have a case of post-St Patty’s Day blues; he must have still been flat-out drunk to try such a feat. Better people than him have tried to move that big Effen hammer, and failed. As you can see in the subsequent pic, he finally just gave up and left it. 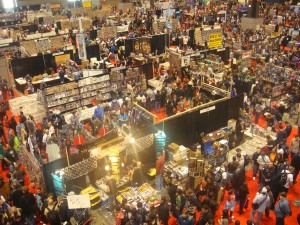 This was taken far and safely above the crowd.

So, if I see more of this kind of thing, I will tell you all about it. Or better yet, I will show you. Stay tuned. 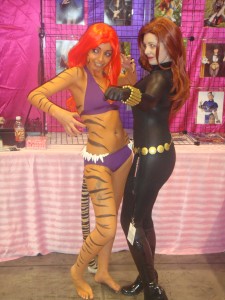 Tigra and The Black Widow drew quite a crowd. Wonder why.

As often is the case on Saturday, the show was absolutely packed, as is pretty apparent in the new overhead photo. Undoubtedly, this was largely due to the large number of ladies who attended decked out in many fans’ favorite characters. Even Artoo Detoo showed up and felt some love. 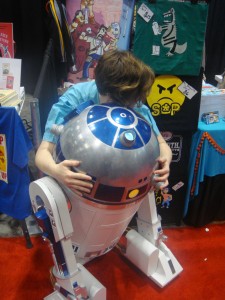 Artoo gets some lovin’.

Category: Comic BooksBy Jim JohnsonMarch 18, 2011Leave a comment
Tags: I Will Tell You