This past weekend was one of the most awesomely fun weekends I’ve ever had.

What was so awesome about it, you ask? Why, thank you for asking; I will tell you!

Last Thursday was like one of those cosmic convergence things, like when the stars and planets all align in a certain way and when you connect the dots you get a drawing of Farrah Fawcett. For last Thursday was not only St Patrick’s Day, but it was also the eve of C2E2, a comic book show that has quickly become a favorite for fans in the Midwest. Add that this convergence occurred in one of the coolest cities anywhere, even when it’s not St Patty’s Day, and you have a weekend destined for greatness. Greatness, that is, if two of your favorite pastimes are comics and drinking, which, in an amazing coincidence, are also two of mine. 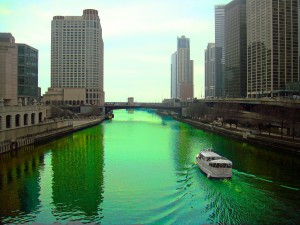 Yeah, it's photoshopped. The real green had washed away by the time I saw it. On St Patty's Day. THAT'S what's wrong with this picture.

O’Toole’s, Guinness, shots, walk to the river, O’Callaghan’s, more Guinness, spot the infamous cheezeborger cheezborger place, stumble back from the river, Hooters. At least I think that’s where we ended up. Can’t remember what I drank, either. End St Patty’s Day party.

Upon the dawn of C2E2 the following morning, adorned in an emerald green St Patty’s Day Drinking Team tee shirt scored from O’Toole’s the day before, I was repeatedly mistaken for a con staff person, who were also adorned in emerald green tee shirts. While it’s kind of cool to try and be topical, perhaps it never occurred to the organizers that there would be others dressed in similar colors. When asked where the restrooms were, perhaps responding “When you find ‘em, lady, let me know” wasn’t the friendliest response. But hey, I had been drinking all day before, and the effects still lingered, so maybe I was a little crabby being up so early.

While the con remained at Chicago’s McCormick Place where it kicked off last year, it had relocated to another building in the complex on the other side of Lakeshore Drive. Meaning, no more beautiful view of Lake Michigan from the concession area, but there really wasn’t all that great a view on the chilly, cloudy days that dominated the weekend, anyway, so no big. However, the West Building lacked the variety of concessions that could be had the prior year. Essentially, you could get Really Expensive Hamburgers and Hot Dogs, Really Expensive Italian Food, or Really Expensive Sandwiches. At least last year, there were kiosks where you could get Really Expensive Other Stuff, like a Chicago-style hot dog.

And, the food must have had an adverse effect on many an attendee’s constitution, for many fans appeared to have to camp out for a coveted stall in the restroom. At least for the guys, anyway; ladies, I cannot supply a firsthand account of the waiting status for your restrooms, sorry. But either a lot of fans just couldn’t find a seat to read the comics they had just purchased, or something else was afoot with the food that I don’t care to discuss just in case anyone’s reading this during the dinner hour or their lunch break.

Hey, I promised you in-depth and behind-the-scenes con observations, and I assure you, few other sites are shuffling around this many electrons talking about these kinds of things. 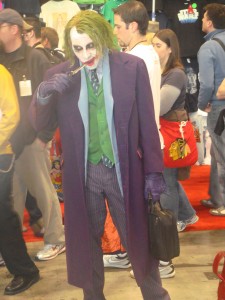 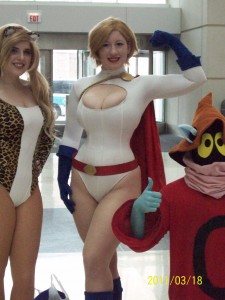 But getting back to the fun part, C2E2 was a blast. I bought way too many trade paperbacks than I could carry, afford, or have time to read. I saw a number of familiar faces, and made some new friends. And had a blast taking pictures of fans dressing up as their favorite characters, such as Power Girl, The Joker, Power Girl, The Kingpin, Power Girl, and Power Girl. And outside the con, the festivities continued around town. Even though St Patty’s Day was over, well, it just seemed a shame to have to stop.

So I already look forward to next year, regardless of whether another such cosmic convergence occurs or not. At least now I know some new bars to hang out at . . .

Category: Comic BooksBy Jim JohnsonMarch 22, 2011Leave a comment
Tags: I Will Tell You