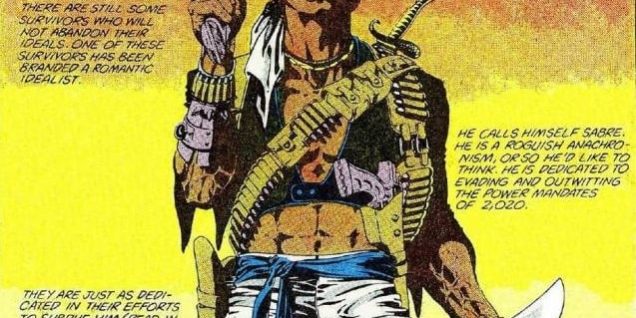 This week I bring to you, Eclipse Comics’ Sabre # 1 & 2, cover dated August 1982 & October 1982.  These first two issues of the new series from Eclipse Comics, though it actually repints the graphic novel, Sabre, published by Eclipse, four years earlier.  All on-line information I could find says the graphic novel was published in October 1978, but my first edition copy, says August 1978, so you be the judge!

These first two issues reprints the original story of Sabre, and his campanion, Melissa Siren, for the first time in color.  If you’ve never read this story, it’s well worth your time and effort in tracking it down and adding it to your collection.  The story of Sabre is written by Don McGregor and pencilled & inked by artist, Paul Gulacy.  That right there ought to convince you to search out a copy of this exellent graphic novel, or first two issues in the comic book series.  Issue one also has the added bonus of featuring a painted cover by Mr. Gulacy!

The book begins in an alternate future, in the year 2020.  Sabre is the hero, the ultimate freedom fighter, in a world gone mad.  By 2020, our country has been devastated by a nuclear holocaust and the ruling powers, led by the villainous, Overseer, have all but gained control of the world.  Despite their prisons and concentration camps, a few individual souls have escaped and as in the case of Sabre, even dare to fight back.  It seems that McGregor is taking the freedom fighter storyline from Marvel’s Killraven series, that he wrote previously and running with it.  Though, this story may be similar, it really is totally different.  Sure it is!

The story opens with Sabre, who Gulacy draws looking like Jimmy Hendrix, traveling along a body of water, heading towards a castle complex in the distance.  It opens in silence and reminds me a bit of the movie trilogy, The Man With No Name series, starring Clint Eastwood.  After the intial splash page, we get two pages of background history to summarize the world that Sabre inhabits.  McGregor then introduces the reader to Melissa Siren and provides us with her background, as well.

Sabre enters the complex, and it turns out to be an abandoned amusement park, similar to Disneyland.  It’s even got a teacup ride and a pirate galleon ride, etc.  His stated mission is to rescue other free humans that have been captured by the Overseer.  The bad guys are introduced, the evil Overseer, his lead mercenary, Blackstar Blood, as well as, his henchmen, Willoughby, drawn by Gulacy to resemble Woody Allen, as well as, an ani-human, Grouse, a construct made by man, blurring the lines between human and animal.

Sabre does away with a couple of bad guys and Melissa joins up with him.  They wander through the park and eventually, after an amourous interlude, which was pretty racy in a comic back in 1982, they make their way to the pirate galleon ride, where they set sail, awaiting the arrival of the villains.  Sailing after them in another ship Blood and his companions ram Sabre’s ship and all hell breaks loose!  Sabre and Melissa are captured and the first issue ends on that cliffhanger!

Issue two begins with the evil Overseer erasing Sabre’s memories, one by one, in order to turn Sabre into one of his mindless slaves.  Once this is done, Sabre is forced to watch the rape of Melissa Siren by Willoughby, Grouse and an animatronic skeleton.  Blackstar Blood rebels at this horrendous action and decides to break from the Overseer.  Meanwhile, the Overseer releases Sabre, only to find out that he has been “playing possum” and he lashes out at his capturers.  We also see that Melissa is not helpless either, as she strikes back, and manages to destroy Grouse and the skeleton and she enlists Willoughby’s help.

The Overseer and Sabre face off against each other with swords and a multi-page battle ensues.  Eventually Sabre prevails, with the help of Blackstar Blood, though theyagree to part as respected enemies by the end of the second issue.  Sabre and Melissa also part in a one page epilogue, where she reveals that she is pregnant with Sabre’s child.  But that doesn’t stop Sabre from going off to take down the Overseer’s armies, promising to return, with a “I’ll be Back”, but ultimately leaving Melissa standing alone on the seaside.

Maybe a less than satisfing ending, but clearly McGregor was going for the macho man image, of his hero having “to do what a man has to do” kind of thing, while leaving the helpless female behind in safety.  A little condesending maybe, but I still give this two issue, color reprinting of the original graphic novel, five (5) out of five (5) Legion Flight Rings!